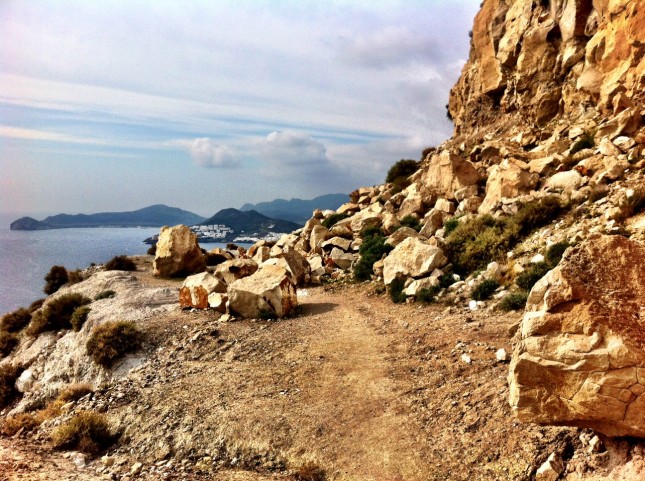 Sometimes things do get decidedly rough. Fortunately this didn’t block our path, but was a little comedic nonetheless. Once past this the track really did get beyond a bicycle, and ignoring the waymarkers along what appeared to be good track we came to a point where the cliff had fallen and it was necessary to indulge in some proper portage. Walk up the slope to check that it was going to improve, take panniers off bike and then carry bike up slope, then go back to help Mel, then go back for panniers. A 5 minute diversion but all adds to the entertainment.

San Jose itself was sleepy but with the all important supermarket, although we opted for the minimum of provisions, followed by Paella and beers by the little harbour which were very agreeable. Then along the road for a bit followed by a footpath that led us back to the campsite but still glad that we’d decided against the egg purchase, lest they be scrambled in their raw state.

Back in time for some laundry chores before heading back to the camp restaurant for Wednesday night special, three courses us a glass of wine for €6 which can’t be argued with, although the portions would have passed as tapas anywhere else. But we had a table with about 8 other Brits so had a nice sociable evening and discovered more about the over-wintering lifestyle that all of the others were here to enjoy. We got invited back by Keith and Sue for a cup of coffee and further chats which was great. A lovely evening, much like a pub evening at home.

Tomorrow I think a day of solo mountain biking beckons. Travel light might be the order of the day, given the state of some of the local tracks!