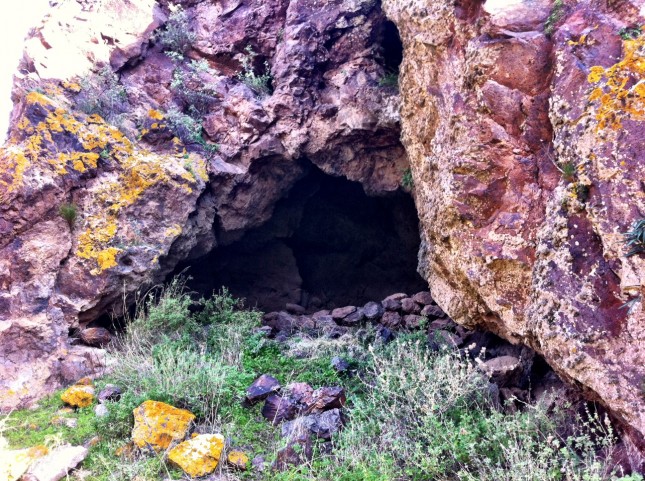 A Habitable Cave in the hills of the Cabo de Gata

This is more than large enough to make a home, about 7′ at the mouth, and at the rear left there is a space that disappears into to the rock. Too dark to see if you could physically get in there, but tracks in the sandy floor suggest that some animals have been in and out. This could well have just been dogs belonging to walkers, I couldn’t make out the footprint shape. There were bones on the floor, although they looked like chicken thighs, so probably just from picnickers. There were a number of other smaller caves in this area.

Talking of habitable caves, we were chatting with an English chap in the campsite bar the other evening who sells ‘[cave houses](http://www.atalayadenijar.com/incasab.html)’, further up in the mountains. Apparently the English are mug enough to buy them – the advantage is that the cave part of the house stays at a constant temperature all year around, so comfortably cool in the summer. Being in the hills, its just cold anyway, which is why he was camping down on the coast where it was more agreeable. Should you be interested, there is a glut of cave houses at the moment (no doubt along with regular houses) due to the state of the European economy, a lot of second homers have just closed them up and will take silly amounts to get rid of them.