Our inaugural ride for the Rough Stuff Fellowship in the South West. I must admit, I wasn’t expecting a huge turnout for the first ride, all very early days yet and my initial email to the South West members didn’t get much in the way of a response. But I had set my expectations suitably low, and by 10:05 we had assembled a group comprising of, well, just me. No problem, at least I get to be the soul architect of the days route, so can please myself.

The first job of the day is getting out of the Staple Plain car park and onto the hills proper. I’d already cycled 3 miles from home at Watchet, which required 180 metres of climb, with a good chunk of that in the last quarter mile into the car park. Despite the 15 minute breather, I was still somewhat pooped by such a stiff start, so I opted for the slightly more gentle track leading around the west side of Beacon Hill. As you round the summit, you get a nice view across the Bristol Channel, and the unsubtle boxes of Hinkley Point Nuclear Power Station. 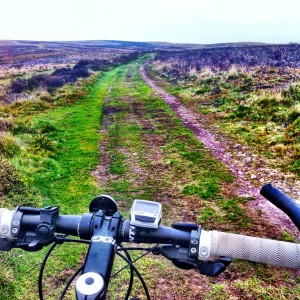 The Road Ahead on Beacon Hill

The track levels out and is lovely and smooth as you make your way along the top. The bridleways here are in superb condition, despite some recent rain and still some puddles lying about, but the going is firm, with grass nibbled short by the assorted ruminants of the moors. I quickly passed by Bicknoller Post (although failed to see it as I was admiring the view), and found myself at Halsway Post. 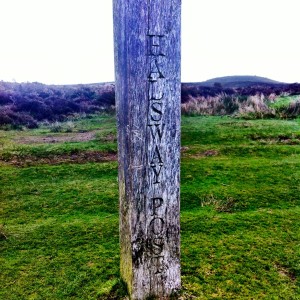 A slightly stiffer climb up onto Hurley Beacon, you can find out a bit about the settlers here from 4000 years ago and their use of the hills as burial sites. The fire beacons that are still lit here are probably a hangover from the funeral pyres that they once made here.

The first bit of vague civilisation is Crowcombe Park gate, a popular spot for visitors to park and enjoy the hills, but its still a bit early and there are very few about. I start finding small groups of sixth formers who are out doing some orienteering. Must be a good school, as they are all chirpy and polite with their hellos. 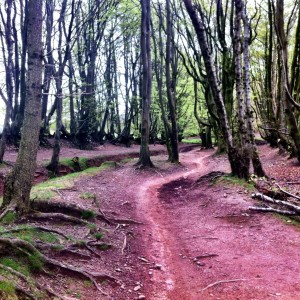 Into the Woods at Fire Beacon

There is a wooded avenue above Crowcombe with multiple tracks to choose from, some boggy but others dry, and with a good surface beneath its fun picking your way through the trees at some speed. Eventually you emerge from the woods and climb onto the hill known as Wills Neck where there is a trig point and some grand views. I’m able to pick out the town of Wiveliscombe where I have a house, although at first I find it hard to make out which field boundaries I recognise, but eventually nail down which one is home. 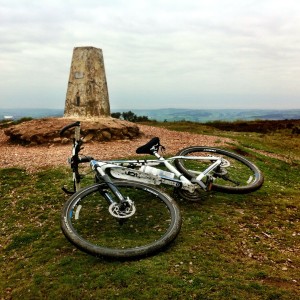 I encounter a small gaggle of wild ponies that have managed to wedge themselves into a gateway. Some horse riders had passed through and given them some interest, and I think the ponies wanted to get through the gate and gallop after them. The gateway was on one side of a deep hedge, and so it created a sort of corral. As I approached I started to shoo them away and they sloped off, bar one who was a bit nervous of me and didn’t want to get out of the way, so I backed off a bit and he soon came out and let me pass.

As I crossed Lydeard Hill there were more wild horses, several with young foals, although the one in the photograph looked a bit big to still be at the teat. 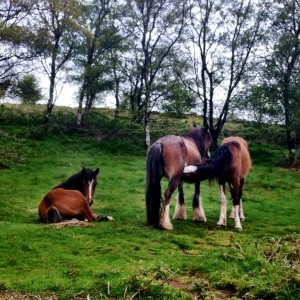 Mare and Foal on Lydeard Hill

You pop out of the woods onto a quiet county lane, so I quickly covered the next couple of miles to Timberscombe. I decided to head off towards Fyne Court, a National Trust property, for refreshment. Another mile or so of quiet lanes, and then disaster struck. On arriving at Fyne Court, the damn tea room was shut due to staff shortages. I’d noticed this a week before on their website, and when I checked the night before, the notice was gone, so I assumed it would be open. A shame, and I wasn’t the only one grumbling under my breath.

So I set off again back towards Timberscombe and the Pines Cafe/Restaurant at the junction. Not a very interesting selection of cakes, but I refreshed myself with a Panini and coffee which just about ticked the box.

On leaving, I crested the hill and then took a left turn on the road towards Merridge. Once into the village, I picked up a bridleway heading towards Hawkridge Reservoir, a spot I’ve seen on the maps many a time but never visited, so now seemed like a good opportunity. Alas, this bridleway was not very cycle friendly, badly cut up by horses and quite soggy in places, I think it might have inspired the invention of the Hovercraft, but I walked and persevered and once on the downslope was able to remount, although the forestry activity on the other side of the hill had also left its mark on the track, so it was more of a slide and a slither that took me to the reservoir. 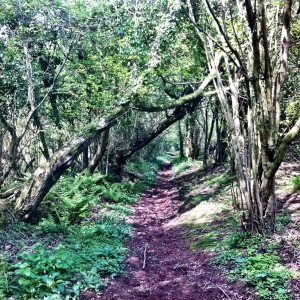 On emerging from the woods, the reservoir was in front of me, and what a pastoral scene it was. I think J.R.Hartley himself was amongst the several boats and shore bound fishermen casting their flys across the water. 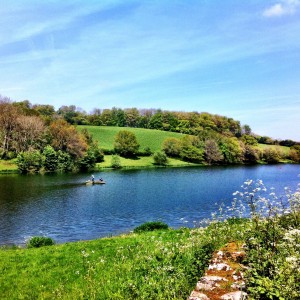 I took the road around the western side of the reservoir, over the bridge and then onto a bridleway that opened out into fields. Such a nice thrill to be cycling on grass, although it was a little too steep at first and required a dismount. As I remounted and got underway again I came across some Longhorn Cattle, peering at me through the shaggy locks on their heads. They quietly waited for me to take a photograph before, as I set off again, getting a little too quizzical they came bounding towards me. I shooshed them and they stopped in their tracks, but then another, larger beast lurking by the hedge took interest and came charging towards me, which got the others frisky again. I peddled quickly through a open gateway, and fortunately that was enough to get off their turf and the chase subsided with a few snorts. I’m not sure if the large was a cow or a bull its kind of difficult to tell with the Longhorns with all that hair hanging down. 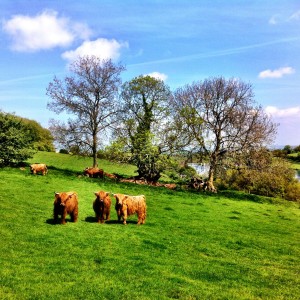 I got carried away once back on the roads and missed a turn, but it was pleasant on the level roads to just peddle along. The map showed a track that avoided going into Nether Stowey, so I took that, but it quickly deteriorated into a boggy but grassy morass. More walking, then I was able to intercept the Coleridge Way (created in memory of Samuel Taylor Coleridge who lived nearby with Wordsworth). I’ve walked the Way before, and it heads up across a grassy field with some fine views back across Nether Stowey and Bridgwater Bay (and the ever present Hinkley).

A top the hill you find Walford’s Gibbet. The spot marks the place where John Walford murdered his wide in 1789 after a night out at the pub. He was executed on the same spot, and hung in a gibbet as a lesson to others that you should not do that sort of thing in such a delightful and peaceful place. 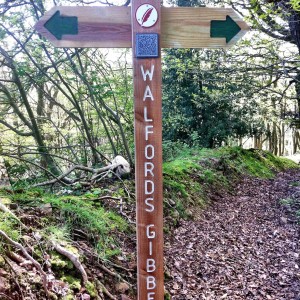 I continue to follow Coleridge, but on the road ascent get cramp in both quads at the same time, which leads to some hopping about like a loon in the road, but fortunately there is no one else about to see it. I follow Coleridge through the woods of Woodlands Hill and then drop down into Holford to take a quick look at the Water Mill that Bryan Adams once sung outside of, declaring that ‘everything he did, he did for you’ (and not the money really). Funny how they chose here instead of Sherwood Forest, as the song was the track used in Kevin Costner’s tale of Robin Hood. But I digress. 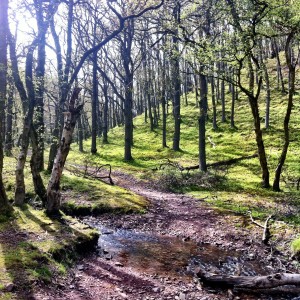 Stream Crossing in the Woods of Hodder's Combe

Leaving the mill behind, I head off up Hodder’s Combe, a delightful valley that leads us back onto the hills, but does so in a gentle and pleasing way. There are several stream crossings here to enjoy. I do get to the point where my legs are starting to tire, but enjoy the walk up around Lady’s Edge until I find myself back near Bicknoller Post. I take a wrong turn here, or at least realise so after a few hundred yards, but find the track around Longstone Hill to be most agreeable. Surrounded by hills, you loose site of distant civilisation and have just the heather for company. Or so I thought, until I saw a handful of deer on the horizon. By the time I’d stopped, one of them had spotted me and kept a beauty eye, but the others were oblivious. Slowly, more deer came over the horizon. Its not uncommon to see up to a dozen deer on the Quantocks, but slowly but surely the numbers continued to grow until there were over 50 heads bobbing about, maybe 200 yards away from me. I kept still, and more were not aware of me, except that first one who just stood, staring at me. One of them started barking, presumably to warn the others, and they all started to become aware of me, and eventually one took off over the hill with the others following, and they were out of sight. What a treat. 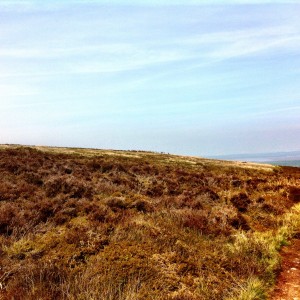 I continued along the track, and then picked up another that doubled back across Longstone Hill and back to Bicknoller Post. It was then a pleasant ride back along the top and then the final, thrilling descent towards Staple Plain. There are a couple of tracks here, one smooth, short grass and another more stoney, so I switched back and forth and allowed myself to pick up a bit of speed for the exhilarating return to the car park. 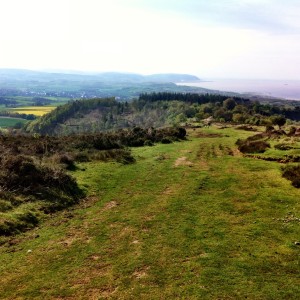 The Return to Staple Plain

The return to Watchet was equally brief, being almost entirely downhill or on the flat, and after missing out on the cake at lunchtime, was rewarded with an ice cream on the marina to round off a perfect day. About 30 miles in all.

3 thoughts on “Rough Stuff on the Quantocks”