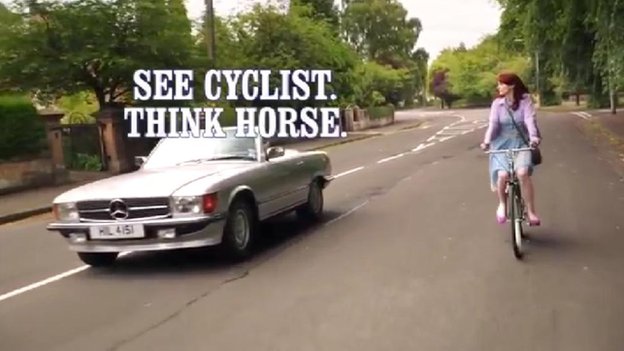 > A television advert promoting safe cycling has been banned for showing a rider without a helmet.

> The advert, part of a campaign by Cycling Scotland, seeks to encourage drivers to give cyclists the same space and care as they would give a horse.

> But the Advertising Standards Authority (ASA) said it should not be shown on TV again as not wearing a helmet was â€œsocially irresponsibleâ€.

This sort of thing absolutely makes my blood boil, not just as a cyclist, but as a human being. Who the feck do the ASA think they are?

* It is not a legal requirement for cyclists to wear and helmet, and neither should it be. Helmets are practical to combat the threat from inconsiderate motorists, not something that entitles you to ride a bike in the first place.

* Inconsiderate motorists force cyclists to adopt a more positive riding position with regards to the curb and parked cars than might be necessary if motorists considered the presence of all other road users.

* Motorists should be passing cyclists by fully entering the right hand lane. The guidance is to leave at least 1.5 metres gap, which by most road standards, given the position of the cyclist (assuming they are not in the gutter) means you HAVE to be in the right lane for the overtake to be considered safe.

* It is not the ASA’s job to dictate cycling policy, only to decide if advertising represents a fair view of society, which the advert in question appears to do,

This is a perfect example of ‘motorists supremacy’ – someone thinking that as a car (or lorry) driver you have the a God given right to the entire road for your own exclusive use. There would actually be more non-motorist road users (pedestrians count too) if only motoring policy hadn’t allowed motorists to bully others off the roads.

For a long time I’ve advocated that all non-motorist road users should wear black ninja costumes. Car drivers might then proceed with a degree of caution.

Sicilian drivers are unbelievably crap, Italians in general but the Sicilians do take the biscuit. Driving proficiency here seems to be based on whether you can hold the keys in your hand. Cars entering a main road seem to do so at will, although no one gets irate about it, it’s more fluid. People just understand that everyone else does their own thing. But they give no space to other road users. I’ve seen horses, cyclists and pedestrians being passed at speed. I was on the left hand side of the road passing horses the other day, and someone came towards me like I wasn’t there, lord only knows where they thought I might go.

It’s funny, that while it’s chaotic, it seems to work because all do they same thing. Although I’d hate to look at their accident statistics!

The BBC further [report that the ASA has lifted the ban](http://www.bbc.co.uk/news/uk-scotland-25960322) and ordered an independant review after agreeing that it’s original verdict was ‘flawed’. Which only begs to ask why people can’t just say sorry these days? Why does it need an independant review, other than as an arse covering exercise? If ‘to err is human’ then what does that say about the ASA if they can’t just out and out admit it?