After finally walking out of the rocky gorge and finding something more rideable, I take a track that leads me towards to the [Gold Mines at Rodalquilar][goldmines]. This is an impressive site, the entrance way is cut through the rock and is getting overgrown and filled with rubbish, but I pick my way through trying to avoid puncturing tyres on the dry and dead remains of thistle type plants, the spikes on which are like razor wire. 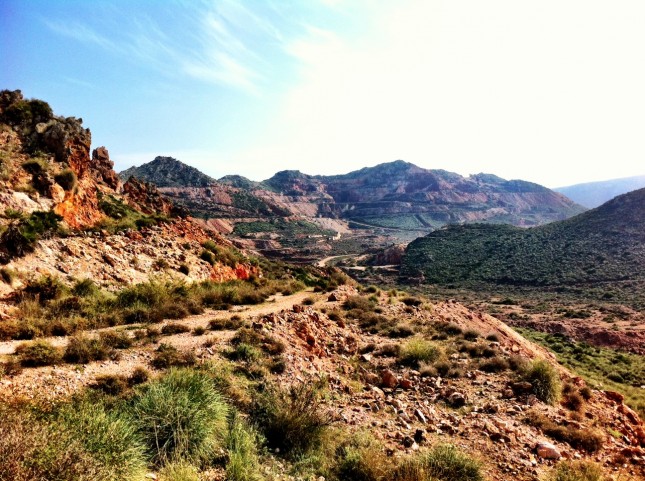 The [Cabo de Gata region][cabodegata] has been mined for probably thousands of years for ores such as Copper, Alum, Lead, Silver and Zinc. Gold was discovered during the 1880’s and many small mining operations were started in an attempt to exploit it. Whilst in some parts of the world gold can be found lying on the ground, or panned from streams, in others, such as Rodalquilar, the [gold is bound up with other ores and must be chemically extracted](http://en.wikipedia.org/wiki/Gold_extraction). Larger scale mining started in 1925 and employed the use of Mercury to separate the gold from the ore, but was not successful. In 1931, another venture was started that used the Cyanide extraction process, and this yielded two tons of Gold before 1936 when the Spanish Civil War forced production to cease.

After the war, the mines were nationalised and production once again commenced, reaching its peak in the 1950’s. The village of Rodalquilar had grown to some 1400 inhabitants, but as forecasts for the gold reserves proved to be over optimistic, the mines were once again closed down, with the result that the village population dropped to around 100. Today, whilst the heart of the village is quite pleasant, it’s apparent around the outskirts that that it is merely a ghost of its former self.

One of the fascinating aspects of wandering amongst the mine workings (there is a distinct lack of [Health and Safety][healthandsafety]) is that whilst the latter production was [based on open-cast techniques][opencast], you can see the old mine shafts and tunnels disappearing into the hillsides, something like you might see when looking at an [ant farm](http://en.wikipedia.org/wiki/Formicarium). You could quite happily wander into the tunnels and stroll around from what I could see, although i decided that as I was on my own, self preservation might be a better tactic. 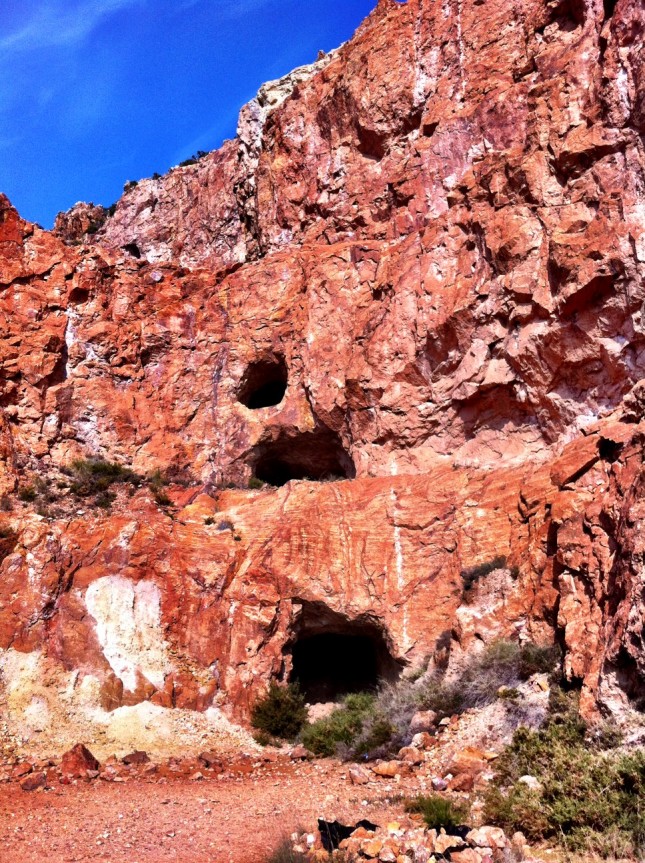 Whilst the ‘experts’ had predicted 150-200 grams of Gold per tonne of ore, an info board at the site suggested that it was only producing 5 grams, falling as low as 3 grams. One assumes those estimates were based on the initial ‘easy’ finds, even though they had proved not to be commercial. No doubt the latter [open-cast mining][opencast] proved to be less labour intensive, but you’d have to conclude that it was necessary to move thousands, if not millions, of tonnes of ore to get such a meagre quantity of gold. No wonder the place looks like someone’s been having a good go at terraforming.

Attempts were made in the 1980’s and again in 1990’s to restart production, but both of these were unsuccessful, and the mines are now closed. There remain a number of mining buildings at various points of the site – I actually missed the main ones just above the village although could see them from the road. From the direction that I entered, there were just a few buildings that looked like offices or store rooms.