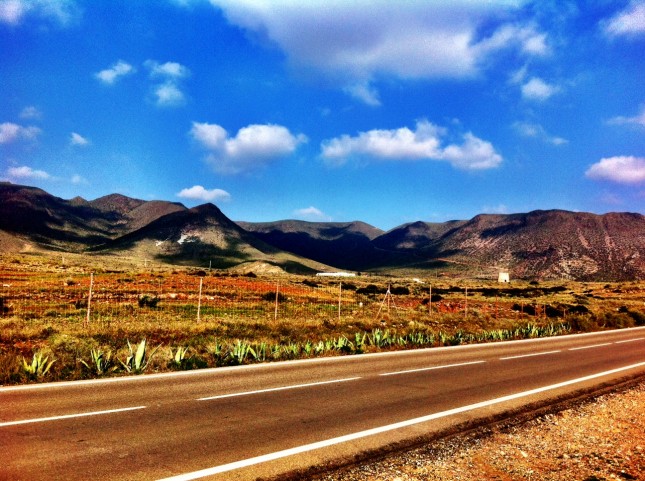 I’m taking a trip on the mountain bike to explore the hills of the Cabo de Gata, the Natural Park in which our campsite lies. Mel will be doing some work whilst I going for a little adventure. There are many walking and mountain biking trails within the park, so it should not be difficult to get around. My first task is to cycle along the road towards La Isletta, then take a gravel access road up towards the Meteorological Station on the rim of the Rellana de Mejada Redondo, the large remnants of a volcano, and one of the highest points in the park (approx 450 metres).

The Cabo de Gata is designated as a Natural Park in Spain ([Parque Natural MarÃ­timo-Terrestre de Cabo de Gata-NÃ­jar][cabodegata]), and the environment is unique in Europe, comprising of an arid, volcanic landscape, sea-cliffs, volcanic sierra’s and a coastal plain of extensive dunes, stony plateau, small lagoons and salt-pans. It covers an area of approximately 50,000 hectares including 40kms of coastline and offshore habitats.

Geologically the park is dominated by its volcanic origin, as seen in its ancient caldera’s, lava flows and pyroclastic rocks which are rich in mineral deposits such as gold, silver, zinc and lead. It is also one of the most arid regions of Europe, with rainfall of only 150-200mm per year and over 3,000 hours of sunshine. It makes the climate more typical of North Africa or the Middle East, although due to its proximity to the sea, its humidity is higher.

The park is home to over 1,000 species of plants and 1,100 species of fauna. The area is designated as a [Special Protection Area](http://en.wikipedia.org/wiki/Special_Protection_Area) for bird-life by the [European Union](http://europa.eu/).