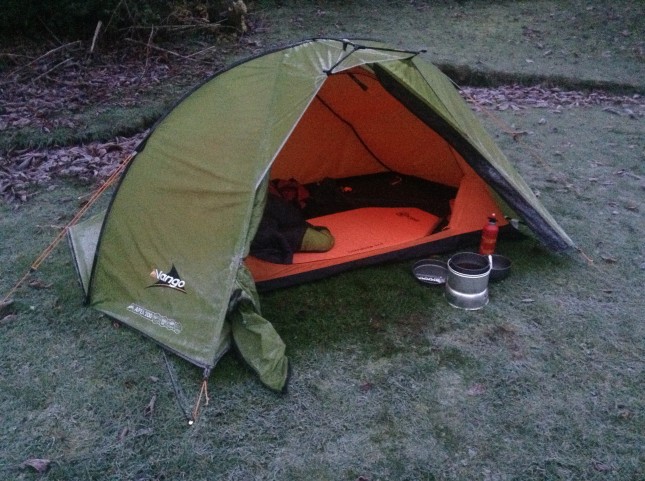 Last night I was able to have a little microadventure, sleeping in the garden on a dry but pretty cold night. This was my first chance to try out some newly acquired camping kit. By the time I went out at 11pm the tent and grass were already covered in a hard frost. The thermometer I took out wasn’t working unfortunately, so I didn’t get a good reading, but the forecast was for -4 Celsius, and it certainly felt pretty nippy out!

The major purchase was the Vango Apex 200 two-man tent. This seems like a nice little tent, really only room for one by the time you’ve got a backpack or panniers inside. A good length for me, although it is easy to brush against the inside of the inner when disrobing, which means you can get a nice little shower from any condensation build up. I need to practice pitching a bit, as is was a little put of skew and the fly was too close to the inner in places.

I was also testing out a new sleeping bag and sleep mat. The mat was a self inflating three-quarter length from Higear, and although you need to apply a bit of your own puff to get it firm enough, it was extremely comfortable. The sleeping bag was the Microlight 950 from Mountain Warehouse – cheap but reasonably effective. I did end up colder than I would have liked, even donning an extra layer in the middle of the night, but the only bit I found a bit cold was my thighs, so think I will need to find some silk long johns to go along with the base layer for a bit of extra warmth. I’ve got a silk bag liner and found that if I tucked this around my legs it helped quit a bit. I had to pull the bags hood over my head and synch in the draw cord so that only my mouth and nose were showing or the chill on the face was a little unpleasant!

I also had a bit of test with my new Trangia 27-7 camping stove (the hard anodised version). This is the spirit burner model, so runs on methylated spirits. It’s a very simple design, although meths can take a little encouragement when it’s cold. The first brew up first thing took a couple attempts to ignite, and a whilst for the flame to bloom, but still I got a cuppa in under 10 minutes which is quite acceptable.

Waking early meant I got to take a walk around the block to watch the sun rising and get the blood circulating again! The final item being tested was a North Ridge Andes Down Jacket, which proved to be super at keeping me toasty when sitting waiting for the brew and gazing at the stars!

Overall I was pleased with the setup. I’m still going to need to bank one little more warmth, but I could easily sleep in the down jacket if things got too critical. Given that the plan is to do more in the new year, there shouldn’t be too many nights this cold, especially if I plan around the weather a little. Mind you, I want to be able to cope with whatever conditions I find!

Current plan is to do some hiking with this setup, then looking at how to get the kit packed for the bike and doing some more cycle touring. Maybe not much time before Christmas, but come the new year I really want to start getting out and about again. Starting to get a little stir crazy after spending the majority of this year on the house renovations, but the end is in sight!