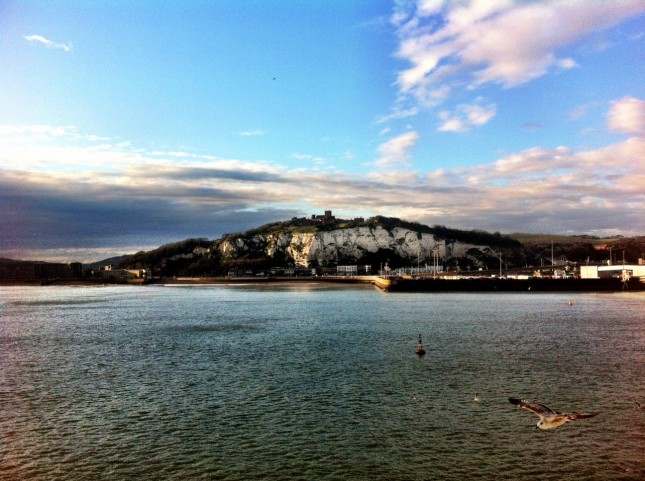 Dover Castle welcomes me back to British shores, after a slightly stirring crossing. Another half an hour of that and I’d have been sicker than the exchange rate in the ships coffee shop when paying in Euro’s. Of course they accept them, at 50% markup! Bless P&O and all who sail in her.

My other uncomfortable experience on the way back was an interrogation by French Customs. I was stopped briefly at Passport Control for someone to check I hadn’t picked up any illegal immigrants. They only wanted to look in the garage, which to be honest was the least spacious place I could have thought to smuggle some if I’d cared to.

Next stop was the French ‘Douane’, the six of them dressed in balaclavas to keep out the cold looked like they were more inclined to storm the Bastille than ask a few questions. The obvious preliminaries were easy enough, where have you been, that sort of thing. What pricked up their ears was a mention that I’d been in Spain. My word, they livened up then! Ok sir, please pull over here, please switch off the ignition and wind up the window (so you can’t hear what we are talking about). Is this vehicle yours? How long have you been? How long in France? What do you do for a living? Must be nice going away for so long! Just wait here while we get the dog handler.

Hello Fido, please don’t mistake the sticky cheese in the fridge for half a kilo of Columbian. And my dirty socks might smell, and a wiff may give you a high like LSD but I can assure you it’s not officially a banned substance.

Ok, so Fido was out of luck and so it was Bon Voyage and Au Revoir’s all round.

The Brits on the other side of the Channel were not so efficient. I was stopped in Customs, by one official accompanied by two more aloof types rocking back and forth on their heels. The official first made for the passenger window, so I moved to wind it down for him, but he decided to change tactics and come to the drivers side, where he realised that I was parked too close to the wall and he couldn’t get past the wing mirror. Having obviously expended all of his effort by this point, he just said ‘oh sod it, on you go’! Nice to know that your tax payers money buys such diligent help.

And I thought I’d made a reservation for the full strip down and internal examination. I do like it when they refuse to warm their hands first, so much more refreshing! Perhaps I should try taking something illicit with me to Poland at the weekend and see if they can do better!

1 thought on “To France, Au Revoir, To England, It’s Good to be Back”