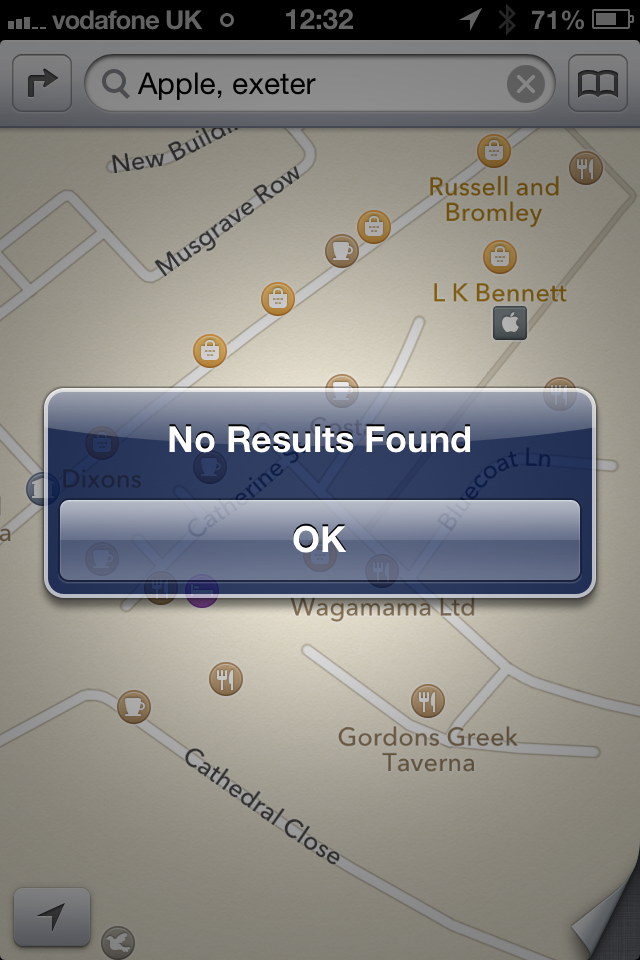 One of my first trips out with the iPhone since upgrading to iOS 6 on the iPhone 4, I went to Exeter for the day, and I thought I would see if the upgraded and much derided Maps app was up to finding some of the shops I knew were in town. There was a new Debenhams store, which we wanted to visit, so I tried that and it found a match that was pretty much in the right place.

As I wanted to go to the Apple Store (I knew where to find it), I thought I would try that, and was surprised that it came back with not found. Yet as you can see from the screen shot, there is a location mark specifically for the Apple store (just below L K Bennet) on the map shown.

Interestingly, a week later, an identical search from my home location does find the Apple store, plus 3 other businesses with Apple in the name. Perhaps it was a glitch and the data was there all the time, just not working for me on that day, or Apple have improved the results in the meantime. However, I now can’t find the Debenhams store which I’m sure came up the other day.

So from a simple and every day expectation, I at least find that the negative press is at least in part justified.

One thing that does impress me with the new Maps, is that the vector nature of the map images now does load so much faster than before, especially when mobile signal/bandwidth is poor. The ability to get a map quickly is easily as valuable as getting a search result but no accompanying map, which in the past was a frequent experience.

Another observation was that when I visited the Apple store, I spent a bit of time with an iPad 3, evaluating if now was the right time for an upgrade. This was a few days before the October 23rd Special Event, so I wasn’t about to splash the cash with a probably iPad mini and possible iPad 4 in the offing, but it was worth making some comparisons with my current experience on the iPad 1.

The observation then was that the 3D capability in Maps was interesting (but not necessarily very useful other than to fulfil curiosity), and is obviously hampered by the lack of 3D data for much of the UK. Also, the iPad 3 had some trouble rotating the view smoothly. I concluded that this wasn’t going to be a worthwhile feature until such time as processor/graphics speed improved, and UK coverage of 3D likewise improved. Now we are post the Oct 23rd announcements, the iPad 4’s improved A6X processor will give a much needed CPU and GPU boost that should help solve part of that problem.

The quicker Apple can address the poor data quality in the Maps app, so much the better, and I thought it rather telling that no mention of Maps was made at all during the keynote. I don’t even remember a screenshot featuring Maps, which just goes to show the level of embarrassment there must be in Apple for not setting the correct expectation. Scott Forstall looked a little uncomfortable in the front row of the audience, and Jony Ive looked like he’d been hitting the weights recently, or possibly been using Forstall as a punch bag!