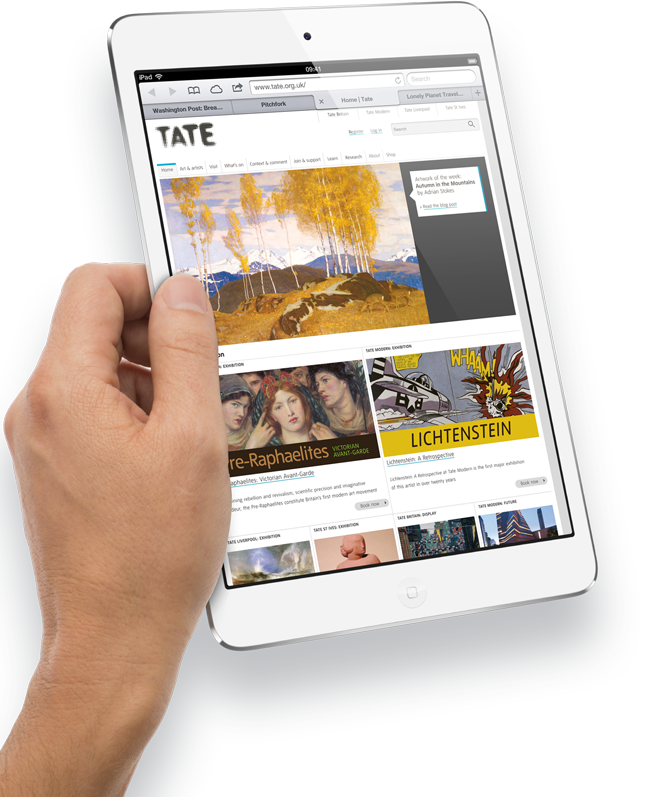 Is the iPad mini an improvement on the original iPad format?

So, finally after nearly three weeks of waiting, the iPad mini has arrived. I plumped for the 16GB with Wifi version, deciding at this point that laying out extra cash for features that might not be used was not worth the cash. 16GB is as much storage as I use of the original iPad, despite it being a 64GB model. 3G/LTE would be nice, like it is on the original iPad, but not essential, given that I still intend to keep and use the original iPad, and will have the ability to tether it to the iPhone for a mobile data connection.

Apple’s trademark simplicity, the packaging is much the same as for the full size iPad. Simple white box in two parts, lid and base. Slide them apart and on top of the pile is the iPad mini, wrapped up in a plastic covering to keep marks off. Lift out the iPad and below is the lightening cable, a very small charging adapter, and a simple packet containing warranty info, a simple card showing what the device buttons do, and a couple of Apple logo stickers.

Its odd, but the box actually felt heavier that I’d expected, but once the iPad is out of the box, you realise how much lighter it is than the original iPad. It almost feels like its got nothing to it.

Initial setup was straightforward, I went for the over-the-air setup rather than connecting it initially to iTunes. This asked a few questions (possibly a few too many for my liking), mostly covering privacy, and also for my Apple ID details. This is very slick if you are already using iCloud for syncing data, as its means that contacts, calendars and iTunes Match data is automatically synced, so you aren’t starting completely from scratch.

It feels nice in the hand, although despite the fact that externally its all metal and glass, its actually has a slightly plastic finish in the hand. I think this is down to the ground edge on the back case – this leaves a sharp line along the edge of the iPad, typically where you are inclined to hold it, and for some reason that imparts a feel of a lower quality plastic case. One thing that you soon realise it that the thinner edge bezel around the display doesn’t compromise your ability to hold the device, and thus you stop holding it by the edges. Instead, its fine for your thumb to rest partly on the display without accidentally triggering touch events in open app. I’ve yet to notice an unintended action when holding it this way.

I’m going to need to get a case for it, having been so taken by the original Apple cover supplied alongside the original iPad. Even after two and half years, that cover still looks and functions just as it should. The new smart covers I’m much less enamoured with from the brief uses in-store. I much prefer the back to be protected as well as the display so you don’t need to be quite so precious with it, and it adds extra grip when you are propping the device against the knee or bed covers. There is a ‘smart case’ for the full iPad, but no equivalent for the iPad mini. So for now, the mini is being used au-natural and given its lack of substance, I’m tending to treat it a little too preciously!

The lightning adapter is a novelty after the 30 pin adapter I’m used to on the iPad and iPhone. Interesting, I find it takes more force than I’d like to attach and detach the cable. I somehow doubt that these are going to prove any more robust than the 30 pin adapter, but time will tell. Personally I’d have preferred this to be a mag-safe style adapter – given that Apple use the technology for the Macbooks, I don’t really understand why they’ve not carried it over to the iOS devices – its one of those technologies ‘that just works’, something that Apple are famed for achieving in so many other areas.

It would be easy to say that the iPad mini is just a smaller iPad. Actually, you need to understand that just what it is, but what is remarkable is that Apple have managed to shrink down the components from the iPad 2 and fit them into such a smaller package. The fact that the battery life is comparable is quite remarkable.

Many other reviewers of the iPad mini have been claiming that its really the iPad they always wanted. This despite championing in the interim that Steve Jobs’ claim that 9.7″ was the perfect size for a tablet, whilst other tablet manufacturers were settling on 7″. Trying to argue that the extra 0.9″ makes all the difference is perhaps a little puerile, when in fact its often the 4:3 ratio over 16:9 that is what really makes the difference.

Whilst things do feel a little smaller on the iPad mini, its not necessarily enough to compromise the experience when compared with the full iPad. I have noticed when web browsing that its necessary to zoom in more on pages to be able to read text normally optimised for desktop resolutions. The quicker web developers start adopting ‘responsive design’ techniques in their work, the less significant this need will be.

Overal the device feels snappier than the original iPad, the modest boost of the A5 processor over the A4 shows through, and particularly the extra RAM provided means that multi-tasking is less taxing and smoother to use. That alone was probably my only real gripe about the original iPad. I wish that Apple had never chosen to add multi-tasking to the original iPad as it compromised the experience too much. The only multi-tasking that was genuinely useful was the ability to download apps in the background, or to play music. App switching was generally not a great experience. But on the mini, app switching has so far very little noticeable delay, because the background app is generally still in memory.

The camera is a great, appears to be similar in quality (if not identical) to the iPhone 4’s camera. Strange that the lock screen doesn’t have the camera shortcut on it – the mini stands to be just as good as a camera substitute as the iPhone, so I don’t know why this feature remains buried, other than for the sake of consistency with the full iPad. But its not a big issue for me, as I always prefer to use Camera+ for photos due to the built in filters, and there is still no preference to specify which app is used.

I gave Siri a whirl, the first time I’ve really had a chance to play and it failed miserably. I tried the same speech into the recently updated Google Search app and it worked a charm, so its evident that Siri has a way to go. Siri’s app integration is going to trounce mere web search as and when it expands to the point of third-party app integration. For now, I can’t see the point of voice control, as its just too fallible. My typing is not far off as fast, and more accurate than the speech recognition, and there are so many times when you won’t want to use Siri for environmental reason that your still going to be typing searches at least 50% of the time.

So far, so good. I’m pleased with the purchase, and am enjoying the different form factor so far. Time will tell whether this is a better experience than the full iPad.