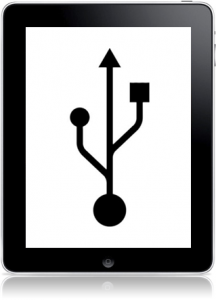 A slightly worrying phenomenon appears to have come across the iPad (v1) since upgrading to iOS 4.3.3. Â I normally rely on connecting the iPad daily to the Mac Pro to allow for sync and also to recharge the iPad, although it often not below 75% by the time I do this, even though I use it for several hours each day. Â I noticed last night that the charge was down to 30%, much lower than expected given that it had been connected all day.

I’m used to seeing the ‘Not Charging’ message in the top right of the iPad display when the display is on, as I’m aware of the issue of some USB ports not providing sufficient power to charge and use the iPad at the same time. Â However, as the iPad is usually plugged in at the desk for much of the day but with the display off, its quite normal for this to recharge the battery within an hour or two.

Since upgrading to 4.3.3 yesterday morning, I’m no seeing practically no progress with charging. Â It’s take 4 hours to get maybe another 20% of charge into it, and some of that was when I connected it to the Power Adapter as I started to investigate why the charging wasn’t going to plan. Â I’m assuming that Apple have made some sort of change to the recharging logic in this release that has impacted when it chooses to take charge from the power source if is below a certain level. Â Charge is going into the device, but only very slowly. Â Either that, or charging is going ahead as normal, but power consumption has increased for some reason – like location services turned on more of the time with no apparent app responsible. Â I’m going to reboot the iPad to see if any app might have been responsible. Â I do note that in the iTunes connected devices pane that even with the iPad display off, its showing battery status but not the charge indicator, which suggests to me that the iPad doesn’t even think its charging.

I’ve tried changing the USB port (previously connected via a powered USB hub) to the one of the front of the MacPro with no obvious improvement.

4 thoughts on “iPad Not Charging Well Via USB After Upgrading to iOS 4.3.3”