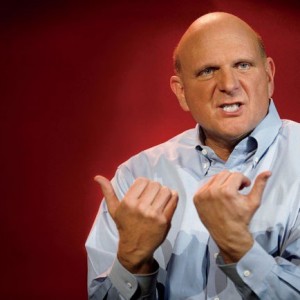 > Microsoft has announced that chief executive Steve Ballmer will retire within the next 12 months, once it has found a successor.
— [BBC News](http://www.bbc.co.uk/news/business-23815563)

Now here is some news that I think many have been clamouring for for many a year. Microsoft has never been the same since the departure of Bill Gates, and you might argue even for some time before that. Microsoft had a monopoly on the PC industry for a long time, and that as been squandered throughout the current millennium.

Its not necessary to point to an adversary like Apple and say how well they’ve done in recent years, but to point to everything that Microsoft has failed to do in the meantime. Missing out on the transformation of the phone industry was not an issue for Microsoft, but failing to see the transformative effects of the tablet industry, and specifically the iPad is so lamentable that Ballmer should have been push aside a long time ago.

Microsoft has been rudderless for a long time, and the recently announced by Ballmer strategy to become a devices and services business has just received the first nail in its coffin. Any incoming CEO is going to have their own opinion and strategy, so it seems bizarre to initiate a leadership change at this point. Wording from the memo suggests that it wasn’t part of Ballmer’s own strategy (‘leaving midway…’) so this looks like an ousting. Perhaps the new direction caused enough anger amongst the departmental thiefdoms that they all wanted a pound of flesh.

It’s also interesting to note the timing of the announcement. If you are bringing good news to the market, you announce early in the trading day to get early gains, if you are announcing bad news, you do it after hours, so that people have chance to vent and digest before exercising their options. This announcement came just before trading opens, so it suggests they predicted a positive reaction.

All of this smacks of floundering and flailing internally, the business being driven by the board and not its executive team or with the will of the troops on the ground. You’d have to hand it to the person whose going to step into those CEO shoes, its going to be one hell of a task. But if Microsoft wants its crown back, it’s going to have to carve out a grand vision for the future and give us compelling reasons to want to go along for the ride.