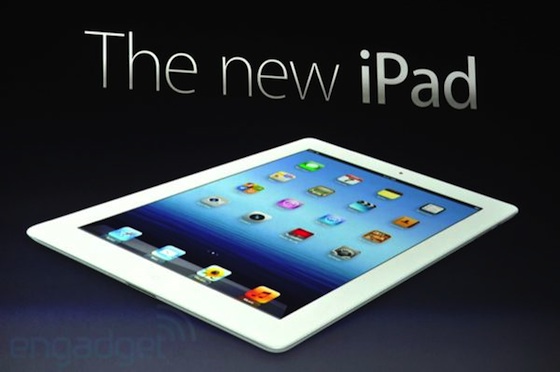 Ok, so Apple’s latest media event has revealed the iPad 3 and and update Apple TV box (not a TV set, or anything revolutionary, as had been hoped for by many).

The iPad gets the expected upgrades:

* High resolution ‘retina’ display so everything onscreen looks more gorgeous (allegedly)
* Camera upgrade to 5MP so you can take respectable photos
* 4G LTE mobile broadband for those served by it (not sure about the UK)
* Faster CPU and Quad-core Graphics which should speed things up a bit, particularly for gaming
* Slightly thicker and heavier than iPad 2 but similar to iPad 1
* iPad 2 remains on sale in 16GB variant as a low cost entry point, otherwise pricing remains the same
* Dropping the ‘3’ from the name, just going to be called the iPad (or the ‘New iPad’). Same will happen with the iPhone next time around
* Updates to many of the Apple apps to support the Retina display
* New iPhoto for iPad and iPhone available today, adds new browsing, search and editing functions
* Photo Beaming – directly transfer photos between devices
* Voice dictation. Not full Siri as had been touted, but just the ability to enter text, anywhere that the keyboard would allow, via voice.

So nothing that you might call truly innovative, but a decent refresh. It’s probably not sufficiently different for me to justify upgrading, I’ll need to wait and see how it feels in the hand once they hit the shops.

The one feature that I most value is actually the photo beaming, which hopefully is just a iOS 5.1 feature and not dependant on the new hardware. For the last 4 months of travel, I’ve been doing all the blogging via the iPhone for the sole reason that that is where the photos are stored, and not having reliable enough connections to allow iCloud to do it stuff. Now I should be all to beam the images to the iPad, and blog from there with a more spacious keyboard!

The voice dictation might be an interesting addition, again assuming its available on earlier models, as it might help to overcome the limitations of the keyboard in certain situations.

There will be no doubt more detail coming in the next few hours as people manage to dissect the announcements and read through the documentation on Apple’s website, particularly if there are any restrictions on some of those new features for earlier models or the iPhone.