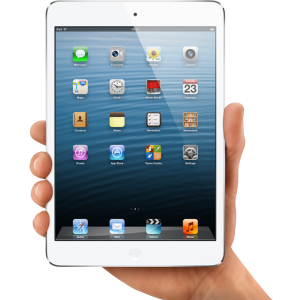 On Tuesday, Apple announced a slew of upgrades to their product lines, with new Macbook Pros, iMacs and Mac Minis, and the first major deviation to the iPad since its launch in 2010, in the form of the iPad Mini.

The iPad 3rd Generation also got an upgrade to become iPad 4th Generation (although known generally as the ‘iPad with Retina Display’). It got the same Apple A6X processor that debuted in the iPhone 5 in June, plus wider LTE mobile broadband support. The CPU boost will be welcome for those interesting in more power hungry apps such as games, and will no doubt make things feel a little more snappy all around.

The iPad mini is significant in that Apple have decided to produce a more compact version of the iPad. This is no great surprise, when you think that the same happened with the iPod line (iPod mini, iPod Nano), but in the case of the iPad mini, they haven’t cut out any of the features or power, just reduced the size of the display. You get the same performance that you would experience on the iPad 2nd and 4rd generations.

It’s worth looking at what Apple have changed in each release of the iPad to put this into context.

* iPad 1st generation was based on the Apple A4 processor. Unfortunately Apple have decided against providing support for the latest iOS 6 release on this system, which is largely down to the lack of RAM at only 256MB.

* iPad 2nd generation was based on the Apple A5 processor, which gave about a 50% increase in performance of the A4. The RAM as also increased to 512mb which made multi-tasking and more memory hungry apps viable.

* iPad 3rd generation was based on the Apple A5X processor and gained the higher resolution Retina display. The ‘X’ designation on the processor indicates that only the graphic processing unit (GPU) got a speed bump, and this was principally to provide support for the additional pixels on the Retina display. Overall, performance was comparable to the 2nd generation.

The iPad mini then fits into the mix as per the iPad 2nd generation, so you are not compromising on performance compared to anything else you might be used to already. Obviously keeping the price down and battery life up meant at this time it was not possible to opt for the A6X performance.

I’ve had an iPad since its release in June 2010 (UK) and think its an amazing device. I didn’t really know quite how significant it would become as a computing platform in those days, but now find myself using it for the majority of my computer time during the day. I tend to only resort to the Macbook when I need an app that is not available on the iPad, such as for web development or image processing. At the moment that happens to be rare due to the fact I’m not gainfully employed in computer work, spending most of my time doing house renovations.

Apple’s decision to drop support for iOS 6 means that the iPad 1st generation will gradually become less viable. Already as websites become more demanding with higher resolution images and embedded video, I see Safari on the iPad crashing more frequently which will be down to memory constraints. It’s a shame that Apple won’t be doing anything to handle this better, but the iPad 1 only sold a couple of million units before the introduction of the iPad 2, and with over 100 million iPads now in circulation, its rapidly become an edge case. Plenty of those early adopters are gnashing their teeth and crying foul, but Apple have always relentlessly pursued the best technology for tomorrow with less regard for what was relevant yesterday.

The iPad 1 will continue to function of course, but there is a caveat. Because of the rapid adoption rate of new iOS releases, App developers often quickly provide updates that demand the most recent iOS versions to support certain added features. This means that older iOS users don’t get the benefit of bug fixes and other minor improvements, as the App store has no mechanism to provide multiple version upgrades.

There is also a significant risk if you ever need to restore your iPad and you are using iCloud for backing up the device. Apps that have been updated with a later iOS version requirement cannot be restored to your device, which potentially means any iCloud stored data for those apps could be locked into iCloud with no way of getting it out. You may then be force to by a later iOS device just to get at data. I think this is a slight unintended consequence as far as Apple is concerned, but one to note from a data security standpoint.

All this means that I’m quite keen to try the iPad mini. It gives the same benefits in terms of performance and feature improvements as the full sized iPads, but at a much keener price point. I’m even going as far as only ordering the 16GB Wifi model, as this in practice fits in well with how I tend to use the existing iPad the majority of the time. I can use the iPhone to provide tethering when I need mobile data, so no real downside there. I will loose access to the GPS on the device, but I tend to only use maps when I don’t have a mobile signal on the iPhone, and I can get around that by just having another SIM card to hand. Slightly less convenient, but with the Â£100 premium on the 3G/LTE models, I think this could work well.

The mini could also work out well in terms of form factor. I use the existing iPad a lot of the time in bed, and its additional size and heft makes it slightly uncomfortable to hold. Something half the weight and small enough to hold one handed could be a significant improvement. Mel is also on the lookout for an e-reader and email client away from the desktop PC, and so this could work well for her too, and we can always chop and change between devices depending on needs. The only downside is that there is no user switching on iOS devices, which means it could be tricky sharing devices from an email perspective. We’ll have to see how that works out.