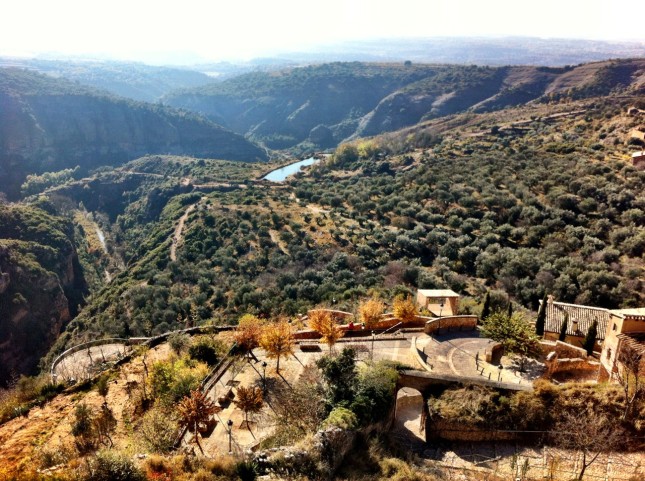 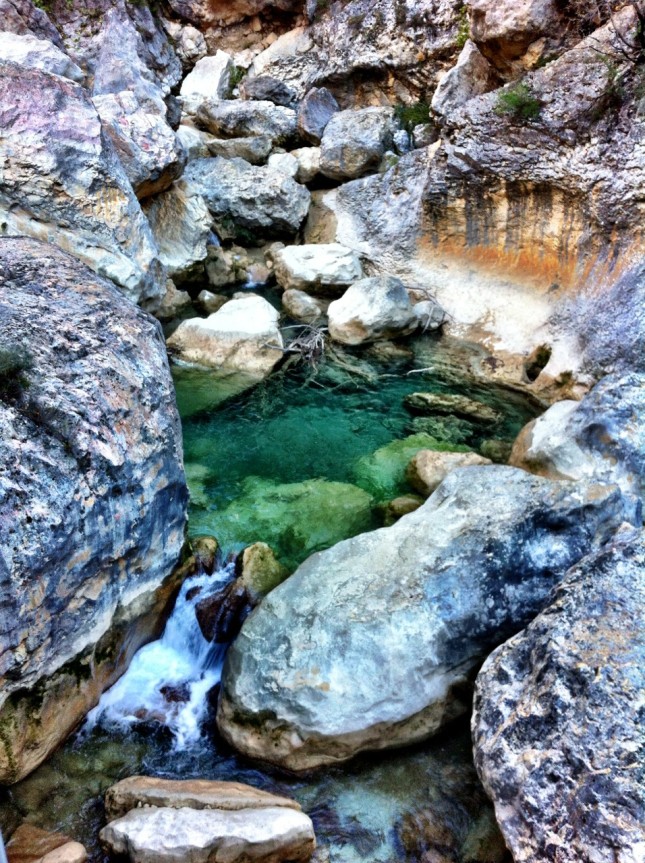 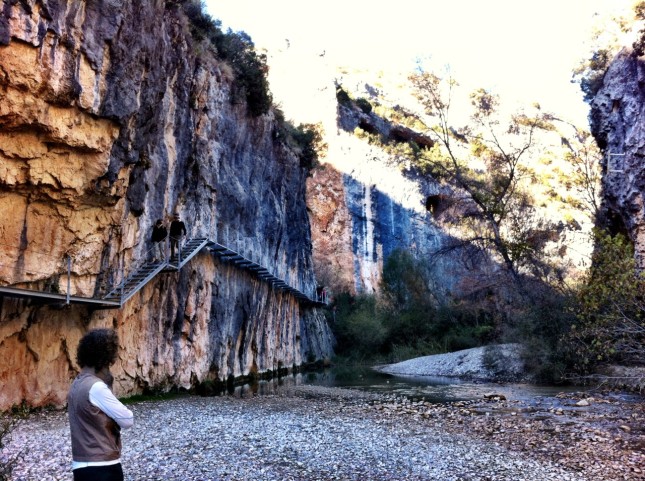 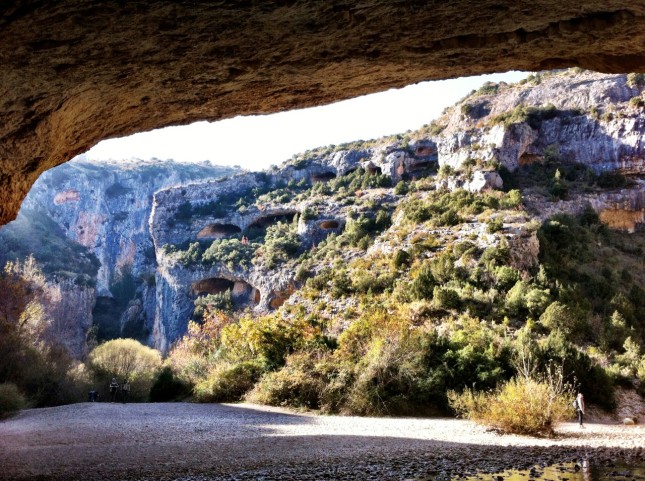 Our last day in the Guara, and we relocated to the south-west corner and the town of Alquezar. Itâ€™s claim to fame is the canyon that runs around the eastern edge of the town, not only a nice walk should you wish, but you can don a wetsuit, crash helmet, and throw yourself in and plop around through the rocks. Doesnâ€™t seem all that appealing at this time of the year and no-one having a go, instead enjoying the sunshine and lurking around the bars and restaurants in the town in a somewhat cosmopolitan manner. This was a place for families, not adventurers (the North Face gear was absent, replaced by Sunday best).

We wandered through the back streets of the town – its quite photogenic if you have a helicopter (one of the reason I singled it out as a place to go), but if you have two feet on the ground you canâ€™t really get a good angle on it to do it justice. So youâ€™ll have to settle for a view from the Monastery down the valley, and of the lovely canyons (and the lovely Melanie, included for scale).

As we appeared to have chewed through a lot of LPG whilst wild-camping in Rodellar, we decided that we might as well backtrack to Huesca before heading into the mountains, which is an LPG station free zone. The Sat Nav took us on a bit of a merry dance around the town, partly because it wanted to take us down a pedestrianised street so we veered off and then it decided going around the town was better than going through it, although Iâ€™d agree because the heart of the town is a hill and narrow streets.

LPG refill was less complicated than last time, and it illustrated to use once again that you canâ€™t rely the gauge on the LPG tanks for an accurate reading when you are at altitude. For some reason it gets all pessimistic and showing empty when in fact you have half a tank left. Hopefully though, weâ€™ll be able to spend more time in the mountains before having to look for LPG. And that will probably mean a crossing to France where LPG availability is more like cockroaches than rocking horse shite.

What did turn out to be more bizarre was a trip to the supermarket. We parked up and on attempting to lock the doors the alarm wouldnâ€™t respond to the fob, and neither would the main door key fob (there are separate alarm and door fobs as the alarm was after market). Mel went off to the shops whilst I investigated. Nothing would respond, but I could see both fobs had power as the lights on the fob both showed. I tried the dashboard mounted lock switch, and that also failed to respond, so I assumed a blown fuse. I replaced the appropriate fuse, and then the manual switch worked but the fobs still didnâ€™t. On inspecting the old fuse, it appear intact so I switched back again and still the manual switch worked by the fobs not.

I got the spare keys and they didnâ€™t work either, although the spare alarm fob didnâ€™t have a battery, and switching that didnâ€™t yield any different result. At that point I started to suspect foul play. The engine was starting OK, so at least the immobiliser wasnâ€™t cutting in. I hunted through the paperwork for the alarm manual only to find it missing (weâ€™d decided to leave it behind as a security precaution). I started looking around the car park for suspect looking individuals in case someone had a jammer or skimmer for the fobs, and was either dipping peoples cars when they went shopping not realising their central locking/alarm wasnâ€™t working. Indeed, there was a chap a couple of cars away with the bonnet up but not paying any attention to his engine, but eating peanuts instead. Its quite possible he had broken down and was waiting for a friend, but he was the only one looking out of place, a part from a van parked nearby with blacked out windows. So anyway, I gave up on a fix, resolving to try again when we were plenty of distance away.

In the process of putting the manuals away, the chap with the bonnet up disappeared, so maybe this was on the shadier side and I was right to be cautious. Whilst contemplating this I tried the fobs again, and suddenly the alarm went off, and was successfully disarmed by the fob. Still they didnâ€™t work to lock the doors, but I wait for Mel to return and then we set off for the Pyrenees. And sods law, on arriving at the campsite and trying the fobs, all was well once more. Peculiar, and I must admit that either there was something in the area of the carpark interfering with the radio frequency, or someone with a jammer, or just one of those things. All back to normal now though.