A 16 mile ridge walk through some lovely countryside in the Peak District. The first picture encompasses the route – out along the ridge which loops around across the top of the picture, back down the brown hill on the far right to Edale, and then back across the valley, and over the ridge into Castleton.

The ridge from Lose Hill to Jacob's Ladder

Up and raring to go this morning, the first task of the day was to track down a full English. That proved to be a little harder than expected. Despite all of the pubs in town prominently promoting their full English breakfasts, it was frustrating trying to find one that might actually serve us.

We went first into the Peak Hotel. The bar was deserted, which it said was where the ‘walk in breakfast’ was served, and eventually I noticed that there were people in the dining room having breakfast, so tried to go in there, except the door was locked. A lady came and opened the door, who I thought worked there, but she was just one of the residents. I could hear noise in the kitchen so called through, and a chap came out. When I asked about breakfast he said we needed to go into the bar, and that there would be quite a delay. When I asked how long, he just said the residents needed to be served first. There was one table of four. Never mind we said, and set off up the road.

I forget the name of the next pub, again advertising breakfast, but the door was locked. I knock and we were let in, and after a little bit of a kerfuffle, did actually get served. Coffee, a latte, which tasted pretty dire, and the ‘Derbyshire Breakfast’ was indistinguishable from any other English breakfast, but at £5 what can you expect.

By 9:30 we are on the road out of town and the slow climb up to Lose Hill. The last stretch is not such a slow climb, but you are rewarded with a 360 degree panorama of the Hope Valley, and the ridge snaking away from you into the distance. Atop Lose Hill is one of those metal disks showing points of interest, which helps get the bearings. I’ve been trying to think of the name of these things since seeing one on Win Green in Dorset. There is another couple enjoying the view, so I ask them and they are non the wiser. I’ve subsequently Googled it, and there are called ‘Toposcopes’ or ‘Topographs’, which to be honest, doesn’t seem to fit, but there you have it.

The walk along the top of the ridge is great. The sun is strong but tempered with light cloud, so we are not roasted in the process. We pass Back Tor and reach Hollins Cross which is temporary home to a group of kids, basking like Sea Lions, and the ‘responsible adult’ looks like he’s suffering from high blood pressure, caused either by the ascent or the effort of herding kids up hill.

A drag up to Mam Tor, there are a few people we pass on the way, but a gaggle on top of the Tor, but the views are great, particularly the view down to Edale. From here, everything looks in miniature, helped in part by the trains on the railway disappearing into the Cowburn Tunnel on the journey between Sheffield and Manchester. It’s like something from a model railway exhibition. 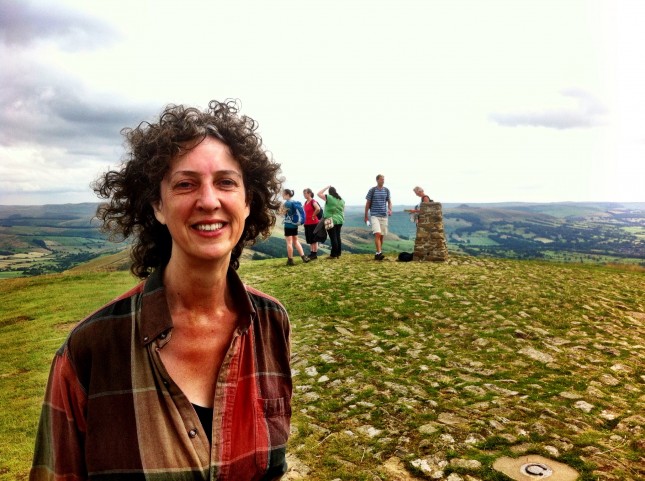 We descend from Mam Tor and cross the road, then start the ascent to Lord’s Seat. The ridge softens at this point, broadening out, and the limestone disappears beneath a swathe of peat. We reach a point where a well worn track sets off north (marked Colborne on the OS map) that sets us on course for the top of Brown Knoll. The peat is surprisingly springy underfoot, like trying to walk on a foam mat. The ground is rutted from walkers and from run off, and a little squishy in places, but all quite navigable largely in part to the extended dry spell. In winter, this must be foul. We pass an elderly couple who are picking out the drier patches, they must be well into their seventies if not more but seem quite happy. We stop for a photo at the trig point and they march on past, slow but sure, and head on up towards Kinder Scout. 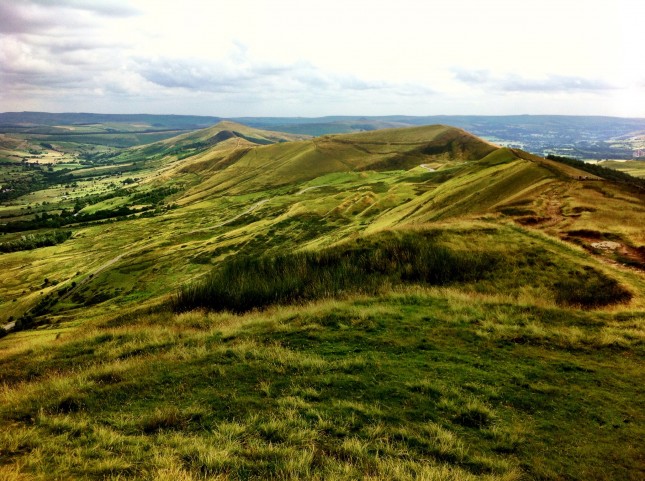 From Lord's Seat, looking back towards Lose Hill

We decide against trying to make it to the highest point of the Peak’s today, saving it for another time, and sit at the top of Jacob’s Ladder for a brew up and a rest. I’ve got a little foot discomfort by now, and on stripping of the boots and socks discover small blisters on my heels. Annoying, as these boots and socks have been impeccably comfortable in the last 8 months that I’ve owned them. On closer inspection of the socks I discover knots of fluff around the heels, and these have created harder patches to rub against the skin. Better socks required me thinks. I pick off the worst of it and we carry on.

For some reason I thought Jacob’s Ladder was some apocryphal point on the Pennine Way, but its well shod with crazy paving, and whilst quite steep, not the worst thing you could be expected to climb, or descend. I think what makes it stick for those that walk the Way is this. It’s on the first day if you are starting the Pennine Way from Edale, and the last if travelling in the opposite direction. So it’s tough if you are just setting out, and then you have the bleak moors of the high Peaks to rub it in. If travelling south, then you’ve just suffered the moors, and the view down to Edale and the descent of the Ladder most come as blessed relief. Either way, something that’s going to leave its mark on your memory. 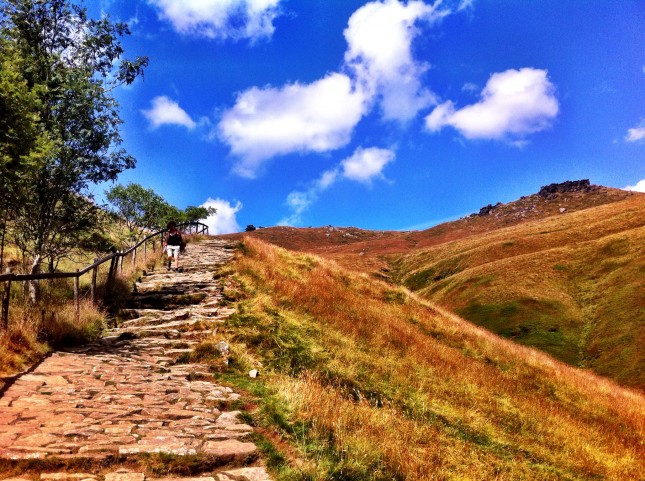 The descent of Jacob's Ladder

The sun comes strong during our descent and as we traverse the edge of the valley to Edale. We stumble into Ye Olde Nags Head grateful that they are doing food all day, and enjoy a light lunch and a pint. The Nags is the official starting point (and therefore the end) of the Pennine Way, although they make nothing of the latter, which I would have thought would be much more cause for celebration. It’s also an odd choice for a start/end to such a fabled walk (largely because its England’s longest long distance path). If I was on the planning committee, I would have definitely included the ridge to Lose Hill because it would make a great first or last day. But then that might bugger up the daily distances and stops, so who knows. 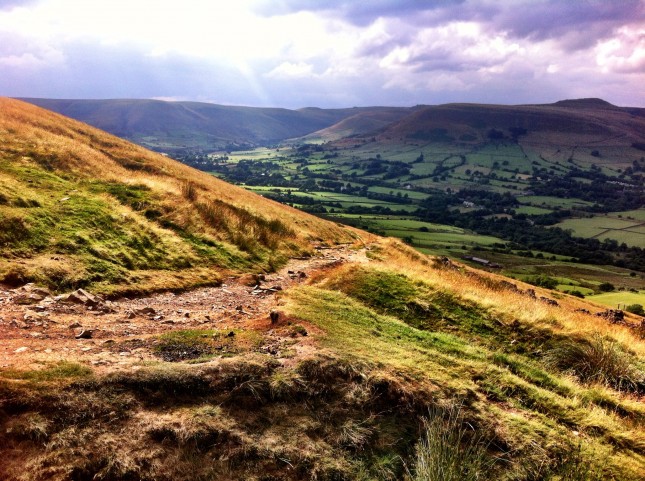 From Hollins Cross looking back to Edale and Jacob's Ladder

After our late lunch, all we have to do is walk the three or so miles back to Castleton, but there is that ridge in the way, and we drag ourselves up in the hot and humid late afternoon sun to Hellins Cross. Foregoing a celebratory drink in one of Castletons hostelries, we head back to the camp site, have a nice cup of tea, and then take advantage of the site showers for a long and well deserved scrub clean.

Sleep is long, deep and restful.