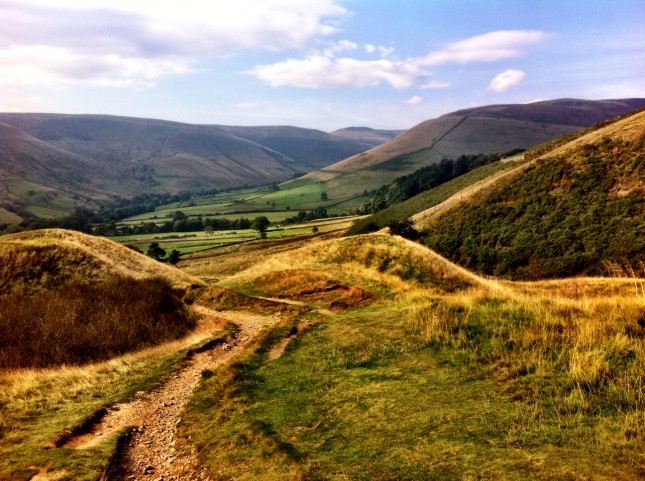 Another day of walking by myself (which I actually quite enjoy) and after a very lazy morning I decided that it was about time to get out and do something with the day. The morning mist was slowly burning off to reveal another gorgeous day in paradise.

I’d sized up several options for the day, but decided in the end that it was time to tackle the unfinished business from the last trip to the Peaks, and go a take a look at what Kinder Scout has to offer the walker.

First job was to move the van from the campsite at Aston and go around the bend into the Vale of Edale. By the time I’d filled up with water and got there it was lunchtime, so I prepared sandwiches for the journey and had one for immediate consumption. I’d parked at the station parking so a walk through the village was necessary to get to the start of the Pennine Way. I skipped the pub which is the official start, and began to retrace our steps from a couple of months ago, but this time in reverse, heading for Barber Booth and the first rung of Jacob’s Ladder. 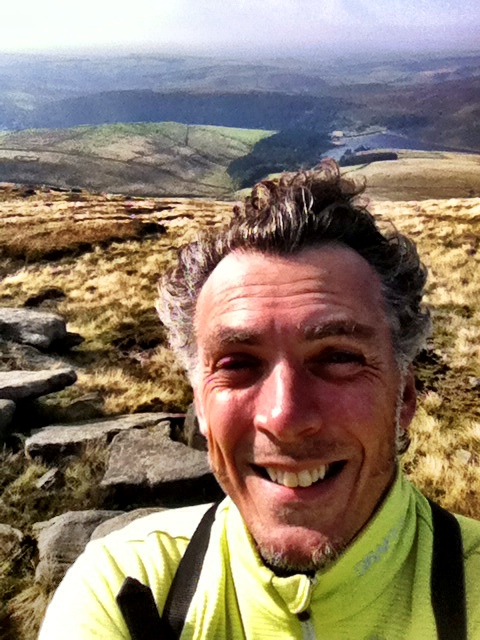 Today I shall mostly be trying new hairstyles

I had such a spring in my step this fine day that I felt I should think about fell running. I was overtaking the mountain bikers trying to peddle uphill and felt so good that as I got onto the ladder proper I broke into a run. It felt good at first, but it wasn’t long before my heart popped out my chest, slapped me round the face with a wet haddock and reminded me that at this age, fell running is probably off the agenda.

I kept plugging uphill whilst trying to cram my still beating heart back in my chest, wondering why everyone else seemed to be going downhill. You ain’t done Jacobs Ladder until you’ve gone up it, I kept telling myself.

At last, I reached the summit, and headed off for Kinder Low, except after a few minutes of being distracted by the fine views that I realised I was heading for Edale Head and so had to do a quick shufty to get back on track. 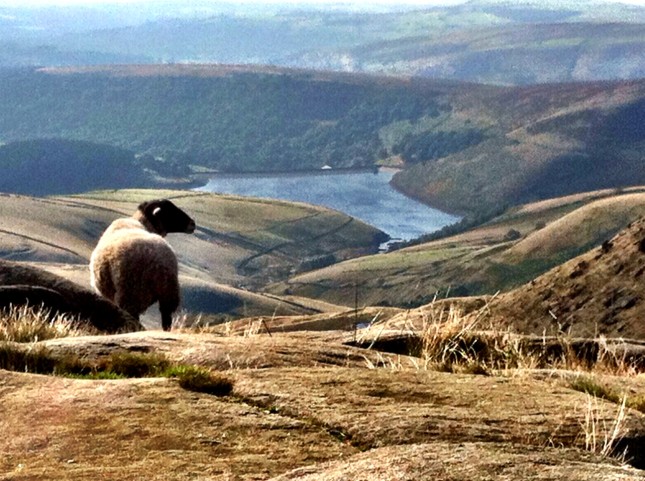 Pissed off sheep on the edge of Kinder Downfall, looking towards Kinder Reservoir

Whilst still lightheaded from the earlier exertions, Kinder Low came as a surprise – I though I’d wandered onto the beach. The sand underfoot, the driving wind, people gripping jackets and hoods close seemed all reminiscent of the seaside on less benign years than this. I managed to find a large rock on the western side to get out of the wind and sit, enjoying my sandwiches and the view of Manchester. Once suitably refreshed, I set off for Kinder Scout which was a bit of a disappointment but interesting in its own way, and then off to Kinder Downfall, an edge of the world waterfall but only piddle after a dry summer, the only entertainment being a flock of Japanese tourists trying to chase a couple of sheep off the edge in an attempt to get the obligatory 300 photos. I managed to get a few pictures of the sheep without terrorising either the sheep or the Japanese. 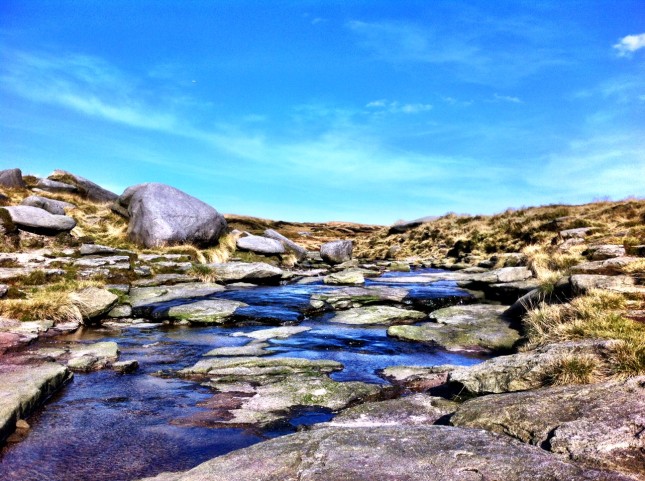 The stream that feeds Kinder Downfall, rather dry this year

The route then took me back south east towards Edale, or that was the theory, but after following the stream that creates the downfall for a bit, it starts to turn into peat bog and the path is no more. No sign whatsoever of a path, just a mile of bog that stretches to the horizon with no discernible features. It would be fabulously easy to get lost up here, even on a sunny day with a GPS at hand it was ridiculously easy to go around in circles trying to avoid the treacly stuff. Fortunately there were other lemmings around all equally disorientated and laughing jeopardy in the face.

At one point I tried to jump a ditch, made it to the what looked like firm ground on the other side, only to end up planted to the kneecap. Fortunately it was easy to extracate, but a word to the wise, keep your feet apart when bog jumping so that your crutch acts as a brake, or you might end up on a journey to the centre of the earth.

Finally I made it to the edge and the view down over the Vale. Now a simple walk around the edge of Edale Head, then out onto Grindslow Knoll for the rewarding view of the Vale and the village below, and then a quick bit knee jarring descent back to the van. 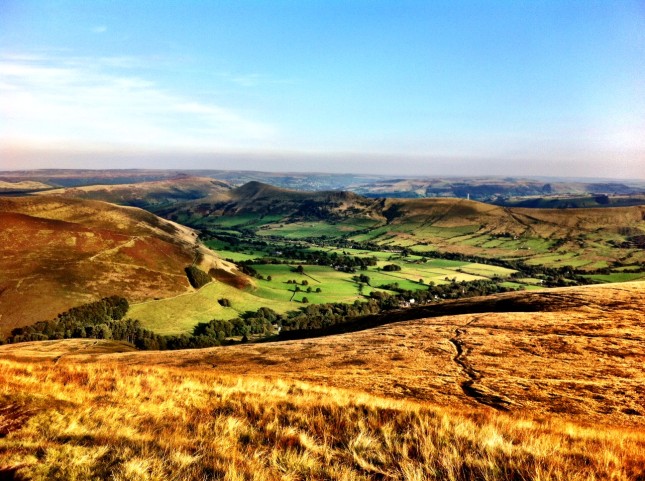 The Vale of Edale as seen from Grinslow Knoll

A proper decent day out, even if all done in the course of the afternoon. In order to rendezvous with Mel I took a trip along the Snake Pass towards Glossop, and then a windy route to Marple to find the house of friends of Jim’s to which we had been invited to dinner. Job done, wine in hand, pythonesque meal of gargantuan proportions consumed, and a very sound sleep was guaranteed.