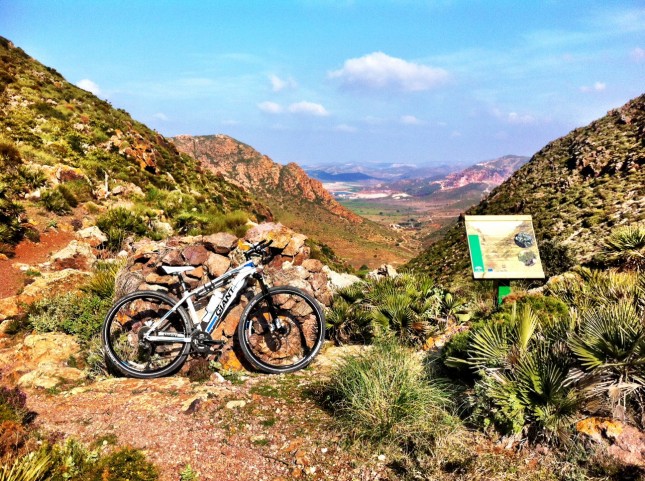 Cerro Cuchillo, a pretty valley in the Cabo de Gata

My chosen descent is proving to be very rocky, meaning that I’m having to walk quite a bit of it. It’s only a footpath, not a cycle track so to be expected. It’s a very beautiful valley, a deep gorge on the upper sections just off to the right of the path, then opening out more as I move down.

The bike is propped against a stone ‘bunker’ which I again presume is used for hunting. They appear here and there on the hills. I would imagine that game is flushed towards the bunker where the guns sits in wait. Whether these are designed to provide shelter or protection for the guns is unclear. If it is for boar hunting, then you might well want some protection from the beast charging towards you!

Whilst I’ve doubted whether the hunting is actually for boar, and I can’t find any references elsewhere on the internet ([some documents acknowledge that hunting does take place](http://www.cabodegata.net/esecotdeen.html) even though there are proposals to ban it in the interests of nature preservation) to it as a specific activity, the further I got into the ride the more I became aware of ‘rooting’ spots. At first I thought that these were maybe from goats or sheep, but when I got around the back side of the gold mining area at Rodalquilar, there were quite extensive patches that had been rooted through. I was half expecting to come face to face with a wild boar, and was wonder how I should react. Run, get out of the way, charge?

I found this video on Youtube which shows a hunters close quarters contact with a boar – I can’t tell if this is Spain or elsewhere, but gives you an idea of the foe!

And also this one, which shows something of the hunt, this time in the Spanish Pyrenees. Sorry if you are an animal lover and against hunting!

The info board is written is Spanish and appears only to be highlighting some of the local flora.