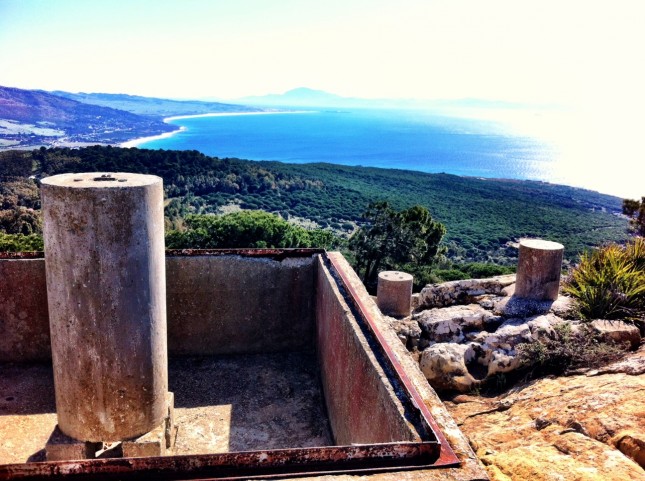 After what seems like an age, it was time to get back on the bike for a bit of a romp on the hills. The plan was to cycle up into the ridge of hills behind the campsite, known as Sierra de Fates, which has a line of a dozen or so wind turbines on top. Looking at the satellite images, I could see a good track that zigzagged up the hills and followed the line of the turbines, and it started only a few hundred metres up the road from the campsite. Unfortunately when I got there, it was marked as no entry, although that may have only been due to a house that appeared to be along the track, or to discourage motorists. I decided to play it safe and go further along the road to try and find an alternative. Annoyingly, all of the tracks appeared to be marked as private.

I reached a turn on the opposite side of the road that climbed up towards Paloma Alta and another interesting rocky peak, and I could see a car working its way up the road. Again, this road was also marked as no entry, this time saying it was a ‘zona militar’, although the sign looked pretty dilapidated. I decided that if the car could go, so could I! This was fine but after climbing a few hundred metres the road was gated and indeed there was some sort of compound, but it all looked abandoned. But I could go no further. As I turned to descend, I found a foot path off to the side and started to work my way up this, although before long I had to dismount as the surface became too rough to cycle. Eventually a came out onto a crest with some sort of old trig point. I couldn’t work out why there appeared to be about six different trig posts here, like they had to keep redoing them for some reason. A nice view across the Bay of Trafalgar and north along the coast towards Cadiz. From here I was not going to be able to go any higher with the bike as the way was just too rocky, so I turned and started the descent.

About half way down there was a road signed posted to Betis, so I took this, and this gave a nice gently rolling ride along the edge of the valley looking across to the Sierra de Fates, passing by farms and horses milling about in the road. No one seems to bother with fences for the animals around here, just the odd cattle grid to stop them wandering too far.

Eventually I picked up a track that continued as the road had, but this came to a dead end and a bunch of snarling dogs. They were all keeping their distance, although as I turned to go one decided it would put on a show and came closer, snarling and bearing its teeth, but that was as brave as it wanted to be. So back along the track to the road and then I dropped down to the main road to see if I could find another way up into the Sierra de Fates. 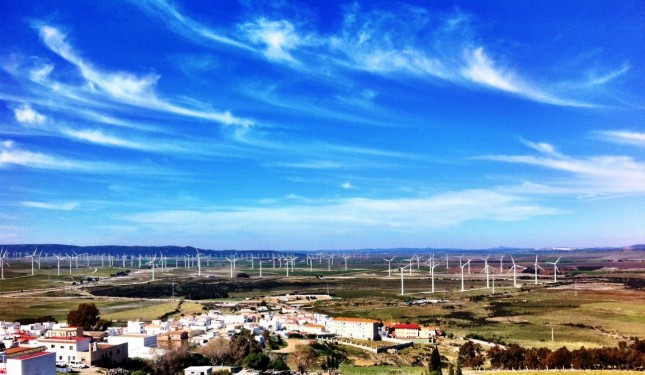 One of Europe's largest wind farms, near Tarifa

Although I could see some tracks going onto the hill from here, they appeared not to get high into the hills due to some rocky cliffs. I decided to head for the village of Facinas as this appeared like it might provide access via the gentle nose of the ridge and I figured this might get me up on top. As I approached the village the valley opened out and all I could see were wind turbines stretching out across the broard plain ahead. Hundreds of wind turbines. I checked later when I got back and this is apparently one of the largest wind farms in Europe.

Through Facinas and I found a road, then a track that lead up the hill but again I was foiled as that was gated off again, and two separate tracks that I explored were blocked. Time for a bite to eat and take in the view whilst I considered what to do next.

All there was to do was head down into the valley and pick up the road that led between Sierra de Fates and the next ridge of hills, Sierra del NiÃ±o. Worst case the road would get me back to the coast approaching Tarifa.

As I followed the track back to Facinas, I found another track doubling back that looked like it might lead me around the edge of the hills. It did for a short distance, then after a couple of houses it petered out into a field with nothing but cattle tracks. There being no fences or signs about private property I carried on as I could see I could drop down the hill to a track that led to the road. I had to walk some of it as the hill got too rocky, then passed by some cows that eyed me suspiciously and a horse that seemed quite taken aback to see me. Eventually I picked up the track and at one point stopped at a junction to see which way to go – left to the road or right along another track that wound through the hills. Here I was approached by four inquisitive ponies, who came to see what I was doing. They were young and came close for a sniff and a stroke but bored easily and started to get a bit frisky so I had to shoo them away before they tried jumping on me. As time was getting on and I had no faith that the track would lead to anything other than a dead end I opted for the road.

I followed the road for a couple of miles through the valley. I could see the Embalse de AlmodÃ³var (reservoir) off to one side and more wind turbines. It’s much more green and lush around here than just about any other part of Spain we’ve seen which must be down to the fact it gets more rain and generally cooler weather from the Atlantic. It was very pretty, and reminded me of Wales for some reason. 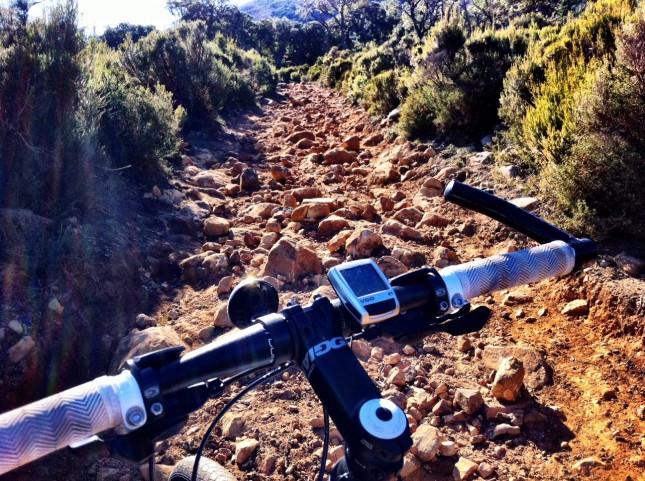 There was a footpath signed off to the right, and checking the map I could see that this skirted the edge of the hills. It was marked as 4.5 hours to Tarifa, so I figured only 3 to the coast by foot, and should therefore be no more than 2 by bike, which was doable. The path started on a good gravel road so the first mile was quick, but it quickly disintegrated into a rubble strewn cutting where a small steam ran. I walked for a bit and finally picked up a track again that bobbed up and down following the 200m contour line. Alas this then plunged into a boggy hollow, the whole area surrounded by bushes with two inch thorns, so I had to spend 10 minutes figuring out if I could avoid wading through the mud. In the end I managed to pick my way along the edge over boulders, trying not to drop the bike in the gloop, and got to the other side with only muddy wheels and a few minor flesh wounds from the thorns.

The track improved again and progress was finally being made, a lovely view across to the Sierra del NiÃ±o hills and down to the coast, with the Rif Mountains of North Africa providing the backdrop. Finally I reached a road and enjoyed a nice romp towards the coast.

As I rounded a bend past some houses I heard a yell and looked over to see a man walking out of his house with what looked like a car exhaust pipe held over his head. He didn’t seem to be addressing me, which was good as on closer inspecting I realised the exhaust pipe was in fact a rifle! I don’t think he was completely in charge of all his marbles and didn’t look that competent with a gun as he waved it about above his head with no particular purpose unless he was trying to swat flies that I could not see from 50 metres away. I had momentum on my side and decided that increasing distance was my best ploy to avoid any unintentional or even intentional discharge of the weapon in my direction. 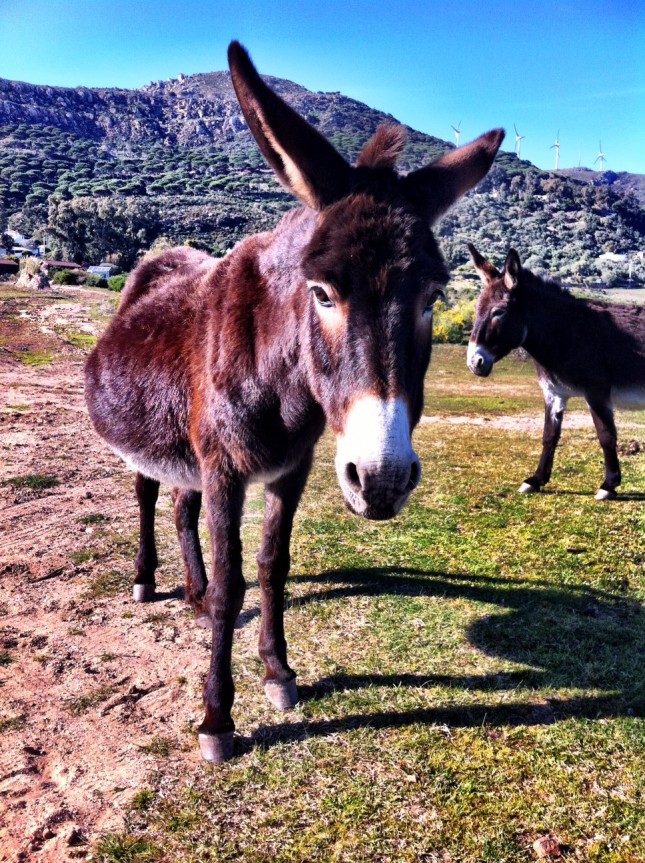 Donkeys near Tarifa - the 'Jack' was a very 'talented' chap, which probably explains why this one appears pregnant

I stopped to say hello to some donkeys including a ‘jack’ who seemed to have personally coined the phrase ‘hung like a donkey’. I thought it was a new breed of five legged donkey at first. Alas he was rather camera shy so I can’t show you just how ‘talented’ this ‘jack’ was, although I think his name probably should have been ‘Jake’.

Only another couple of miles and I was back at the campsite for a well earned rest in the sunshine after 30 miles of decidedly rough stuff. Perfect days!