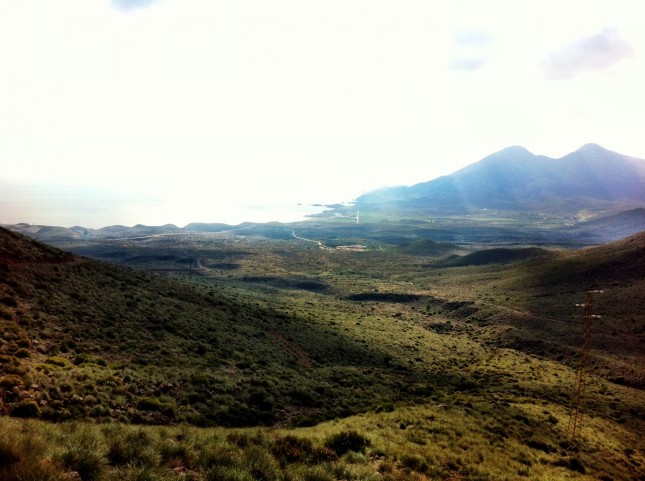 This hill is proving to be more effort than anticipated. Perhaps too much red wine at the camp restaurant last night? Its a pull all the way, and in places the grit is just a little bit too loose for the road tyres I’ve got fitted on the Giant Talon 29er. So, I’m walking some of it, and cycling what I can.

The image is the view from about the halfway point up the access track that goes up to the Meteorological Station and a couple of communications masts perch up on top. It also access a small selection of abandon houses on La Rellana.

Nice view and the Med is flat calm, as has been the case nearly all the time we’ve been in Spain.

[Los Escallos](http://www.degata.com/eng/html/pueblos/escullos.htm) is a small fishing and tourist community. There is a small bay, and walks along the cliffs and fossilised dunes. The latter create fascinating formations and jetties that hang precipitously over the sea. The most impressive are the [Fossilised Oolitic Dunes](http://geology.utah.gov/utahgeo/rockmineral/collecting/oolitic.htm), formed about 100,000 years ago, which reveal air holes and folds like you might see in coral or lava, and lie in a band about 4 metres thick over softer sediment, which is eroded by the sea faster than the fossilised dune, creating precipitous jetties and slabs breaking off into the sea like [calving icebergs](http://en.wikipedia.org/wiki/Ice_calving).

There are the ruins of the Castelle de San Felipe on the shore, what would have once been a serious defensive structure. Mainly the fortifications remain, the buildings have mostly crumbled. One of the info boards nearby has a photograph (dated from about 10 years ago) of the bay still showing one of the main towers remaining, but now it is just a pile of rubble. It looks like they deliberately demolished the building, perhaps because it was unsafe and beyond repair.

In the background of the image are the twin peaks of the Cerro de Los Frailes, two volcano’s created millions of years ago and rising to a current height of 493 metres. There is an interesting [panoramic photo taken from the top of Los Frailes](http://www.degata.com/eng/html/panorama/cerrofraile.htm) and looking down across the same piece of terrain captured in my image.