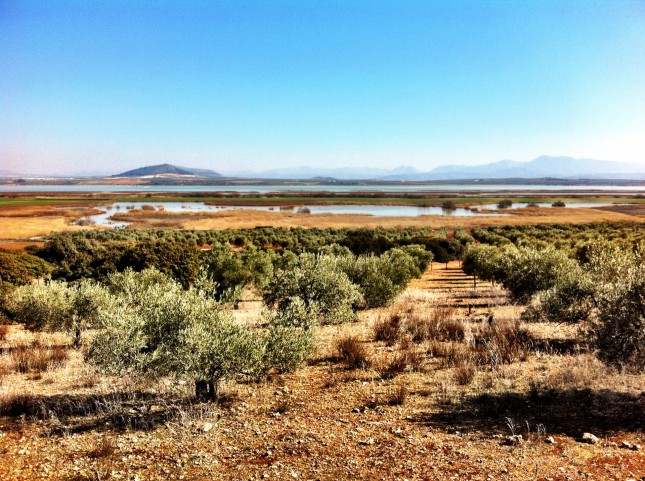 We weren’t expecting the Spanish Inquisition – sorry, I meant to say cold. For some reason, despite having left the mountains, last night was a rather cold one. The neighbours said they measured -3 degrees, but we had the electric heater running all night and by morning it was feeling pretty darn cold. I don’t think we left a door open, but it felt like it!

We were in two minds what to do today. There was a possibility to visit the [El Chorro Gorge](http://en.wikipedia.org/wiki/El_Chorro), where there is a narrow footpath and concrete footbridge that spans the gorge, but on further investigation it sounds like its dangerous and closed for renovation for the next couple of years. There was also the possibility of going a little further a field and attempt to find a hotel, as we thought a change of scene for Mel’s birthday might be a nice idea.

During a chat with the English neighbours, they mentioned that the nearby lake had Flamingoes on it, and so we decided that we might as well stay put, get the bikes out, and enjoy an afternoon of peddling and twitching. The lake was a couple of miles from [Humilladero](http://www.humilladero.es/es/index.html) where our campsite lies, on gravel roads between Olive groves. There was an unexpected detour to get through a tunnel under a railway line, which looks pretty new, and not marked on my maps. As we drove in past Antequera yesterday there was a massive viaduct being constructed across the valley floor, so there is no shortage of money being spent on Spain’s economic development.

[Las Lagunas de Campillos](http://www.campillos.es/pagina.asp?cod=491) is a 80 hectare lake and home to many species of wildfowl, within a protection zone of 1000 hectares, mostly planted with Olive groves. There were several species of brightly coloured ducks that we spooked into the air as we approached a boardwalk across some of the marshy areas around the edge, and we could see some Flamingoes, but too far out to be more than pin pricks to the eye. Whilst enjoying a lunch brake half way round, we were able to watch few couple lazily fly across the lake, just inches from the surface.

There isn’t a cycle path around the complete perimeter of the lake, but there are some quiet roads that pass within a few hundred metres, and help to provide a little elevation to get a better view of the water and the surrounding mountains. We did a complete lap, and despite a chill air, the afternoon sun was strong and enjoyable. By the time we’d returned to base we’d covered about 20 miles.