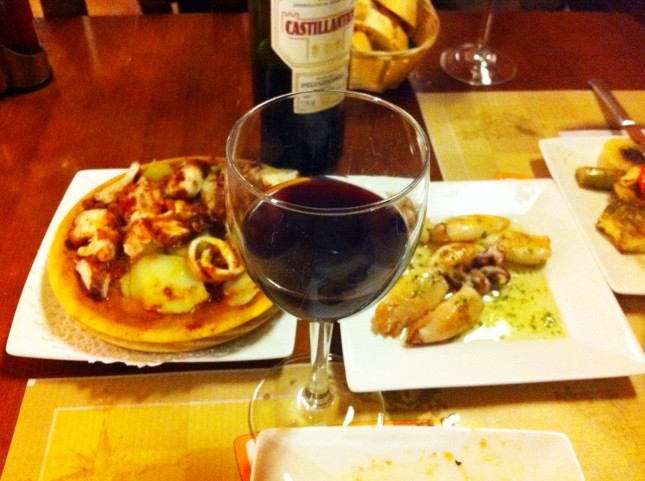 My word, our first half decent evening out since leaving home! After failing to get out for a walk today, we decided the wander into town by moonlight, and suss out the eating places. We stopped at one bar which had a few people in, sadly themed the ‘Cheers’ bar after the TV series. There were only Brits watching football, so after a small San Miguel we moved on.

What had been livelier bars along the front by day were now empty or shut, and an attempt to get into one lively looking restaurant failed as they’d just had a big group sit down. Almost giving up, we wandered a couple of streets back front the beach and found a tapas bar, seemingly part of a chain, but with plenty of diners who all appeared to be local. Usually a good sign, despite the pictures of the food on the menu (not usually a good sign) but at least we could identify what we were ordering.

As is the way with tapas, we ordered about six different dishes, although the waitress balked at the tortilla (omelette), seeing to suggest that we might have enough, or be fat bastards, but I said we would have it anyway.

All washed down with a €6 bottle of house Rioja which was very drinkable. We sauntered back along the coast, still by moonlight, watching the waves gently breaking along the shore.

2 thoughts on “A Night Out on the Tapas”