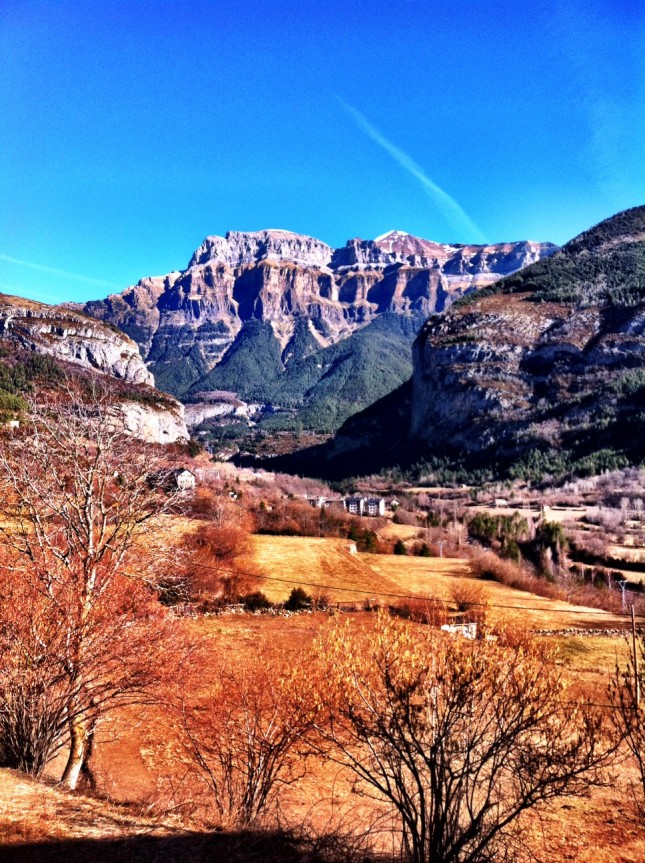 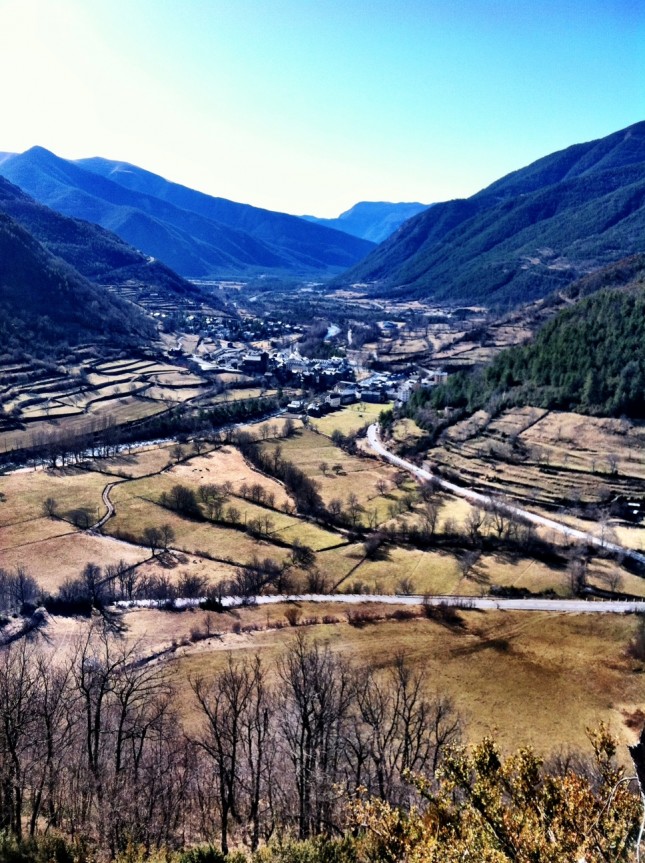 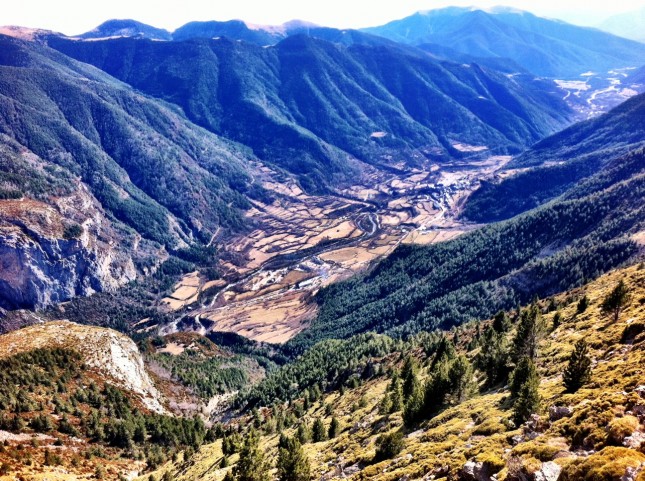 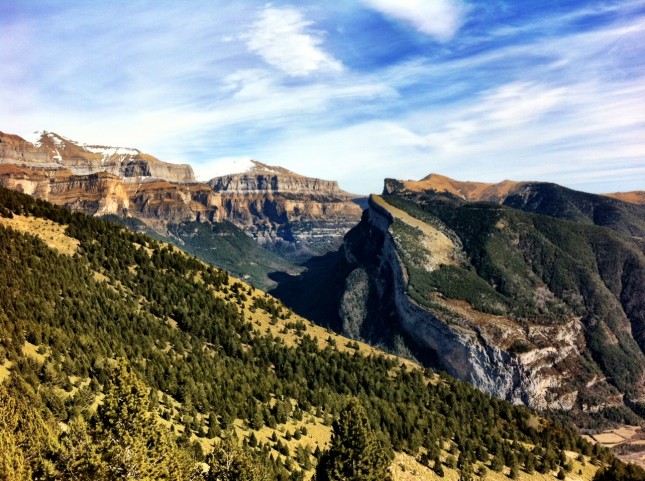 Yet another lovely morning, and so I got made my mind up – a walk in the Ordesa National Park, only half an hour along the valley from the campsite at Gavin. I headed for the village of Torla which is the access point for the park. I was hoping the visitor centre would be open so I could find a good walking route, but alas not.

I check my own maps of the iPhone and figured that at this time of year, and given limited time, I’d be better off with an overview perspective of the park, rather than walking through the park itself, so I decided on a route that started back along the road and then took off up the hills to the west of Torla. This I figured would give me a view across the park on the other side of the valley, and up the Ordesa gorge. I was right! It took about 2 and a half hours to make the ascent along the side of the valley until I got to a ridge with a small hut and cell phone tower, that gave the view I was after. This was at 2000m, I think Torla was about 1000-1200 or so, so not a bad climb. It followed a forest track so well graded as well.

As well as the caterpillars (see separate post) I was lucky enough to see about a dozen deer only about 100 metres from my position. I saw one running on the hillside above me, and on taking lower attention I realised there were half a dozen more. They knew I was there and were trying to distance themselves. I then heard a bark off to my right and below, and another three deer were trying to catch up with the main group. I thought the bark at first was a dog, but it appeared to be a warning from one of the deer to the others. They bounded off up the hill and joined the others. Despite having a good view over a large grassy hillside I lost track of them and failed to see them again.

After stopping for lunch and taking in the view and the lovely sunshine I headed back down by the same route (the alternative would have dropped me into a shaded valley), but then found a steep track that dropped more directly back into Torla to vary things a bit.

Once back at the van I decided to round off the day with sunset over the Col du Portalet on the French border. I set off up the valley, past the ski resorts of Panticosa and Formigal (glad I didn’t bother with skiing as the snow didn’t look that great, and they are quiet small ski areas). Portalet is right after the top lift station. I hadn’t realised this when we stopped here in December as I didn’t walk quite far enough over the border to get a view of the valley and the ski stations.

I stopped in the same spot as last time – the first time on this trip to return to a previous spot – and had a nice cup of coffee in he can and watched the sun starting to set. Unfortunately there was some valley cloud rolling through from the French side that meant I didn’t get much of a view, so I decided to see if wild camping would be any good on the Spanish side (not a great view) so off I went back into France.

I’ve stopped for the night at the same lake that we stopped at for a day and I went for a cycle up the mountain whilst Mel worked in the van. My word, what a change a couple of months makes, and something of a surprise. I expected more snow on the north facing French side, but the difference between north and south was like chalk and cheese (or Brie and Tapas). Spain was warm, glorious sunshine, and only patchy snow. As soon as I crossed the Col it was like a winter wonderland. The road was clear and fine, but walls of snow 1-2 metres high either side, cloud hanging low in the ski and the temperature plummeted. I suspect it’s largely due to the localised cloud – the forecast for southern France for the week ahead is actually similar to when we travelled south, so should be great.

So for now, Adios to Spain and Bonjour to France! I’ve already had to make the mental switch as I wandered around the shops and had to remember to speak French to the staff. So sad also to be leaving the mountains, I really do have a soft spot for them, and the rest of the journey will be incomparably flat by comparison. Tomorrow I’m heading off directly north with the intention of getting to the Lot Valley, to be explored the following day including Cahors. Assuming everything stays to plan and I don’t decide to head for the coast for a bit of sunbathing!