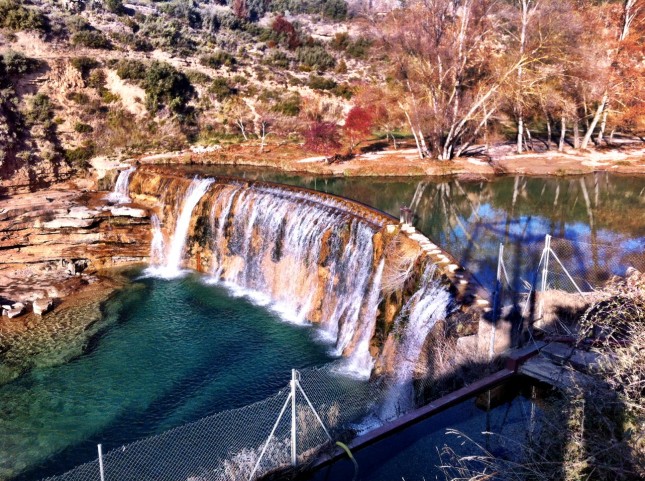 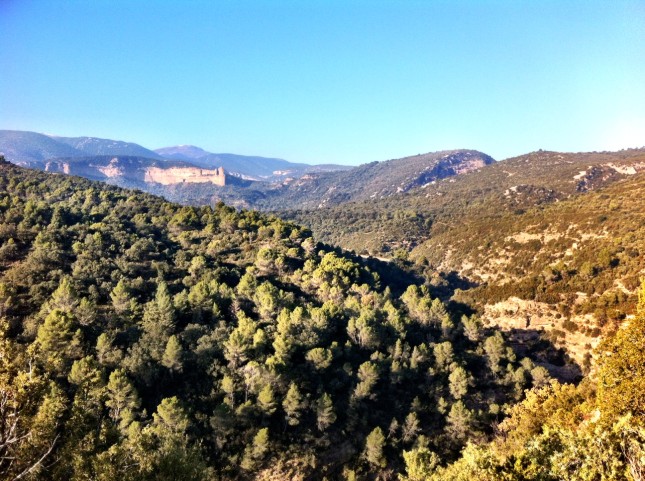 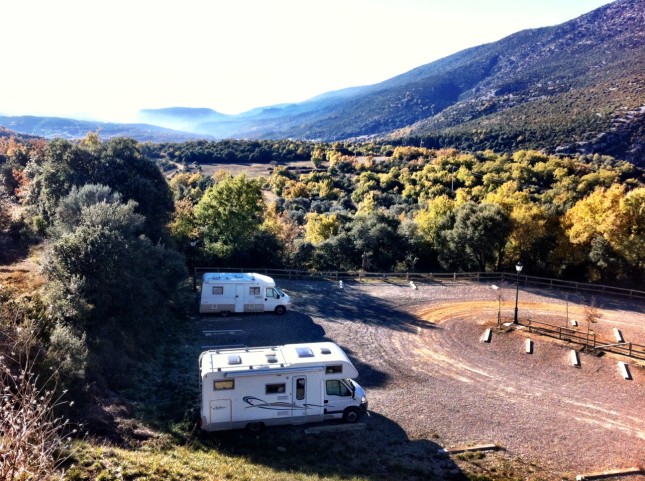 On leaving Heusca, which turned out to be a nicer place the the guide books would have you believe, we sort out a small, winding road that runs along the southern edge of the Parque Natural de Sierra y Los CaÃ±ones del la Guerra (that’s a mouthful), which the sat nav seemed reluctant to admit the existence of. But we found it ok, and it turned out to be one of the nicer drives so far. Not much more than a single track road with heaps of twists and turns as it made its way from one valley to the next. We stopped for coffee by the side of the road and enjoyed the view back towards Huesca and also the aerial display put on by a group of about 30 eagles, one of the things the Parque is renowned for.

On arriving in the town of Bierge, we hoped to find the tourist information open but it’s only open weekends this time of year. As the weather was so nice, we decided to stop and walk from here following a path from a water mill on the edge of town towards a spring about 2 hours away, according to the info board in town. It was a pleasant, easy going route, with even a wheelchair accessible section should that take your fancy. At a lookout point there was an old chap admiring the view who engaged us in conversation, to which I mean he spoke to is in Spanish and we alternately nodded politely and shrugged while try to work out what he was saying. The gist was that he only spoke Spanish because he’d never travelled the world like younger people now do. He learnt a little German in school but that was app and a long time ago, and not much call for it in these parts. All there is to do apparently is dance, drink and meet women, but that made him very happy.

The picture shows the view from the lookout, check carefully and you will see why the landscape is so admired, the geology is quite something.

We failed to reach the spring as the path wound through the edge of the valley. We might have made it before dark but without a proper map or torch, we decided it better to find a camping spot for the night.

We headed onto Rodellar which I’d spotted as a good spot in the middle of the park. Unfortunately the campsites are closed for the season, but there is a big carpark so we checked that out. Stern signs warned us of stiff fines for a dozen possible offences, camping included. There was another motorhome already there, and they turned out to be Brits who’d been there for 4 weeks. Avid climbers for which the town is apparently a Mecca. They’d had an early visitation by the local police who aren’t bothered about campers now that the sites are closed, so we found a spot to park up and settled in for the night.

1 thought on “Bierge, and the Sierra de Guara”