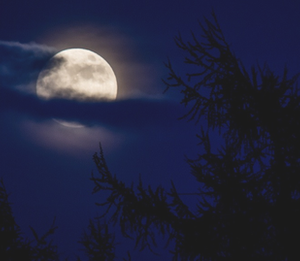 Apparently, the BBC are reporting that [tonight we have a good chance of seeing a ‘supermoon’](http://www.bbc.co.uk/news/uk-23013393), otherwise known as a ‘perigee’, which occurs when a full moon coincides with its closet point to the earth in its slightly elliptical orbit. The result is that it can appear up to 14% larger than at its furthest point, and when seen as it rises and sets relative to earth objects such as buildings and trees, it will appear to the eye much larger than normal.

Part of the BBC report is a classic:

> But as it got closer to the horizon, a “kind of optical illusion” occurred where it looked bigger when compared with trees or houses, she said.

> She suggested it might be possible to dispel the illusion by turning away from the Moon, bending over and looking at the sky from between your legs.

Of course they could have just said ‘compare the size of the moon to Uranus’, but that wouldn’t have been anywhere near as humorous.