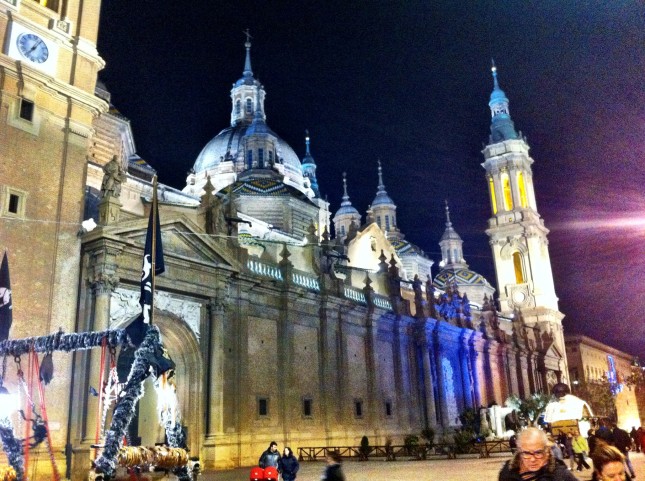 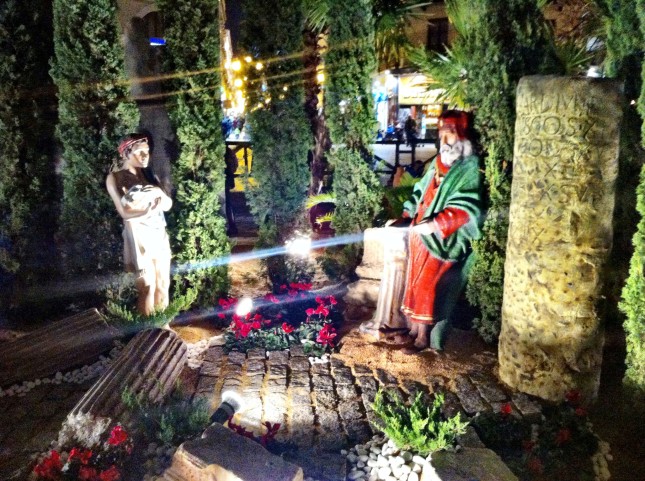 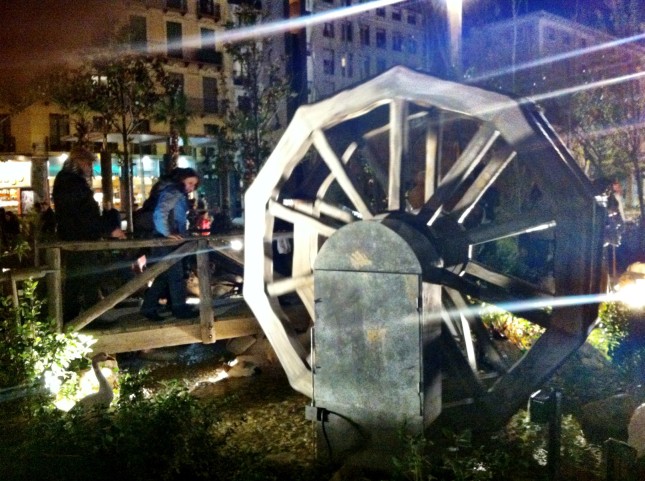 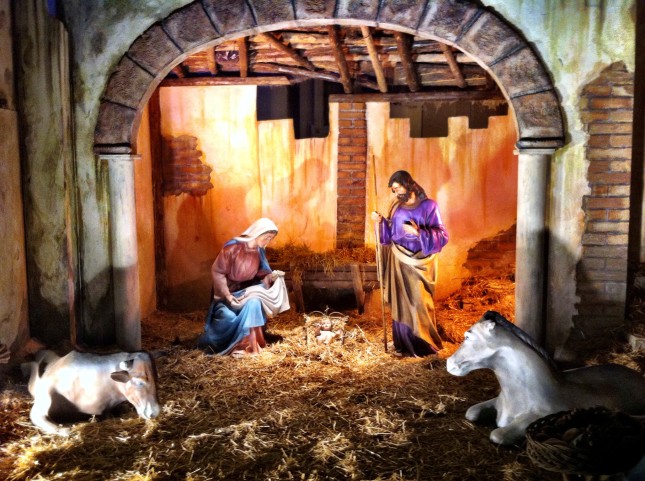 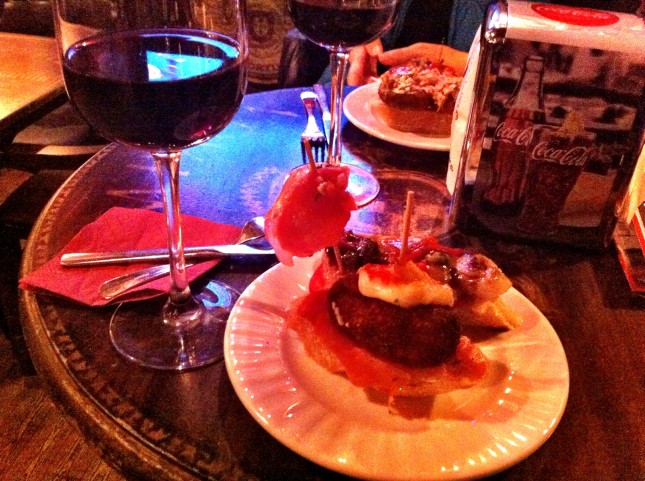 After a couple of days of over consumption of tapas it is time to move on from Zaragoza and head for the hills. We decided to stay for Tuesdays opening night of the Christmas celebrations! as there was much preparation going on in the main square. It’s almost the size of a football pitch, longer but thinner, and a large chunk was turned over to a depiction of Jerusalem on the night of the baby Jesus’ birthday. The other half was turned over to quant little stall selling all the shit you can, fortunately, only buy at Christmas!

That took all of half a hour to enjoy, and then it was time for more tapas. A little early in the evening, and many of the tapas bars were not yet open, but we managed to find a bar with and interesting selection and promptly consumed those whilst we tried to work out what the ball game was on the telly. I still don’t know, after an hour of frantic play they never one flash anything on screen to let you know, but it appeared to be Barcelona vs Skopje, wherever that might be! but going by the players names, somewhere east of the Adriatic. The best I can describe it was a cross between Basketball and Rugby, except without the full on tackling, and the ball was small enough to hold in one hand and throw overarm into what looked like a small hockey net. A mystery.

Today we headed for the mountains, or tried, but spent most of the day skirting the outskirts (what else) of Zaragosa in search of LPG, caravan supplies and snowshoes (an interesting combination granted).

We headed first for what we had as a local LPG station. If you’ve tried before to get LPG it sold in the same number of outlets as rocking horse shit, so dead easy to find. Id downloaded a list to the sat nav in preparation and knew there was one close to the campsite in Zaragosa, but not quite where. The sat nav identified the closet location as the cities taxi cooperative just a few hundred metres away. I had this recollection from my last visit to Zaragosa that it was not for public supply, so we headed to the next possible location, which turned out to be a carpark. There was another not far away, and that turned out to be a hospital. So we gave up for the moment and went searching for camping supplies.

We’d picked up a leaflet in the campsite reception for a caravan supplies outfit a few miles away and headed there only to find it a small lockup on an industrial estate and, well, locked up. Fortunately it was close to another LPG location, but that turned out to be a distribution point for petrol tankers and didn’t have LPG anyway. That wasted journey was partly offset by an excuse to visit Decathlon, and sporting good retailer, with a massive outlet at Puente Vicencia, just to the east of Z. It’s a massive plush shopping mall with several big names but the most excruciating Christmas tunes coming out of Butlins style loudspeakers (at least to my ears if not to the rest of the shoppers).

We carefully evaluated snowshoes and poles but decided in the end it was going to be a steep investment and we could wait till we were more sure of how much time we’d actually spend above the snow line. The suns by shining for over a week now, so it might be sparser than we found the other day. A check around the internet suggests many of the ski resorts are now open on the Pyrenees, so we should get some white stuff entertainment shortly.

After lunch we got back to the search for LPG, which we really needed to resolve before heading for the hills and no chance of LPG. Our only choice left according to the sat nav was the taxi coop, so we headed there with fingers crossed. On arrival, signs were prominently posted informing us that it was for taxi coop only, so it looked like we were out of luck. Mel decided to do what no man would do and go and ask the attendant. Good job too, because he said sure, fill your boots!

That job jobbed, we headed north towards Huesca. This is to be our launching point for a couple of days exploring the Sierra Guara National Park, a place reputedly littered with canyons, craggy peaks, vultures and not much else. Well probably be in the boonies for a day or two, so we’ll let you fill the void and the comments section with your pearls of wisdom.