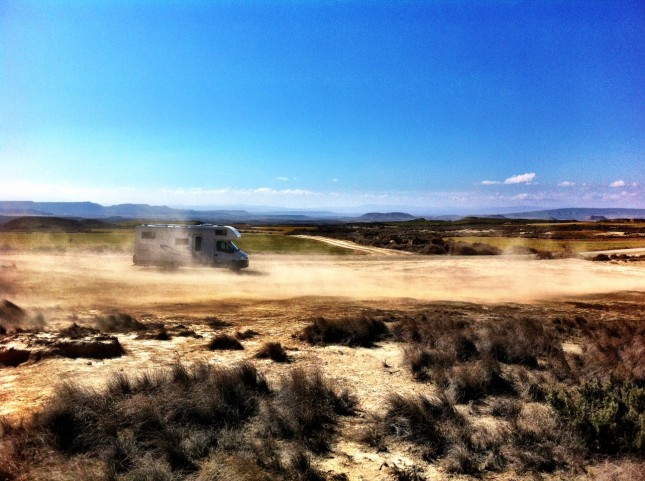 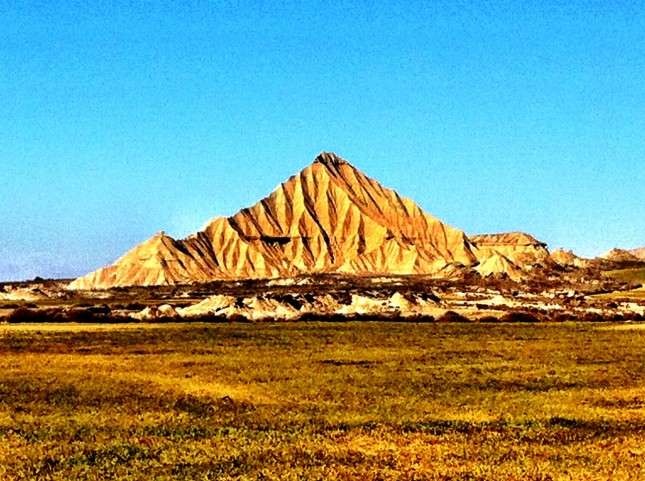 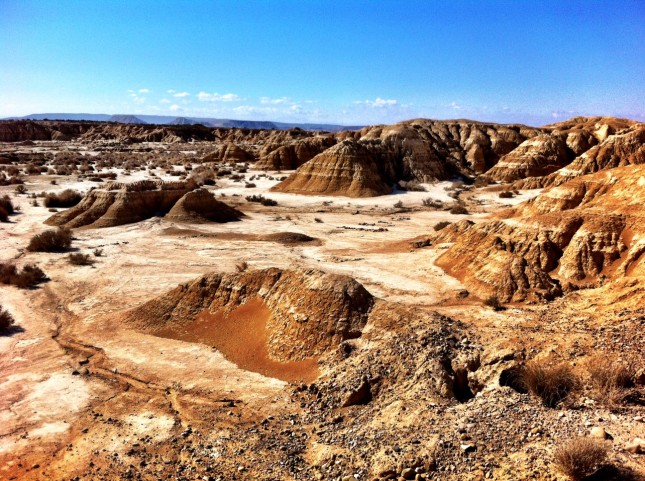 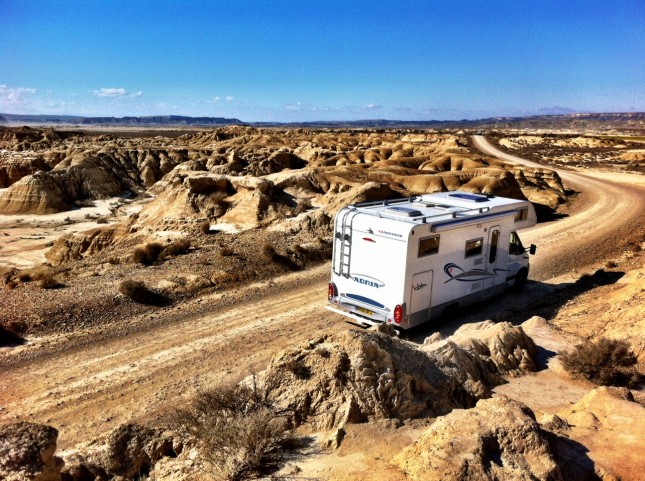 A sunny start to the day, but a bit of a stiff wind didn’t help make a quick departure from the site, and once heading west it was a fierce headwind that told much of the aerodynamics of the plastic spaceship. I decided I was in no rush, and just went with the flow, even of it was upstream.

I failed to top up with LPG in Zaragoza as the station pump appeared not to work. Yet another type of pump connector required, although one I had (dish type). The Spanish don’t seem to have any sort of standard, I think I’ve used them all so far.

I headed west to Tudela before turning off to Arguedas which is where you pick up the road into the Parque Natural de las Bardenas Reales. Except they put a bypass around the town and not yet updated the signs, so you go sailing past Arguedas and TomTom hasn’t got a clue, other then telling you to turn around or go right across ploughed fields. I eventually back tracked and found the road just on the east side of town. It’s a tiny road, pretty much single track and if it wasn’t for the signposts you’d have ignored it.

A couple of kms later and you come across the visitor centre, which apart from some taxidermy and fossil fragments isn’t very helpful. There is a map with cycle routes (mountain bike) but they mostly appear to follow the roads. Given the stiff wind, I give up on the idea of cycling around the place and stick with the van. I see other cyclists as I head out, and they aren’t admiring the view, just head down into the relentless wind, so I think I’ve made the right choice.

I head off on the tarmac road into the park, stopping briefly at the mirador which gives a nice view of the park area, but not photogenic. The park stretches as far as the eye can see, but the more interesting formations are some distance away, so getting closer will make up for the lack of zoom.

Most of the central area of the park is a military zone, in fact a live fire ground for bombers and jets, so the park visitor gets to follow the perimeter of the zone. Only those who have fast reflexes necessary to get the head between the knees are advised to try and cross the zone.

On reaching the gates of the military base, you can go either way around the perimeter, but it’s only now that it becomes clear that the road is not tarmac but gravel. The signs depict a 4×4 vehicle, not the family saloon, but there is nothing suggesting that Motorhomes are not welcome, so I set off on the longer of the legs. There is an access road on the other side of the park that I want to take north so I don’t have to back track. I figure that the longer leg gives me more scenery, and the view from the mirador suggested that sir took had the more interesting landforms.

Slow progress keeping the speed below 10mph so that my teeth didn’t fall out and the van do a comedy, Keystone Cops-esque falling apart at the seams. The landscape is remarkable. Weathered by millennia, essentially it’s a valley that was filled with sedimentary deposits from the surrounding hills, those deposits then being erode in turn by wind and rain, leaving a mixture of bluffs, escarpments, and what looks like the product of an over active cook with a jelly mould.

I stop for lunch in a rare parking area in which a dozen or so teenagers and lurking, trying not to loose their Jack Wills to the fierce wind and sandblasting they are getting. There is an adult amongst them, but his car does not double as the school bus, so they are obviously waiting for reinforcements.

I carry in, wondering when my turn off might come, and get stuck in a traffic jam. Me, and about a hundred sheep being led by a Land Rover. I can’t work out why the sheep are following the Land Rover, but they obviously believe they are onto a good thing. There are rams amongst the sheep, who are quite literally head and shoulders bigger then the ewes, and a number of them have the most impressive handle bar horns. I fear for the paint job on the spaceship, but they are a careful bunch and pass without incident.

I then find the turn off I want, but the signpost tells me thigh ever way I go I’ve got at least 20kms of rough stuff. It didn’t say it was rough or not, but given the form do far I was not expecting an improvement.

So I took the turn I wanted towards Carcastillo. More of the same, but as this was not the signposted entrance to the park, it was the road less travelled, and therefore maintained. I had to keep my eyes peeled to avoid potholes and washouts that would have swallowed a car tyre without a second thought. And the Motorhome, with the ground clearance of the Costa Concordia, was potentially easy prey. On several occasions I had to choose a careful line straddling a gulley, hoping that the sides would hold. Fortunately the ground was not hungry today and I prevailed.

After about 4 hours of trundling over what I thought would take one and a half, I found Tarmac again. A single track of tarmac set in what was now a Caledonian inspired landscape, at turns straight as a die apart from them ups and downs, and at others a series of hair pin bends.

I found civilisation again at the foot of the Pyrenees, and headed east towards Jaca. Sunday afternoon and the masses are heading back out of the mountains after a days skiing, but are heading west so don’t impede my progress. There are a good many Motorhomes amongst them, and I positively wear my wrists out with all the waving.

I’ve found a campsite in Gavin, an expression which frankly sounds like Little Britain, but whilst I slipped in easily it was the result of skilful driving, and not innuendo. Nearly dark on arrival I’ve not much idea of the surroundings apart from hilly, but it is at the foot of a very attractive passage (stop sniggering) that crosses the Pyrenees at the Col du Portalet, which coincidentally we visited on the way south back in December. Depending on the wind, I’m going to head that way in the morning and take a gander at the ski resorts of Panticosa and Formigal, or consider walking or cycling depending on conditions. Or just head for France! What choice!