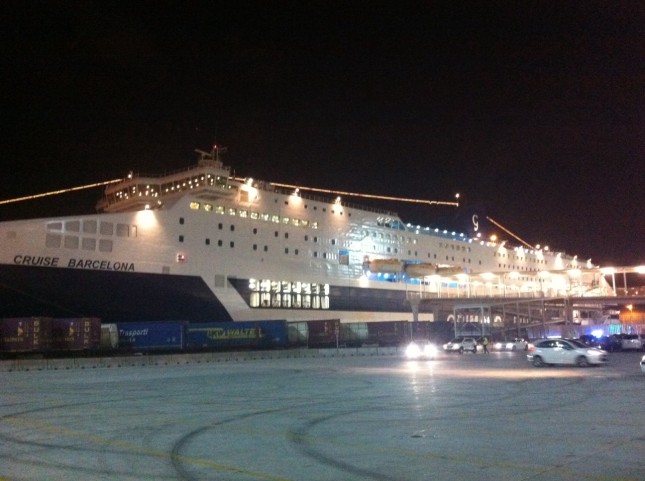 If there is a definition for ‘shower of shit’ then the experience so far of Grimaldi Lines is it, and I’ve not even got on the ferry yet.

Just stood for 45 minutes waiting to be served in the ticket office whilst they helped dimwits as slowly as they could, then it took all of 10 seconds to issue the tickets.

Went round in circles trying to find the port in the first place as it’s so badly signposted. What wanker decided to print the port entrance sign black on black. Arty, but not very fecking helpful at night!

All not helped by a further water leak just before we set off for the ferry, the filter that attaches to the new pump is in two parts so that you can clean it, but it decided to come apart and fill the service void with water. I only noticed as I could hear the tinkling of water into the ground, if we’d started driving it probably would have siphoned the entire tank.

I’m not sure it was wise to book a sea crossing after the recent trouble with water.

**Update:** We’ve yet to leave the dock, and already I want to abandon ship. Not only were we asked not to eat our own food in the lounge area (the only apparent option was outside on the ‘pool deck’, which was, well, outside, and despite being Barcelona it is decking December at 10pm so not exactly the best time for alfresco dining). We are now back in the Lounge bar, and there is some ‘live’ entertainment in the process of tuning up – despite the canned music still playing and a really annoying alarm from some piece of kit behind the bar, like a freeze or something that wants plugging in. I think I may not survive the journey.

1 thought on “Grimaldi Lines from Barcelona to Civitavecchia”