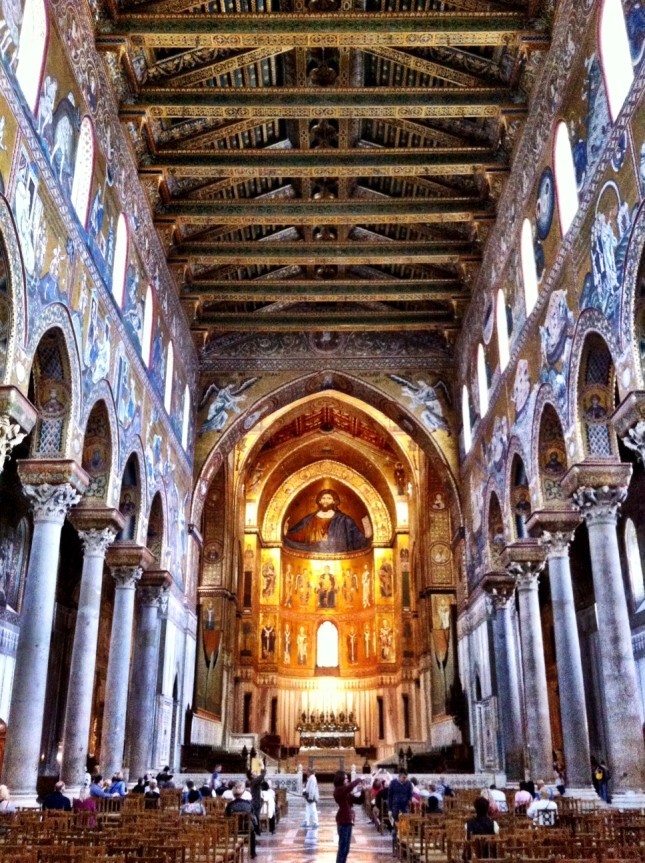 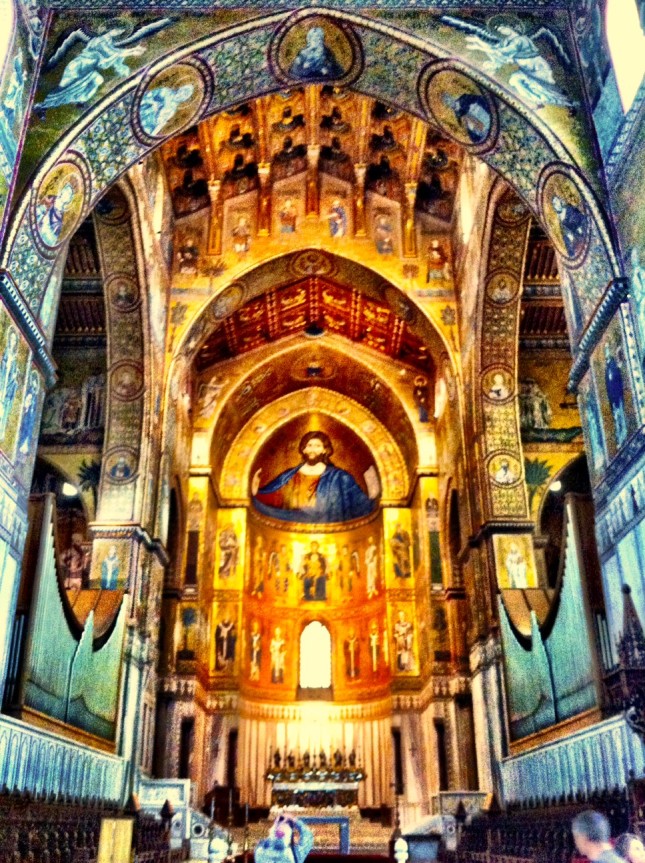 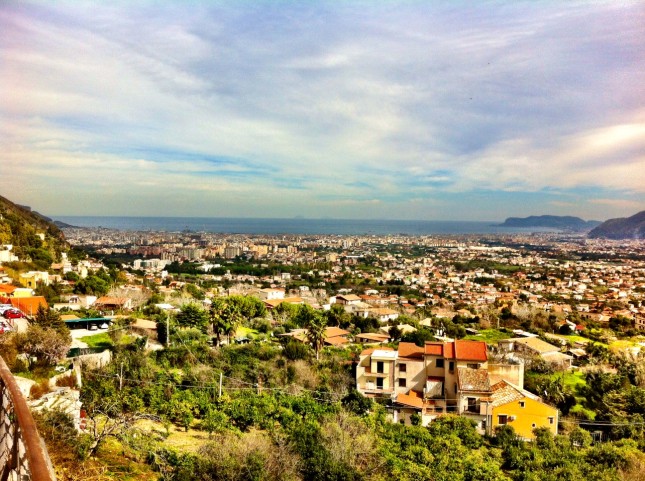 Mel got away without any problems, and reports since that there was no problem with getting back to Somerset on the train, which is all good news. After dropping her off at Palermo airport, I drove around the peninsula towards Palermo, and then up into the hills above the city to a town called Monreale. The cathedral is of some note, because the interior is pretty much covered in mosaics from top to toe. Floor, walls and ceiling, mosaics of varying tile size and colour, but the effect is pretty special. The altar end is luminous with gold. The outside of the cathedral is not so much to look at, but you also get a good view back down the valley over Palermo. I could see the port from which I’ll be getting the ferry in a couple of weeks time.

Whilst in Monreale I took the opportunity to do a bit of shopping, and as there was plenty of fresh meat, fish and veg on offer, got a good selection of each. I also noticed that the hairdresser next to the fish shop was looking less than busy, standing in the doorway watching the world go by. As I’ve been in need of a haircut for about 3 months, I jumped at the opportunity. Of course my Italian is limited and as I’d not prepared useful expressions, we had a game of charades to explain what I wanted. It turned out the guy in the doorway was not the hairdresser. I’m not sure what that chaps job was, although he did sweep some of the cut hair away before buggering off for lunch.

Once we’d established the basics, shampoo was mentioned so I was confident that I was getting a wash and cut. The hairdresser spoke a little English, although as things progressed I was starting to assume that his interpretation of ‘short’ and ‘long’ were not quite the same as I had in mind. I think he was related to Edward Scissorhands going by the technique, that’s about as close a depiction I could give, and certainly nothing like my experiences to date at a hairdressers. Unlike an English hairdresser, the cut came first, not the wash. The comb deftly flicked the hair away from the scalp as the scissors scythed in. It was almost a blur, and I was starting to worry that my ears might get a trim as well.

After a while, the pace slowed. He protested that it would not look good for the back to be ‘short’, but as I mentioned above, I have a feeling he meant long, because it is now, in fact, pretty short, although not as short as the sides. The natural wave of my hair, which I quite like, is now consigned to the floor of the shop, replaced my something more, as my hairdresser told me, ‘Italian Style’. Once the basic length was achieved, we got to the wash phase, and then back to the chair for the final preening, mousing, blow drying and a brief attack with the cut-throat razor to get rid of the stray bits around the edges. All-in-all, a good experience.

I was sure he’d said €4 before I’d sat down, and I’d repeated it to him, but he looked rather forlorn when I gave him the 4 coins, and only then did I twig that he’d said fourteen, which to be honest seemed much more appropriate for the time and skill expended.

So there you go, relieved of €14 and most of my hair, but that will teach me for not being sufficiently prepared in the language of the barber of Monreale before crossing the threshold.

Whilst I’d been ensconced in the hairdressers, the sun had come out, and boy was it strong on the forehead on the walk back to the van. Or maybe that was an indication of just how short he’d cut my hair. But the van thermometer confirmed it – 35 degrees! Ok, that was in the van, but it was certainly well into the twenties outside, definitely t-shirt weather.

I spent the next hour winding through the hills before descending to the coast again, an interesting drive around the back streets of some town whose name I never got whilst trying to find a beachside spot for lunch. And finally the drive back to San Vito Lo Capo where we’ve been for the last couple of weeks, as it is by far the nicest place in Sicily we’ve experienced.

The wind got up again in the evening, I was certain I would hear the limbs of the surrounding trees cracking in the night although it passed without event. When I went to bed, the van thermometer was still showing 28 degrees. Lovely!

3 thoughts on “Mel Flies Home, I Get Robbed”