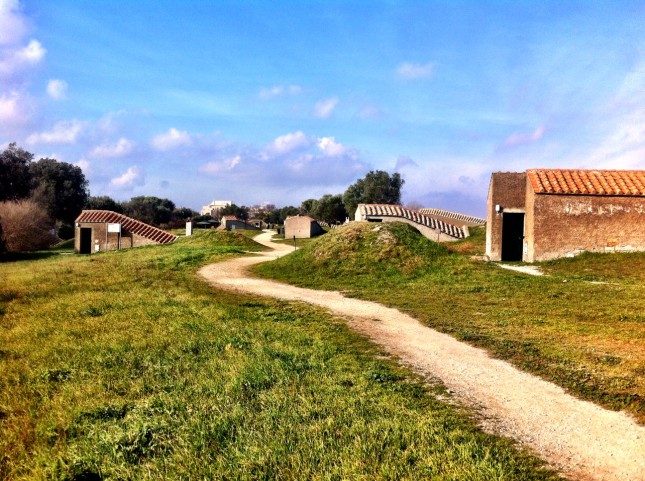 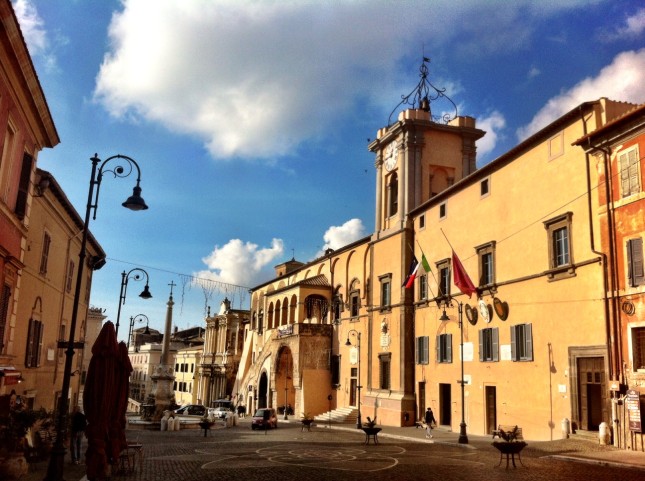 After arriving by ferry at Civitavecchia, we headed for the town of Tarquinia as it was not too far away and our book showed two possible overnight camping spots. The first was in the town and turned out not to look like the photo, it was sloping and mostly under a low canopy of trees that limited where you could park. As a result we headed for the alternate, nearer the beach. This was a large field that would be a popular spot during the summer, but at this time of year was deserted. We ended up parking by the side of the road which was fine.

We had breakfast facing the beach, although a row of beach shacks limited the view of the sea. But pleasant with the sun shining.

We headed back to the town and towards the Etruscan burial sites atop the hill. At first it looked to be shut up, but eventually we found the main entrance tucked between some buildings off the main road. The tour of the site was interested, there are over 6000 identified burial chambers on the hill, although only a handful have been opened up to the public, those bearing interesting wall paintings depicting the interests and desires of those entombed.

The burial site itself isn’t all that interesting, partly because off looks like a collection of modern huts on a spare hillside. You don’t really get the context of the place. The chambers themselves are often quite small, each accessed one at a time via a short staircase underground, and then there is a glass door through which you peer (human breath has damaged the artworks so they are now climatically controlled).

After the tour of the site we walked back into town and went to the museum which was a great help with context. The burial sites originally had conical structures built from earth and stone over the chambers. The whole thing is a bit like the tombs of the pyramids in Egypt but not on the same scale, although what they lacked in scale they made up for in sheer numbers. Inside the burial chambers the deceased were placed into elaborately carved sarcophagi, and many possessions and offerings. This all took place about 700BC.

So my advice, if you find yourself there, so to definitely include the museum visit as it will help greatly with the understanding of what is left of the burial sites. The info boards at the site failed to convey that to me.

We headed off looking for a nice lunch stop with a view but failed to find one, ending up outside some self-styled ‘Old West Ranch’ although we did get to watch someone exercising their horse.

Our destination for the evening was Lake Bracciano, although it was dark by the time we arrived. We are getting caught out by the shorter days now we are further east, it’s dark about 5pm.

Intending to visit Rome over the next couple of days, taking the train in from Bracciano before we decide where to head to for Christmas.

1 thought on “Tarquinia and the Etruscan Burial Chambers”