Today was to mark the return to the Via Verdes de las Ojos Negros, most of which I cycled back in January. I didn’t make it quite to the end at the time, to the mines themselves at the head of the old railway line, at Ojos Negros. As I was heading broadly in that direction to get to Zaragoza, it seemed rude not to see what I missed out on. More on that in a minute.

In order to get there, I decide on a scenic route via the Alto Tajo National Park. To get there, some promising river valleys and gorges. But which way?

Fortunately our Explorer Spain book had a suggested drive through most of it, so I went for that. Getting out of Madrid was entertaining. If you think the UK’s Spaghetti Junction is intimidating, don’t try Madrid’s motorway system. Every motorway appeared to have another one adjacent to it, and a confusing set of slip roads and parallel sections to move from one to another. Whilst I managed to negotiate the route that TomTom described, I was not so much looking at the road as using TomTom as a heads up display. 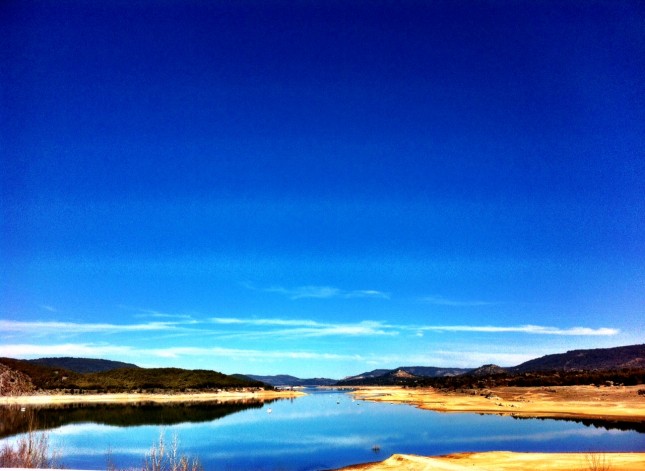 Once put of the confusion I headed south on the NIII which heads south west towards Valencia, then turned north at TarancÃ³n and headed towards SacadÃ³n and the Emblase de EntrepeÃ±as. Nothing spectacular to start with, just quiet rural roads and the odd village. To reach SacadÃ³n you cross the dam at the head (or should that be foot) of the reservoir. The was the first site of the kind of scenery I could expect today. A deep gorge with towering escarpments. Once across the dam via two tunnels the view opened out, and my my the EntrepeÃ±as is one hell of a pretty lake. Golden shorelines around beautiful blue waters and a similar skyline, it looked like a mirror. 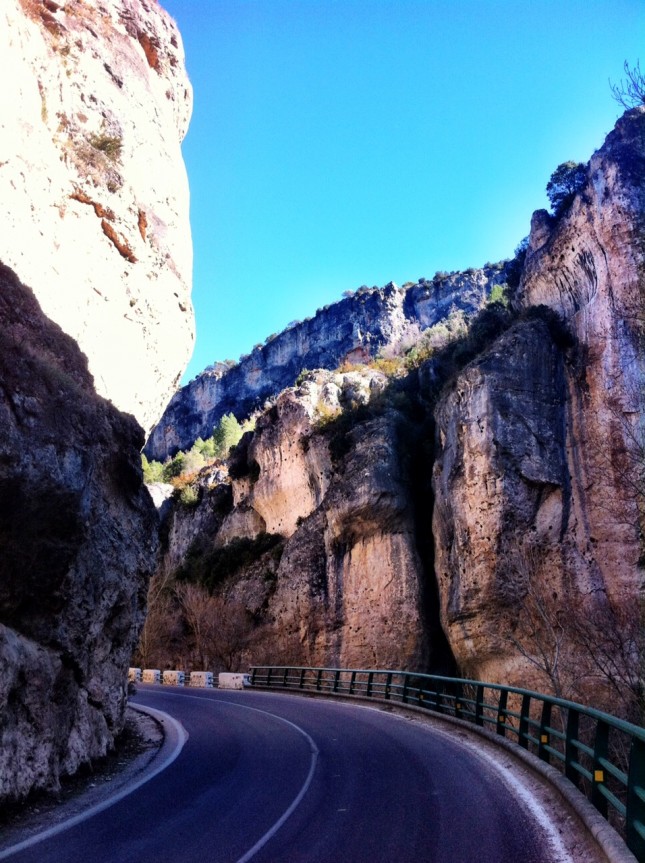 The narrows of the Beteta Gorge, between Villaconejos de Trabaque and Beteta

Following the guide, I took the road to Villaconejos de Trabaque (literally ‘Rabbit Town’) although was no sign of the floppy eared ones today. You then take the road towards Beteta via Priego which takes you via the fantastic Beteta Gorge. Golden yellow and grey escarpments rising straight from the road are quite breathtaking.

Dropping southeast again towards Peralejos de las Truchas and Terzaga you get more of the same type of gorge, this time with more solitary escarpments that look like castles rising from the valley floor. You the rise up onto the Alto Tajo with distant views of many gorges wending their way into the distance. I was sorely tempted to wild camp here, despite the pockets of snow on the ground, but decided to press on to Ojos Negros. 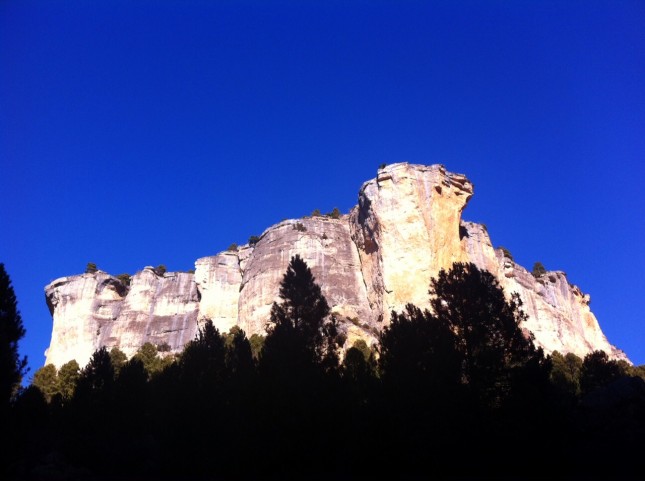 The route then dropped down through forest and farming to Molina de Aragon with its castle perched on the side of the hill above the town. Travelling east towards Ojos, the Aragon countryside opens out into a eye poppingly wide valley surrounded by hills. The colour of the soil here is a rich red, reminiscent of the Brendon Hills of home, and evoked great memories of the cycling trip along the Via Verde where the earth seemed set on fire as I crossed into Aragon. 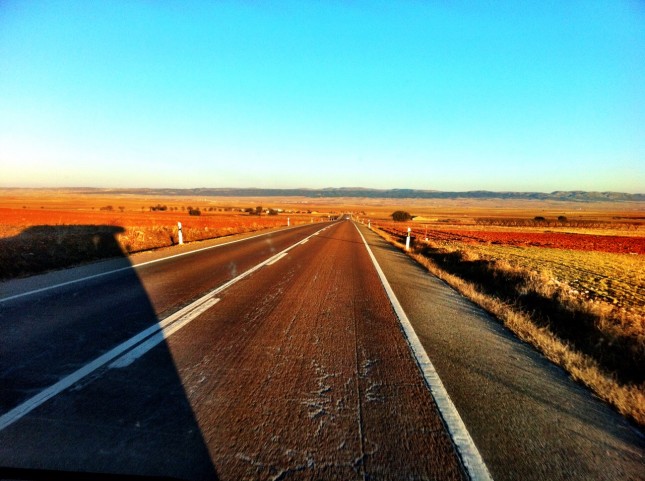 Descending from the Alto Tajo from Molina de Aragon towards Ojos Negros, Aragon

I turned west almost back on myself for the last 5 miles towards the town of Ojos Negros, the setting sun dazzling my eyes and hiding the view of the mines. I drove straight through the village and up the hill to get a better view, and pulled in at the old windmill above the town. The view to the west was of the mines, although now in shade as the sun set behind the hills from which the mines extracted ores. To the east I could see out across the valley, easily 40-50 miles distant. Looking southeast from the vantage point of the windmill I could see the ridge of hills above Teruel that I remembered skirting, then cycling out across the valley floor to Cella before heading back to base. Looking now, I was so tantalisingly close to the end of the line, I really should have carried on! 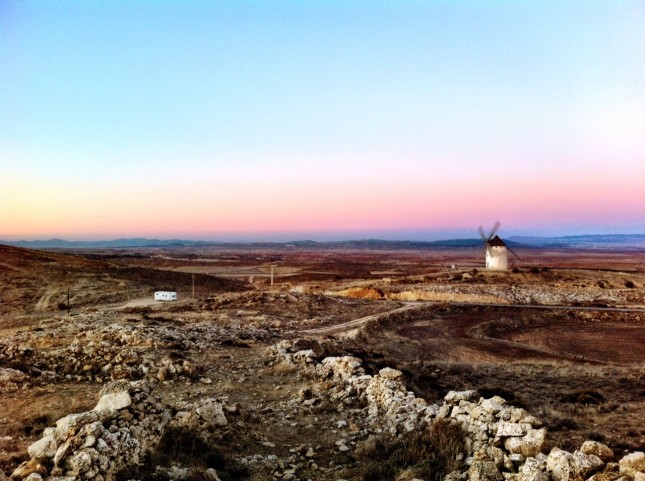 The Molino de Viente (Windmill) at Ojos Negros, Aragon, and my wild camp for the night

The view east is too good to miss in the morning, so I’m staying put, wild camping with the alarm clock set for sunrise. I’ll see if I can get a closer look at the mines before heading off to Zaragoza for tomorrow nights stop. Laundry duties beckon, plus a wander around the town, and maybe a few tapas!

1 thought on “The Return to Ojos Negros”