A lovely day for a walk – a slight nip to the air to keep you cool – occasional prolonged breaks in the cloud to allow enough warmth through as a good excuse for taking a break from the exertions and bask in the sun. We didn’t get off until about 12 noon, but as the route description we found suggested only about a 2.5 hour round trip, this was plenty. The route was for the Cruz de Calar, an iron cross on the peak above the town, and then back the same way. We thought this a little lame, and our intention was to walk the remainder of the ridge to include the Alto de Celar and the Collada de la Gitana, then return by skirting the edge of the hill above the valley. 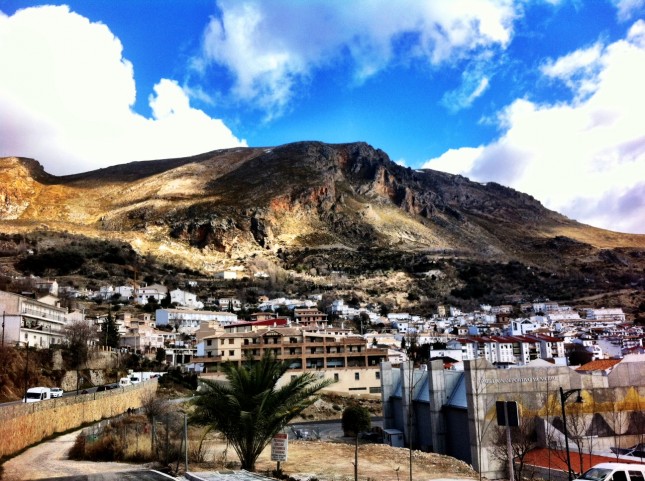 We walked a kilometre or so along the main road into GÃ¼Ã©jar Sierra village, where you get a lovely view of the ‘lump’ rising up above the town. This is the same lump that I likened to Ayres Rock a couple of days ago. We continued along the main road, then turned uphill into the town square, a neatly tiled plaza that rises from the sloping roads that meet at this point, a few trees for shade, and water spouts flowing with fresh spring water from the hills above. Lovely in February, I’m sure its even more delightful in the heat of the summer.

Following the instructions to get out of town, we climbed up some steep roads and even steeper allies. Misreading the instructions at one point we started to walk up a drive and beyond towards a field before the elderly owner called us back and attempted to put us right. About the only bit I got was ‘Camino’ but basically the gist was ‘walk up the road’ – I’m sure he’s had to reroute people on more than one occasion. So back to the road, which turned into the expected dirt track until we reached the town water plant, then off up along rocky switchbacks and far above the town. It wasn’t long before we could look back down the hill and see the village receding, tiny lorries and cars and even tinier people could be seen moving about in the streets, and the noise of a impatient horn – which as best as I could make out was one of the those compact little roadsweepers that look like they were designed for Postman Pat – the driver of which was either very happy in his work and wanted everyone to know it, or was trying to prevent parked cars from impeding his progress by sheer will alone.

As we continued to climb, a vertical rock face soared up to our left. The rock is a mixture of colours here, greys, ambers, yellows and reds, and when the sun shines the contrast is fully revealed and makes quite a spectacle. We came across a herd of goats, and what appeared to be the goat header off to one side keeping his eye on us as we made our way amongst them. There were a number of mountain dogs amongst the goats, some of which were putting in a little overtime by making the effort to bark at us lest we have designs on any of the goats. I was content with taking a few photographs, which the guard dogs seemed to be content with, although the goats had other ideas and were not being very camera friendly. If anyone wants a photo calendar of goats arses, I’ve probably got a few I could contribute.

The path then splits, straight on would take us over the Col into the next valley, but our route sent us off to the right and directly up the face of the hill towards to the Cruz de Calar. We could make out the cross on a rocky promontory – not the actual peak of the hill, but maybe 200m lower – which jutted out from the surrounding rocks. As we got closer it was obvious this was a ‘bogof’ (Buy One Get One Free) deal, as there were in fact two iron crosses (1550m). Both were festooned with the remnants of flowers and herbs – apparently the whole town comes out sometime in May, climbs the hill to the cross(es) and does a bit of festooning – although for what purpose I’m unsure. After a couple of vertiginous photographs we decided that carrying on up and over the hill would be in order. 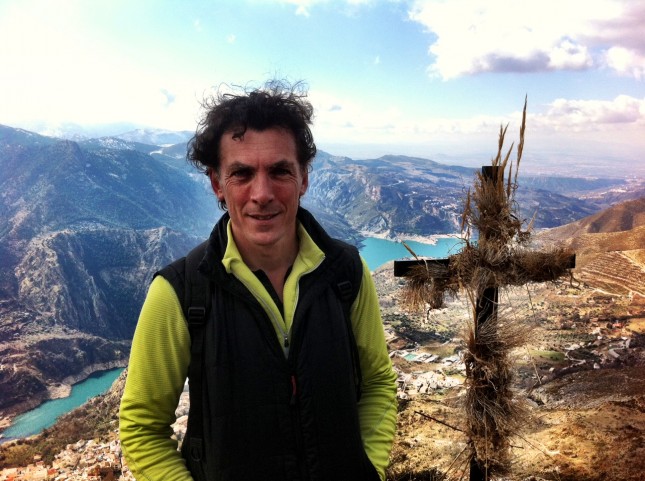 As we crested the initial peak – the Cerro de los Parapetos (1750m) – we came across a number of circular stone structures, about 3-4 feet high. Initially not sure as to what they were, and none the wiser from the route description which had ceased at the Cruz, it was only after realising that there were partially filled trenches running between them, and a couple looking very concrete bunker like, that we deduced that they were fortifications. On doing a little research on our return later, I did confirm that they were in fact from the Spanish Civil War.

We stopped at this point, perched on the retaining wall of a machine gun nest, and broke out the ratios. Out of the wind, we were able to sit in relative comfort (if your idea of comfort is a concrete sofa), and look out across the mountains to the west – MulhacÃ©n, Valeta and others. After a stop of 20-30 minutes, rations depleted, we set off again, across a depression that was boggier than would be ideal, hopping between tussocks, frozen snow and gravel to try, unsuccessfully, to avoid the mud. The ground then rose to Alto de Celar (1860m) a rocky outcrop marked with a pile of stones. Having already taken in the view, we pressed on, scrambling down the slightly rockier slope from the summit, not particularly steep but needing to tread carefully to avoid awkward boulders concealed by the lying snow.

The route then opens out onto a Col, the Collada de la Gitana. Looking out across the valley the view takes on a particularly Alpine feel, although the ground underfoot reminds me more of Exmoor. We struggle at this point to see the best route – along a track to rejoin the road, straight down through what appears to be a farm which is fenced off, or along to the right past some wandering cows. We aim down, along the fence line, then realised that there is a footpath, or at least a track, that heads off in the direction of the cows, and looks like it will skirt along the edge of the hill beneath the sheer rock faces above, but still high above the valley floor. The cows don’t offer any assistance at this point, unless their meaning is that there are more important things in life, such as chewing a bit of grass, even if it is a bit ropey at these altitudes. The brambles look tastier. 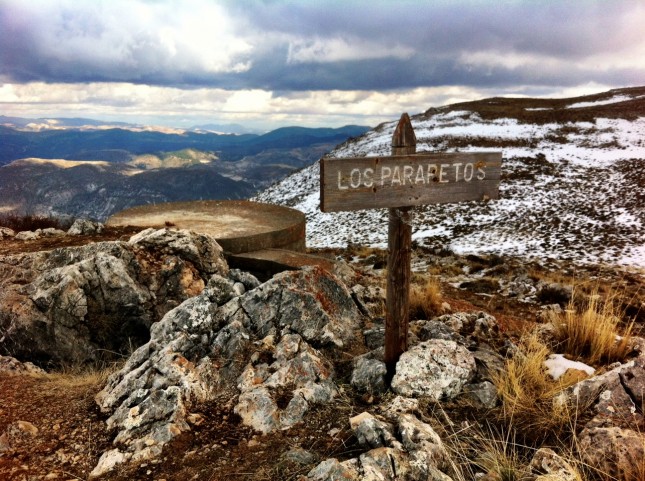 The path turns out to be a corker. We wind in and out, descending all the while, and the geology seems to be in two, if not three minds as to what it wants to be. There are sheer cliffs of stuff that looks like granite, other sedimentary rocks and something underfoot that looks a lot like flint. The cliffs tower over us from the right, over a hundred metres, maybe two hundred in places. There are what appear to be caves in the face of the rocks, and we round one corner to be greeted by great standing stones and boulders shed from the cliffs above, sitting pretty on the landscape as if wheeled in for an art installation. 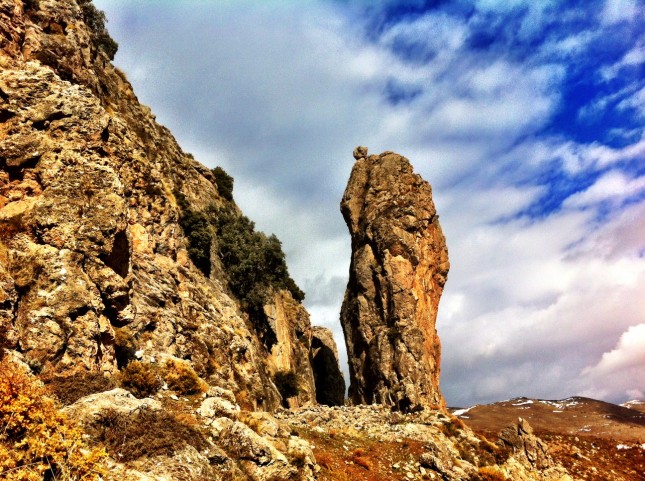 The terrain now starts to become more managed by human hand, fences start to appear and great circular water storage containers, which appear to be being fed by springs from further up, neatly (and often not so neatly) piped in via modern plastic pipes that snake across the ground, offcuts discarded without a great deal of thought. Lower we go, and here we start to find barns and cattle sheds, some occupied by cattle that look like they have an interest in us, but only as to whether we might be the ones that feed them.

Finally the path comes to an end and we are deposited onto a dirt track that winds further down towards the village, and a rather alarming yellowy-orange coloured asphalt football pitch with a commanding position over the town. Best not to kick the ball over the fence from this spot. The track turns to road and we are back at the point of our earlier navigational error, this time able to keep going straight ahead as we can see familiar roads ahead that lead through the Bario Alto (upper neighbourhood), and on down the road to the campsite.

1 thought on “Walking in the Hills Above GÃ¼Ã©jar Sierra”