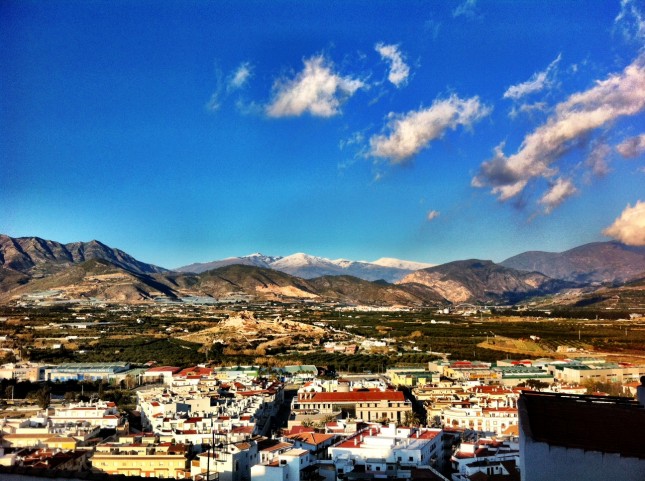 Snow on the Sierra Nevadas, as seen from SalobreÃ±a on the Costa Tropical 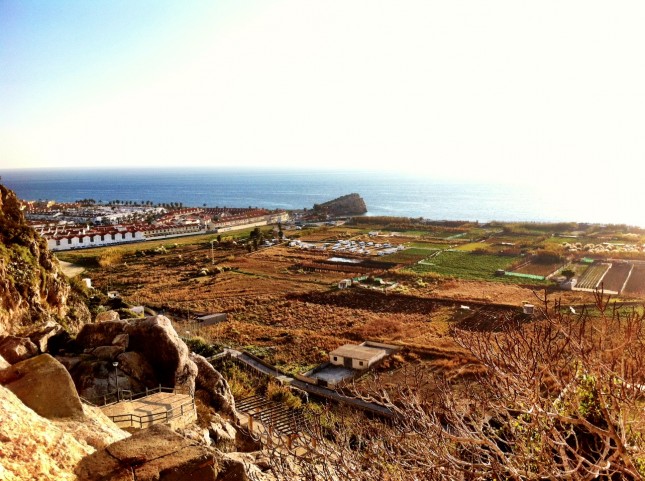 Just a short hop along the coast today for a change of scene. The camping at Castillo de BaÃ±os was actually quite fine, but only if you were happy to sit in a deck chair all day, or have the means to wander further afield, i.e. a car. You could have taken the bikes out, but it was either a short coast road, the main road, or straight up a 1,000m hill. Ok, I could have done it, but we knew that just along the coast it in theory gets a lot better.

So hence the drive through Motril, where a failed search for a supermarket was conducted – Sunday is not really the day to do it, nor in the early afternoon. We aimed for SalobreÃ±a because it was on of the places we considered for renting an apartment for the winter, before we decided that motorhoming would be a fun thing to try. Also, according to our campsites app, there was a Wildcamping spot here. The Spanish Police usually move you on if you park on or near the beaches, probably in part because there are lots of campsites, and probably because it cuts down on opportunities for nere-do-wells.

But this one is well populated with vans, probably about 30 here and a similar number in another area a few hundred metres away. I don’t see any other Brits, it seems to be mostly French and Germans, and going by some of the setups they are full timers, or at least keen on Wildcamping as much as they can. Talking of deck chairs, we did as the others did, and sat in the sunshine for lunch and for most of the early afternoon, whence I fell asleep for a bit, which was lovely. Well it is Sunday! As it started to chill down around 5pm, we went for a walk along the beach and around the town, stopping for a look around the castle and taking in its views along the coastline.

We are now in striking distance of the Sierra Nevada mountains which you should be able to make out in the background of the pictured. As you can see, there is some snow on them, so probably later this week we will have to go and explore some of the white stuff.

2 thoughts on “Wildcamping in SalobreÃ±a”