Driving from Ojos Negros down to Zaragoza, I’m starting to develop a soft spot for the Aragon landscape. Lots of lovely hills and valleys, extraordinary land forms and stunning vistas. A real pleasure to drive through, must make a note to come back and explore more on the bike.

The municipal campsite is relatively modern with all the expected facilities, although the washing machines seem to need a bit of coaxing to work – not the machines problem but you need to put in a token which then seems not to work properly. I tried two difference machines and had to call on the campsite handyman to come and give it a thumb. Same thing Saturday morning when I tried to do another load, and another camper was also having the same problem.

I had a pleasant chat with the chap in the RV next door, a Brit about my age. He and his wife came to do as we did, over-winter 2010 in Spain after his Amusement Arcade business went tits-up in the recession. They decided that going home was not really an option, so have stayed ever since. She now has a job teaching, and he is also doing a bit of English teaching, but is finding it hard to get work as his Spanish is not good, whereas his wife has a Spanish degree, so has found it much easier. 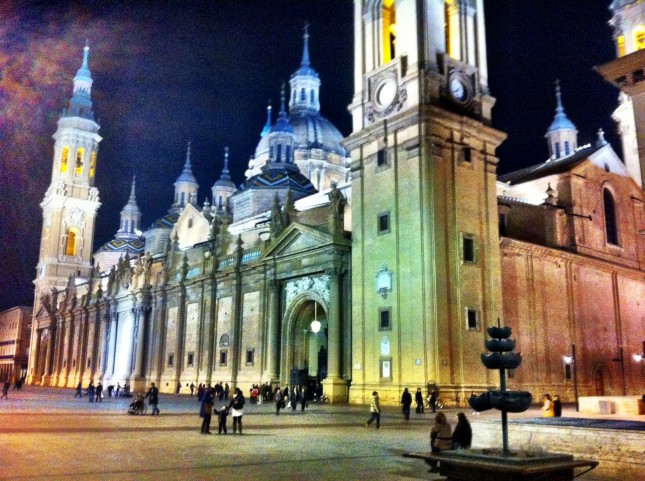 It was a 4 mile walking into the city, exercise that I badly needed so I had to explain to the receptionist that I enjoyed the walking, despite her rather odd expression. The campsite is on the edge of town in an area of recent and ongoing development, so I had to negotiate roadworks and odd deserted roads before I go onto the main drag into the centre. That immediately felt a lot more urban and cosmopolitan, but was a straightforward walk.

I headed down to the basilica, which is the main attraction in Zaragoza, a stinking great church dedicated to the Virgin Mary who is said to have descended in front of Saint James not long after the crucifixion and resurrection of Jesus whilst he was praying on the banks of the River Ebro (which runs through Zaragoza and alongside which the Basilica is built). She gave to him a small wooden figure of herself and a column of Jasper along with instructions to build a church in her honour. The apparition was the only known occurrence by Mary before her Assumption. 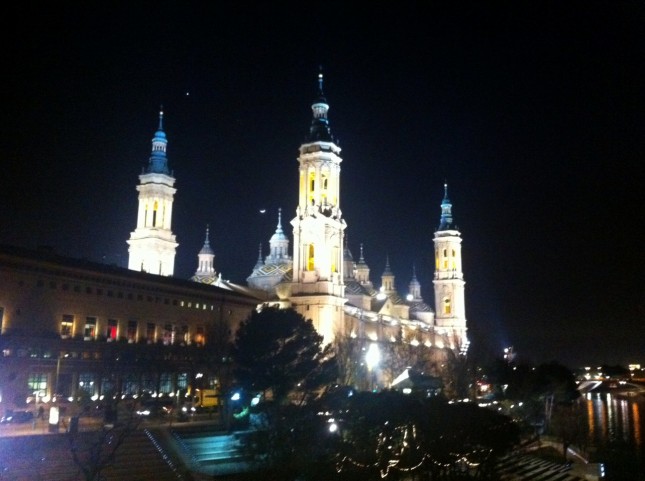 The devoted now flock to the basilica to do their duties, which includes going around the back of the nave to where a small part of the pillar is revealed so that they can kiss the stone and do whatever else it is that devotees do. The pillar all looks like a bit of an afterthought when you take in the scale of the rest of the building, if it wasn’t for the fact I did a bit of reading before I went I would have thought people were attempting to adjust the central heating, bending down in a little hollow around the back of the nave.

There was a mass in progress when I got there, and it was interesting to watch the proceeding, including a little recitation by the choir, so I sat for a few minutes and took it all in. The east chapel which was in use at the time is an impressive dome within the confines of the main building. At the back of the chapel as a backdrop to proceedings is a marble relief of the Virgin which is quite striking, if only because its rather tasteful compared to the other depictions that most Spanish churches contain (which look like some slightly grim version of Madame Tussaud’s.)

One word of warning to the ladies – on both sides of the chapel as you walk around there are large heating vents set into the floor, which provide welcome warmth and a blast of air from below – don’t some in a loose, free flowing skirt unless you want to do a ‘Marilyn’, which would probably not be appropriate in the circumstances!

The exterior of the building is very pretty, particularly at night with its towers and cupolas all lit up, but its so darn big that getting a shot is not easy, and the arc lights that illuminate the plaza out front are positioned such that you get lens flare from every conceivable direction. The plaza is lovely too – a vast expanse of smooth stones and several water features, although not quite clear what they were getting at – at one end it looks like a depiction of global warming with glaciers melting, but jolly and refreshing nonetheless. At the other end is a statue of the artist Goya, who grew up in Zaragoza and returned here to paint. 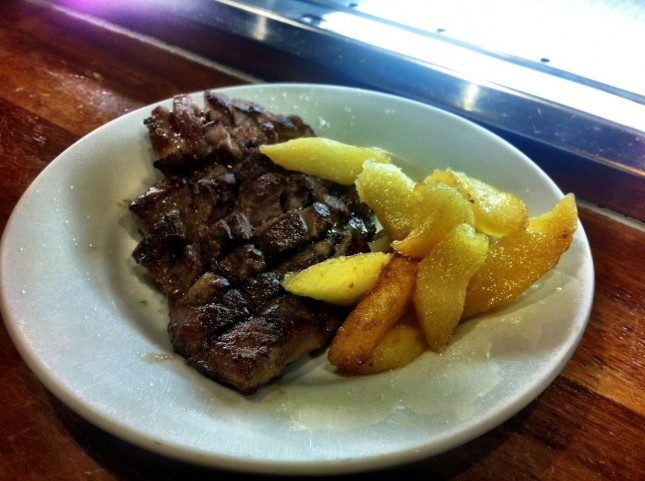 After the sightseeing over, I wandered around the Tubo district which is adjacent to the plaza and is the centre of nightlife in the city. Loads of tapas bars to choose from, almost overwhelming. I tried to use the tactic of seeing which were the most popular, but at 9pm it was evident that it was mostly tourists who probably didn’t know much different. The busier ones were 3-4 deep at the bar, and looked like they did good tapas, if only I could be arsed to fight my way through.

Instead I wandered more, and found a small place in an alleyway that was popular, but not busting, and seemed to be frequented by more local types. I found a space at the bar and had a beer and two tapas, Olives and Anchovies (just two of each) with a little bread, and then Secreto Iberico, which sounded good and turned out to be some roasted fatty pork belly with some somewhat greasy chips – not that I’m complaining – it was lovely! And my god, filling too. Probably the body just saying that’s far too much cholesterol for one evening thanks!

I wanted to try as the locals do and wander the bars for a little tapas sampling, but for over an hour my body was telling me otherwise. I did wander, and stopped a couple of bars for a swift half, but in the end decided that more food would not be conducive to a pleasant walk home, so passed.

By 10:30 more of the bars were coming to life, as is the Spanish way to not go out until the rest of us are ready for bed. I decided with an hour and a halts walk back, I’d call it a very satisfying evening and set off back through the streets to the campsite, getting back about midnight, having walked about 10-12 miles. Bloody good evening if you ask me! 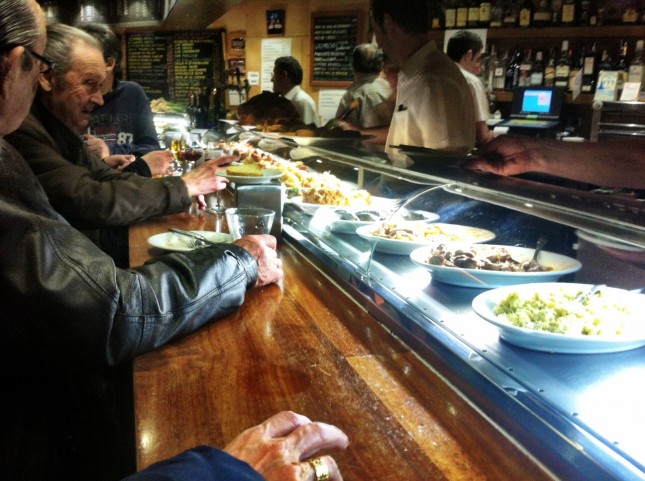 Enjoying Tapas in a bar in Zaragoza

Knackered after all that walking, Saturday necessitated a lie in, and so I decided that I’d spend another day in Zaragoza and catch up on some work, enjoy the sunshine, and finish off the washing chores. Lovely weather here at the moment, the thermometer in the van touched 30 degrees this afternoon, but there was a pleasant breeze outside.

Tomorrow I’m off to the [Bardenas Reales National Park](http://en.wikipedia.org/wiki/Bardenas_Reales) with its desert and moon like landscape, and will probably head on towards Jaca on the edge of the Pyrenees for the evening. That will still give me a day in hand on my return journey plan, and means I can have a bit of a wander around the foothills of the Pyrenees before crossing over, leaving Spain behind with the delights of France ahead.