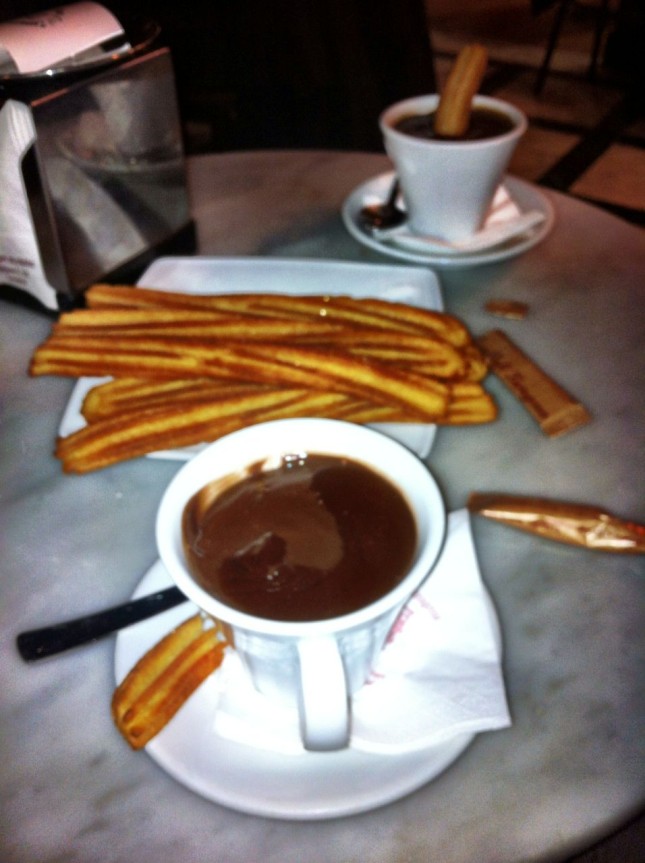 Apologies for the lack of updates for the last couple of days, a combination of work needing to be done and an appointment with a Tapas bar. We’ve relocated ourselves to the municipal campsite in Zaragoza, a place I came to on my own 2 years ago after Mel flew back to the UK and I wandered my way back across Spain and France in the van. I liked it as a place then, and was glad to find that the memories were accurate on the return.

We arrived on Friday intending to hit the town that night, but found in the end that apathy took over as we couldn’t be arsed to walk the 3.5 miles into the centre, or even go to the bus stop and try that option. But you’ve got to have sufficient energy to enjoy tapas, so it was probably for the best.

Saturday we walked in later afternoon and headed first for a fuel stop courtesy of *Chocolat con Chorrus*, which is basically donuty fingers and cup of treacle thick hot chocolate. It’s not a sweet as you might think, and they provide sugar sachets just in case your not feeling hyperactive enough. Suitably refuelled we went for a wander around the [Basillica, which I reported on last time](/life/zaragoza-and-the-basilica-of-our-lady-of-the-pillar). 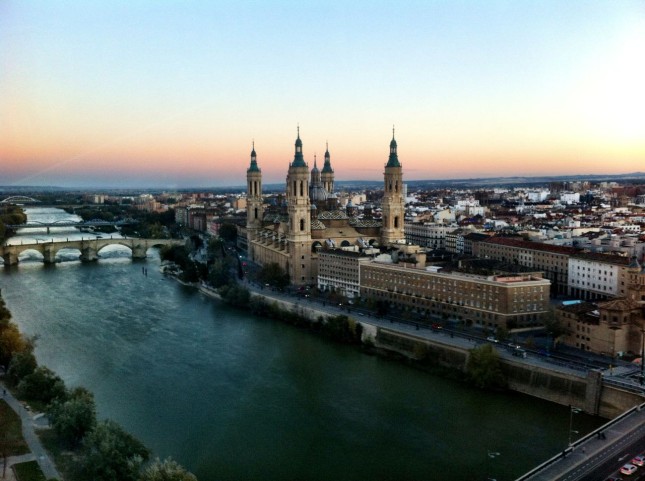 The Basillica and River Ebro, Zaragoza

We wandered the streets, largely because I was trying to remember where all the good tapas bars were from the last visit so that Mel could experience them. She’d thoughtfully located some recommendations on Lonely Planet, so we had something to look for, although the listing we had with us didn’t have addresses. Eventually we stumbled across some lanes that I recognised. By this time places were starting to open up and people were flooding in (about 9pm, as the Spanish do everything late). We were on a cross roads trying to decide where to go and I consulted the list, and Taberna DoÃ±a Casta was right in front of us, one of the recommendations. The guide noted the â‚¬23 bottle of wine and six tapas deal as worth a try, but we wanted to have a drink and a bite in more than one place, so we declined. Also, its probably the most popular place, standing room only and lots of noise, so we hopped across the street to a place whose name I can’t remember and had a very nice glass of wine and a couple of Gambas & Olives which was very agreeable.

Back on the street we headed up a lane to a place that was part concealed by some building works opposite, and realised this was the place I’d been to last time and had such an agreeable time. We decided this was worth a try. Casa Pascualillo is a slightly more family orientated affair and with more seating, but a long bar with a selection of tapas lined up along the top to tempt you. We pulled up a couple of stools and ordered wine whilst we considered what we wanted. While we were taking the barman, who was the same chap who served my last time and looked like the proprietor, realised we were English and started talking, although his English wasn’t much better than our Spanish. I tried to explain that I’d been two years ago and had a dish that was like Pork Belly, and had Iberico in the title. Given that *Jamon Iberico* was on the board above the bar, he took it upon himself to order one for us, which was fine for me but not for Mel. So I had a plate of sliced, cured ham to myself, whilst Mel continued to study the menu trying to figure out what was and wasn’t meat.

The Jamon was very nice though, and given its so thinly sliced, not exactly filling. I was slightly worried by the â‚¬14 on the menu but seemed to remember that the prices didn’t related to what you paid based on the previous experience. On studying the menu further I suddenly realised what the dish was I was looking for – *Secreto Iberico*. Again, SeÃ±or decided that one should be summoned up, which took a little while in the preparation, and Mel managed to get some Calimari to be going on with, plus another round of *Vino Tinto*. It was about this time that I had realised the name of the place we were in, and realised it was on the Lonely Planet list. Apparently, it was voted one of Spain’s 50 best tapas bars a couple of years ago, and so I’d lucked into it last time, and to be honest, pretty much this time.

Eventually the *Secreto* arrived. I was slightly disappointed by the appearance, not quite what I’d remembered, but perhaps its seasonal or something, but the taste certainly wasn’t to be sniffed at and it was thoroughly enjoyable. I’d researched the recipe on my return last time, and its called *Secreto* because its a rare cut from around the legs and along the back, which yields a cut lightly marbled with fat. It is delicious! 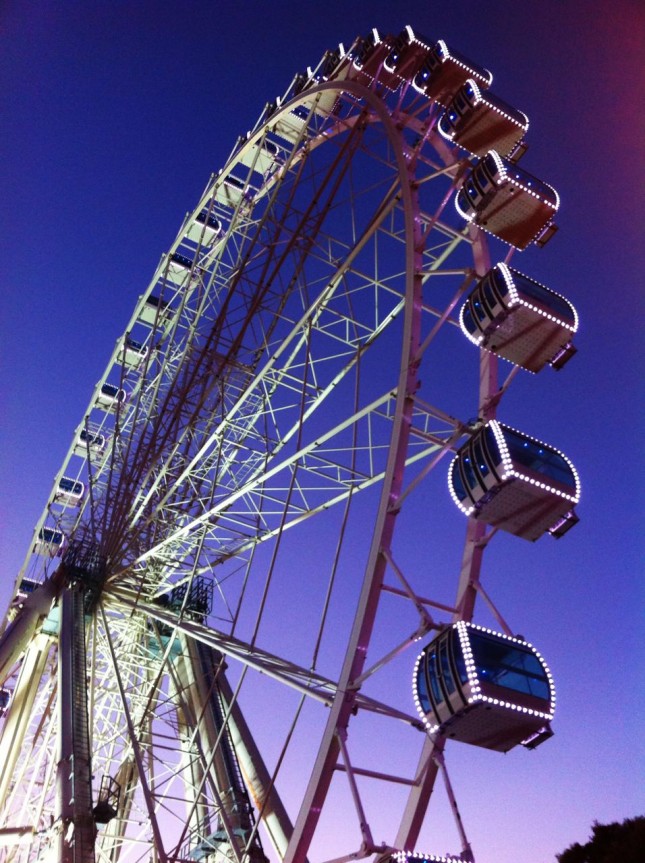 A Great Big Wheel in Zaragoza

We finally emerged around 11pm and the bill was perfectly respectable considering we had several glasses of very good wine. The prices were all less than published on the menu, and we’d got a free glass of wine thrown in at the end as well. The guy who runs it (it says established in 1939 so possibly a family thing) is large and gregarious, and seemed to be helping himself to a glass or two as he held court. The place is festooned with both shipping and bull fighting memorabilia, and he had an uncanny resemblance to a bullfighter pictured behind the bar, so it looks like he’d had a varied career. It’s well worth a visit if you can find it (Calle Libertad, just along from Taberna DoÃ±a Casta which is easy to find because its on a intersection of lanes). Don’t get there early – the area really only comes alive after 9pm, in fact you’d think it was deserted back streets much earlier in the evening.

We took the bus home, although were concerned that it might not get us back before midnight when the site gates were shut. We assumed there would be a pedestrian entrance but hadn’t located one on the way out, but once the bus finally turned up, it was quick and efficient at getting us back into the neighbourhood at â‚¬1.35 flat fare one-way. 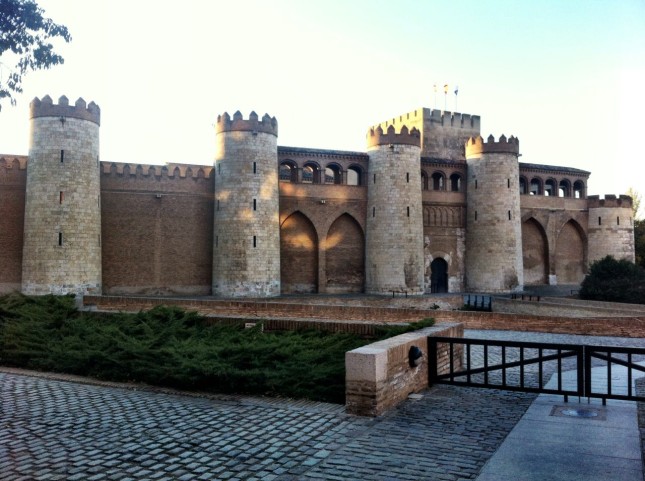 On Sunday we walked in again, this time to the [AljaferÃ­a](http://en.wikipedia.org/wiki/Aljafer%C3%ADa), which is a Moorish Palace that is supposedly second to the Alhambra in Granada. Not that we could tell, as it was shut on Sunday afternoon in the winter months, something we hasn’t picked up from the website when we looked. So we had another wander around the town, and decided to hop on their own version of the London Eye (albeit a bit smaller) which gave a good view out over the city. After a little mooch around the shops, we took the bus again back to the campsite. 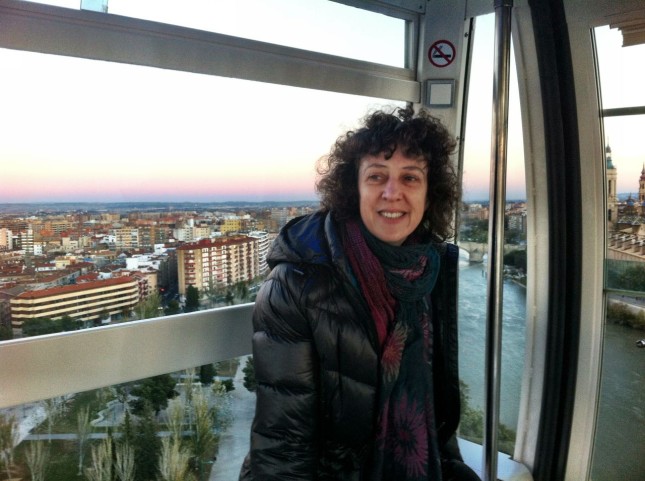 Mel enjoying the view of Zaragoza

1 thought on “Zaragoza: Chocolate, Churros and One of Spain’s 50 Best Tapas”