The build tools are trying to merge the run results into the *.gcda files that are located in the ${OBJECT_FILE_DIR_normal} output directory. You are probably using a code analysis tool on these files, such as CoverStory, and as a result the analysis tool will show incomplete and missing coverage results.

The simple fix is to do a Product > Clean in order to clear out the intermediate files, then re-run the tests, but this can become very tedious. The ‘magic number’ error suggests that the build tools don’t like something about the existing files when it tries to merge the results, and as a result fails to add some of the result detail.

In order to make this problem go away, I’ve found that a solution is to add a build script that cleans out the gcda files on every build, meaning that the build tools don’t have to do a merge. So far I’ve not found no downside to this.

To create a build script to clear out the Test Coverage files,

Here is the shell script:

And here is what it looks like in Xcode. 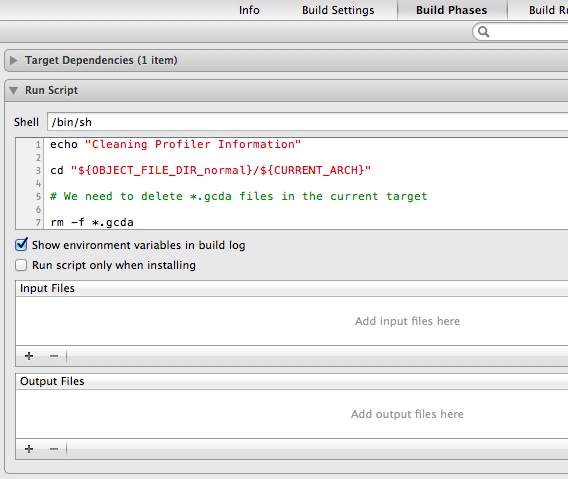 Build Phase Settings with a Run Script to clear Test Coverage files at the start of the build.

When you now run your app or unit tests, the test coverage files will be removed (rm -f) from the output directory, and the project should build, run and merge the coverage results without producing the error messages.

Updated 09/04/2013 Thanks to this response to my post I realised why the error message was creeping back in – I was only clearing the gcda files from the Test Target directories, and not from the Application Target as well. I simplified the script and you now need, as noted above, to insert this script into both app and test targets. As noted in one of the comments, the IFS setting should not be needed in the script as the path is quoted so spaces should not be an issue.

6 thoughts on “How to Fix ‘Profiling: Invalid Magic Number’ in Xcode 4.6 When ‘Generate Test Coverage Files’ is enabled”