Our big day for a big walk, ‘The Wivey Way’, a 20 mile circular walk around the Somerset town of Wiveliscombe. Wivey has been our home for the last 14 years, and we are now, albeit temporarily, leaving it for a life on the road. Travel and adventure on a slightly larger scale. And what a fitting way of saying goodbye to Wivey but to take the opportunity to view it from every angle. We were blessed with great weather, not too hot, and as luck would have it, our fellow walkers homes were alongside the route so suitable pitstops were easily at hand.

Unfortunately the Wivey Way doesn’t pass through many of the surrounding parishes and so some of the regular watering holes are just too far away, so this was a great way of making the day more enjoyable. For those undertaking the way for further afield, a packed lunch and water would be a requirement. There isn’t an online version of the Wivey Way, but there is [a book that includes it, and its eleven other circular walks that comprise it](http://www.wiveliscombewalking.co.uk./Circular_walks.html), the spokes to its rim, if you like. The book describes it as a 23 mile walk, but I can’t quite see how they manage that. You’ll notice that the above map describes it as 18.6 miles, but that is down to the fact that there are straight lines between the waypoints. Having walked the above and tracked the route, I make it just shy of 21 miles. The book describes a walk out from the centre of Wiveliscombe to Washbattle Bridge in the north-west corner as part of it, which probably explains the difference (but it appears not to mention how you get back!). This seems odd given the the large printed version of the map in the town square describes the route shown above, including the in/out section on the eastern side which comes pretty much to the heart of the town. If anyone knows why the discrepancy, do let me know in the comments! 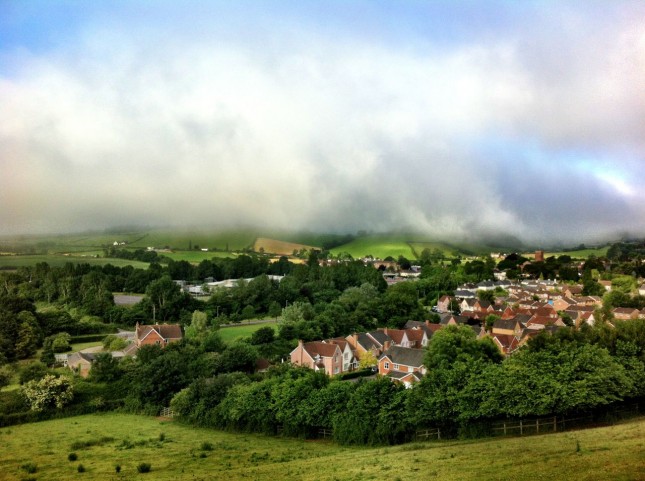 Mist hangs heavy over Wiveliscombe but the sun wins through

We started at 7am from the centre of Wiveliscombe, joining the official route by walking down Silver Street, through the old brewery site and out onto Ford Road to locate the footpath opposite the turn into Burges Lane. Quickly you take a gradual climb to a vantage point to the east of Wivey, looking back at the town laid before you, backed by the hills of the surrounding countryside. Mist hung over the hills tops creating a slightly eerie and foreboding start, but it was to be a very pleasant day throughout.

Continuing east around Castle Hill and on towards Crowford and Cat’s Ash, there was a variety of terrain and a little road work in quiet, peaceful lanes. We saw only 3 cars during the entire day when on the roads, so this makes it very child and dog friendly. Skirting past the village of Fitzhead, we climbed through a field and then down towards Hoccombe, stopping at Hoccombe Bridge (marked FB on the OS map) for what should have been breakfast. I diverted a hundred yards to release a sheep that had its head stuck in stock fencing before returning to the group to wonder where breakfast was. This was meant to be conveyed to us by the breakfast wallahs, but they were nowhere to be seen. I wandered up and down the lane in search, but after the appointed time and without a mobile signal to aid us, we continued along the route and in the direction we hoped they would be coming. As we reached the little hamlet of Hoccombe, they rounded the bend ahead of us, and we quickly tucked into breakfast. 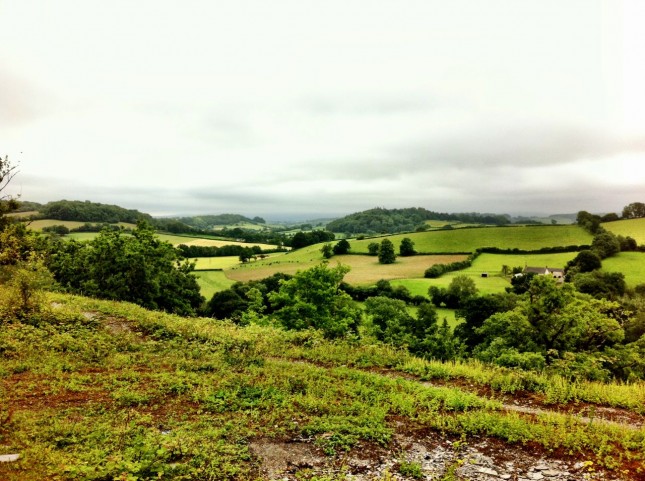 With some of Kate’s scrumptious muesli, sausages, boiled eggs, bread and coffee tucked away, we set off again, turning west towards Oakhampton Quarry. A long climb across fields and a fair stretch of lane past old lime kilns, we crossed the B3188 at Oakhampton Farm and then crossed the fields to the quarry. Able again to long down on Wivey from a new angle, the mist had by now cleared and light, broken cloud filled the skies. As to leave the quarry, the route takes you on a scramble down the old scree slopes which can be quite a challenge whether you are descending or ascending. We opted to follow the forestry track around the corner for a few hundred yards, where you will find a sharp left junction that takes you back down the river and you rejoin the official route. This added a little to the overall distance but is much less challenging if you’ve still many miles to go. 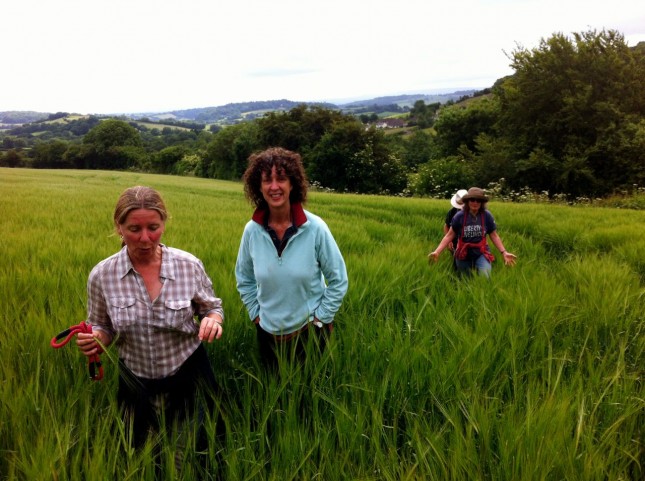 Caroline, Mel, Kate and Paul wading through the Barley

A short climb again out of the woods and across fields to the hamlet of Whitefield before wading through a vast field of Barley (yes, that field), and then as you approach Jews Lane, you will pass through a very enchanting garden belonging to our dear friends. Setting out now towards the village of Huish Champflower you walk above steep sided combe, part forested and part pasture. 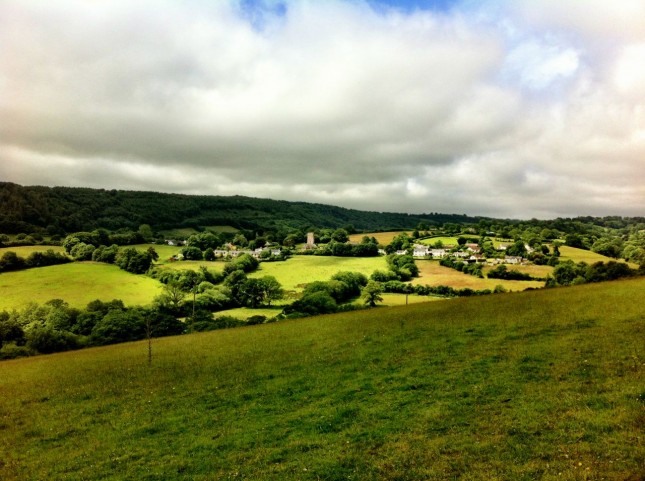 Crossing the fields from Jews Farm towards Huish Champflower

Huish appears before you and you descend a steep path through the woods to the river and a foot bridge before climbing out the other side onto the road. A wander through Huish you rejoin the footpath, taking you across fields around Stookes Farm, before joining the road again and a final descent to the sharp bends and narrow bridge at Washbattle. This was out lunch stop for the day, and we took a little extra time to enjoy the wonderful banquet prepared for us. 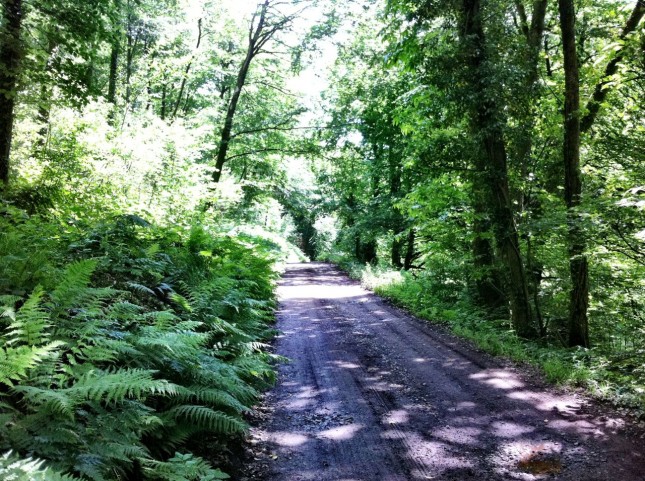 Dappled shade along the river bank between Washbattle and Bulland Ford

The stretch after lunch from Washbattle to Waterrow was the perfect postprandial commencement to the walk. Flat ground through the shade of a woodland riverbank, a great way to ease us back into the walk and allow our food to digest for maximum benefit. Upon reaching Waterrow, the route is somewhat ambiguous, both from the book linked above and from the OS map, which shows no footpath at all. You must cross the main road and head uphill towards Hurstone where you will find a V-shaped stile formed from large stones, which is the start of a permissive path that links you to Hellings Cross. It is marked with the Blue waymarks of the Wivey Way, but is not obvious when you are standing outside the Rock Inn at Waterrow. In fact, even once following the path, you are once again confused when you come across a pond and then a stream bed as to which way to go. There appears to be an alternative route on the right side of the bank, but if you are able to stick to the stream bed (dry in summer) you will after a short distance find a wooden staircase leading you along the remainder of the path to Hellings. Look out along the way for the ‘milestones’ created in wood by local artists.

From Hellings to Walridge Cross is the major climb of the day, about 180 metres in less than a mile. Fortunately for us, as the sun was now shining strongly, a large part of the route is along a tree covered bridleway. Not many opportunities for a view due to the steep banks but once you near the top things open out and you have some good vistas in gateways. The really reward for your efforts is the spectacular views from above Pyncombe Farm looking east over Taunton Vale. Framed to the north by the Quantock Hills, and to the south by the Blackdown Hills, the land between is low and flat, stretching out across the Somerset levels toward Yeovil and Shaftesbury. We had a pretty clear view and must have been able to see a good 50 miles distance, although its hard to make out specific features, its quite conceivable that the most distance line of hills is Cranborne Chase around Blandford Forum in Dorset. 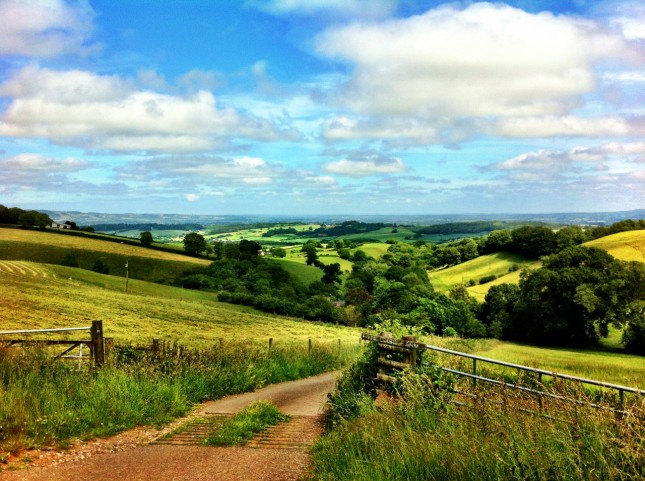 A stunning view from above Pyncombe Farm, looking over the Vale of Taunton

The walk down from Pyncombe Farm was pretty idyllic, but might have had something to do with the fact that at the bottom of the hill was our final pitstop for afternoon tea. A very welcome break by this time, about 15 miles under the belt with another 5 to go. Our last leg was on lower ground than earlier, so no looking more up at the hills than down from them, but across some charming countryside nonetheless. Our final climb of the day was the approach to Quaking House and the old Quaker Burial Ground. Nothing too challenging, but for the somewhat tired nature of our legs. Descending from Quaking House we once again had fine views across Wivey, and a good view of the first leg of our route around Castle Hill. Just taking in the total distance that we’d walked took some doing. 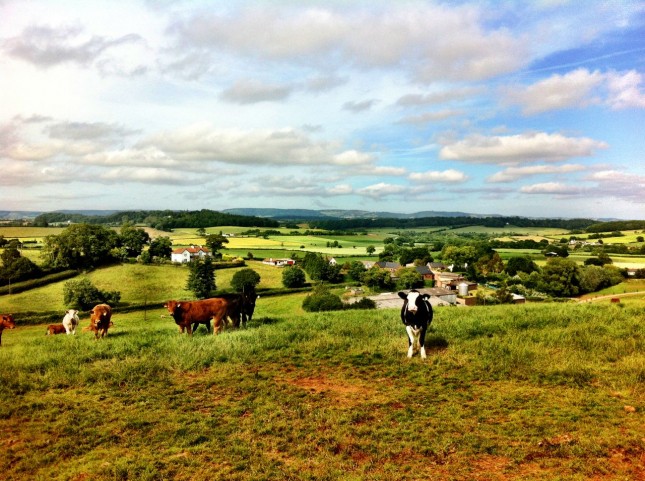 The view towards the Quanktocks from above Nunnington Park

On reaching Manor Garage, we opted to walk up Castle Hill and rejoin our outbound route, as the official route follows the main road into Wivey. Whilst the verges are wide and the road can be quiet, its hardly the most pleasant way to end the day. So once again, as we approach 7pm, we were looking at Wivey as we’d seen it just after 7am that morning. By now though, we were getting beer blinkers and had only one thing on our minds, and our last challenge of the day was walking up Old Brewery Road and the climb to the brewery buildings. Seriously tempted to just pound on the doors of Exmoor Ales at this point and find a large vat to soak in, but we were beckoned in for tea and cake, which was very pleasing. After a brief pause, we set out along Silver Street to the White Hart Hotel for a well earned beer or three and a slap up meal. Very quickly the waves of sleep came upon us all, and it was all we could manage to scramble back to cars and take the short drive to our respective homes and a very contented, deep and rejuvenating sleep. 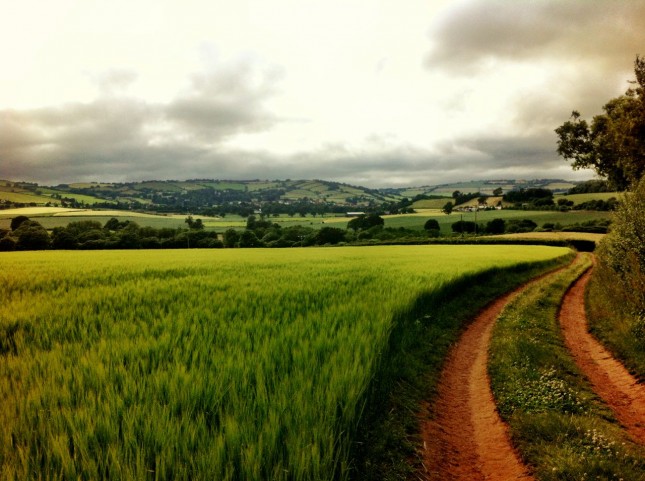 Looking back to Wiveliscombe from below Quaking House