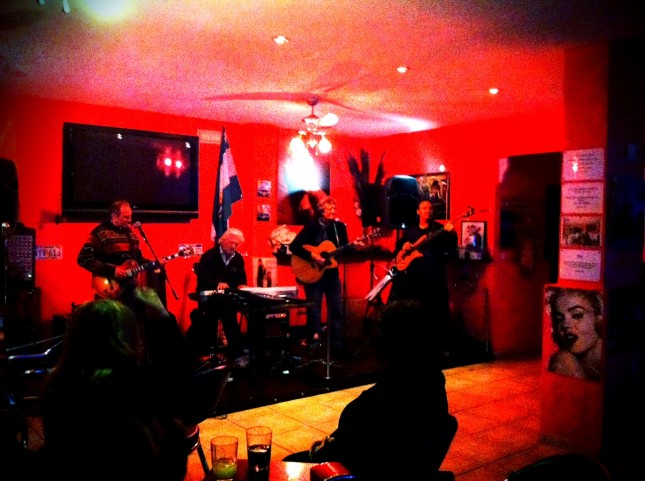 After a dull day (laundry etc) this evening was an introduction to life on the Costas. Malcolm, our resident ‘Happy Camper’ offered a lift into Almunicar, so Mel went along for shopping and coffee whilst I dealt with the washing and dysfunctional dryer. Thankfully the afternoon failed to meet the expectations of the weather forecasters and exceeded the capabilities of the camp clothes dryer.

The evenings entertainment was provided by the bar ‘La Bamba’ in La Herradura, where live music and free buffet was on offer. The place was well attended, almost exclusively by Brits, despite the French owners (shabby chic plus a few), and the Spanish bar staff (hair tied back too severely). I thought I was in some sort of TV fly on the wall, or possibly Eastenders without the murder rate (well not tonight). They were either over 60, and if not, gay as a daisy. I’m not sure what that says about the British, or at least the pub going ones.

The musical entertainment almost slipped into karaoke, but the musical standard was actually pretty good. In fact there were some fine renditions of some hits from the sixties. And it’s possibly the first time I’ve seen a U2 cover bring danced to, but there is a first for everything. The only thing I would say against them is that they rarely played anything at the tempo of the original, a bit like the fact that you rarely see pensioners entering or leaving a post office as fast as someone with a balaclava.