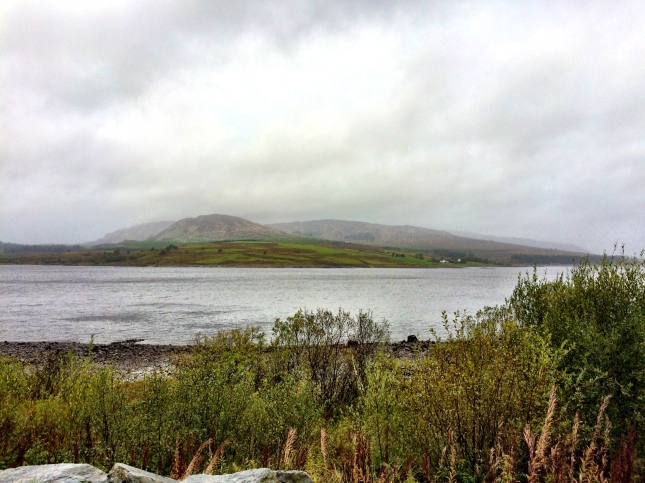 Yesterday, I exercised my Right to Roam. What they done tell you is that a Right is not the same as a certainty, and whilst I was unhindered in my roaming from a legalistic point of view, the landscape got the better of me.

Whilst enjoying a pint on Saturday, I asked the chap I was talking to if he could help me with what it meant to roam, and if there was a route to the top of the nearby hill. He admitted that he didn’t know on the first count, and that on the second the only route he knew was on the far side of the hill. But there was a footpath nearby that might help, but he’d never walked it.

So on Sunday morning I was up early, moved the van a coupe of miles along the coast for a better view of the sunrise, and then set off to explore yonder hill (the picture is not of the hill I’m taking about, more on that later).

I found the path, nicely signed as you might hope, and it took me up a nicely wooded glen, complete with gush stream, but then looped around and tried to bring me back down again. A stock fence stood between me and open fields and the moorland hill beyond, but no gateway or suitable crossing point. I went up the steam as far as I could and found a point that did let me cross, and the roamed across the fields using the gateways. Until I reached the last fields, which was boggy and blocked by gorse bushes. The final wall had a gateway, but the hillside beyond was chest high Bracken and Gorse, with no apparent footpaths. So I have up the attempt on the summit.

1-0 for the Scottish landscape.

Ordnance Survey maps don’t show the footpaths that do exist, because there are no official registers of them. There is a group called Scotways that maintain the way markers, but they don’t seem to provide maps, at least not ones that I can combine with my other maps. How are you supposed to plan a route? You’ve no idea if the terrain is walkable, even if you accept that you can walk where you like.

Roaming is one thing, but it seems to have the effect of limiting access to only the well publicised routes. Anyway, I still managed 8 miles even if I didn’t get to where I wanted to go.

I spent the afternoon driving along the Solway Coast, then headed inland to the Galloway Forest. Just before dusk I found a great wild camping spot in the carpark of a Red Deer park. Not exactly wild deer, but there were a dozen or so including a stag who bellowed a bit, probably because the few acres he had to roam was not very exciting.

It then proceeded to piss with rain all night, often in a very Biblical style. Fortunately my spot was in high and firm ground, so by morning I had not floated away, but the deer seemed somewhat pissed off with it all, despite the addition of several impressive water features to their domain.

The picture is of Clatteringshaw Loch, the best I could get in a brief lull in the deluge, but a suitable watery scene.