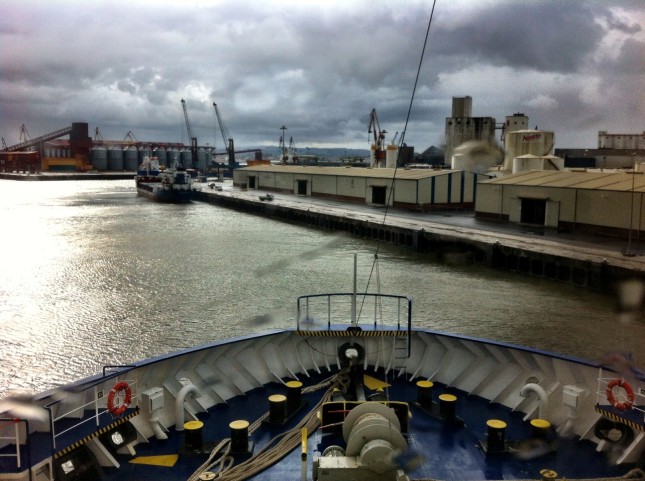 Captain, try not to prang the ship on the dock, there's a good lad

Well, we made it. A moderately eventful crossing. The channel crossing was a little choppy with not too much swell, but once we got around the end of Brittany it all got somewhat more interesting. Enough to decide that food was not so important and that lying horizontally in darkened room was probably a good idea. The whole ship seemed to be creeping and groaning and there were several occasions when the whole ship seemed to grind to a halt as we climbed a swell, only to then thunder down the other side.

The crew didn’t seem to mind, they were in their mess room above our cabin watching the footy. I’d guess on 2-0 and possibly a disallowed at some point going by the commotion. Obviously they were not bothered by the weather, or at least taking their minds off it. I trust someone was actually steering.

Things quietened down past midnight, and when we awoke in the morning it was pretty much plain sailing, so to speak. We arrived on time in Santander to be greeted by some squally showers. After locating the campsite (Virgen del Mar) not far from the port, we sat out a shower and then made for a quick recky of the island hermitage, only to get a thorough soaking. Some locals were at the beach side bar and decided that a punch up and a roll around in rain was in order, not sure what that was about. Anyway, we headed back to camp, battened down the hatches and had an enjoyable supper.

Going by the wind and rain lashing the side of the van I’m glad we had the crossing yesterday, I think we got the better of it. Tomorrow we have made plans to head for Bilbao and the Guggenheim museum in the hope of avoiding the worst of the weather (another inch forecast tomorrow). Mind you, we might get wet walking to and from the metro, so that might not work quite as expected.

Still, it’s nice to be here at last even if the weather isn’t quite as we’d hoped. It should settle down in a couple of days, and that might give us a chance to plan the next few days and general direction.

2 thoughts on “Life on the Ocean Wave”