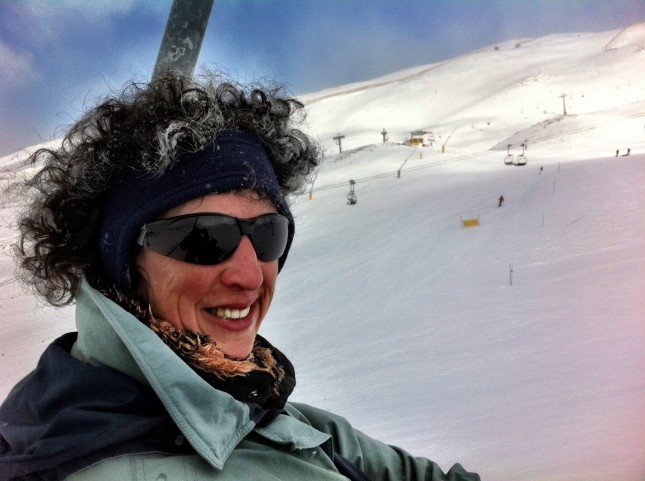 Mel showing her excitement at skiing once again

Finally, after over 3000 miles of wandering around France and Spain, we finally get to the thing that we most like to do at this time of year – Ski! This was one of those special promises as well – after avoiding the worst of the British winter, enjoying bright and sunny if not always warm days, to be able to drive up into the mountains and enjoy some of the white stuff is a great treat.

Having to wait until after 1pm when the winter sports insurance cover kicked in was a mild inconvenience, and as it turned out, having sussed out the place on Monday, getting on the slopes was a doddle. We stopped in the heart of the village to pickup lift passes, then motored up the hill to the Motorhome parking. Spent half an hour farting about trying to get as many layers on as possible, skis out of the locker and a short waddle across the carpark to the slopes. We needn’t have stopped in the village as there was a ticket office open by the carpark (contrary to the stated times that we checked 2 days ago).

The snow was in good condition, and the pistes themselves, for the most part, are wide and level. i.e. Not too many potholes and diverts like some places we have experienced. What this means is that its a joy to whizz around the place even in low light without having to worry about being knocked off balance by something you can’t quite make out. 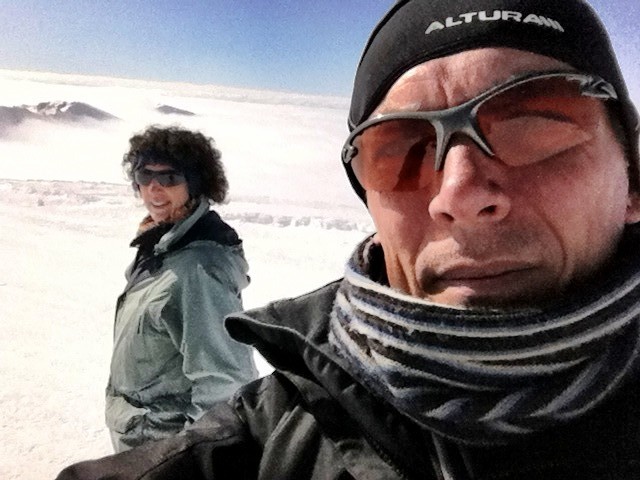 Mel is wondering why Ali G has borrowed the camera

Sod’s Law dictates that matter how good the weather is whilst you are kitting up, no sooner than you place ski on snow but it is guaranteed to change for the worse. And that’s what happened. Beautiful clear blue skies, then the clouds descend for a full on peasouper. But it didn’t last long. The clouds hung about for the rest of he day, but they were patchy and there was a fair degree of sunshine.

We made our way to the very top of the resort at about 3200m, just short of Veleta’s peak, passing through the thickest of the cloud whilst sitting on the chair lift. It’s always slightly disconcerting when you are sitting 10m off the ground, suspended by a bit of wire, and you can only see the chair in front of you. 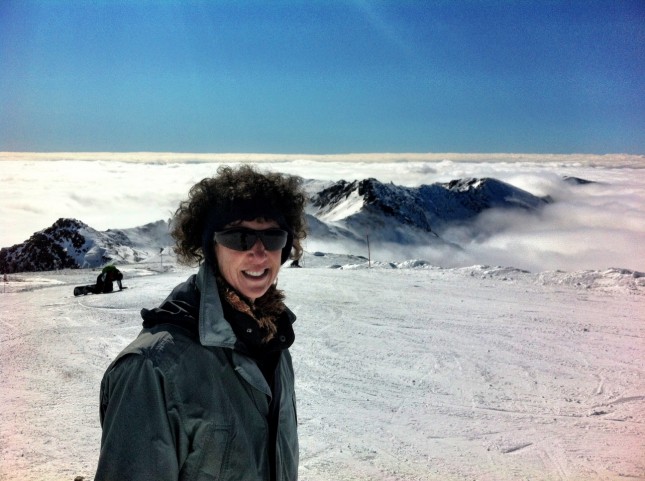 Once we broke through the cloud we were rewarded once more with that beautiful clear sky and the ‘view of the Gods’ stretching out before us. We could see for miles over the tops of the clouds, only a few near peaks poking out. It was like flying in an aeroplane. You can, on a clear day which alas this was not, see the north coast of Africa, but we were very happy with what we could see.

We made our way slowly down, distracted by the awesomeness of the view, not wanting it to end. Once more into the clouds, then out the otherside and a run all the way down to the base of the resort. Time for a couple more runs round, and then we had to head back towards the van before the lifts started to close. We were both a little ragged by the time we got there. I felt particularly dehydrated – just because its cold out, you forget that you are still perspiring under all that clothing, and of course the cold makes you disinclined to drink enough. Also, rushing out with only a few bits of chocolate and dried fruit was probably not enough to sustain the activity levels.

But all in all – Great fun!

3 thoughts on “Skiing (At Last) in Sierra Nevada”