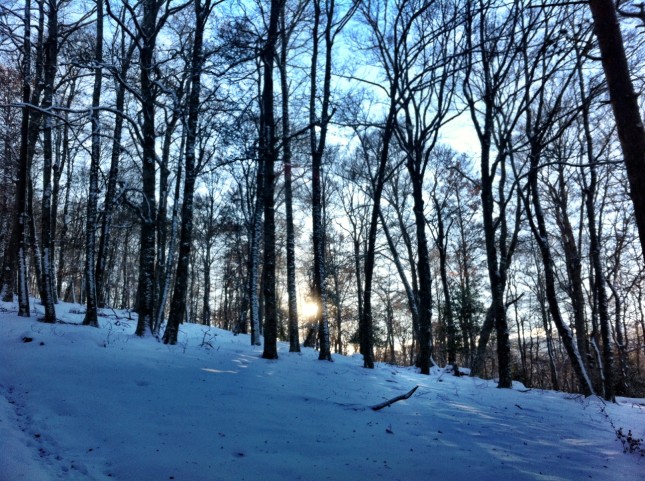 The sun came out today, and so we too emerged from the campsite in Halo and set off to explore. We headed first toward Logroño, provincial capital of La Rioja, passing through some charming scenery featuring rolling vineyards, snow capped mountains and settlements perched atop mounds and hills.

Logroño itself was typically industrial looking, sprawling warehouses and lough industry no doubt necessary to support the regions wine production. We drove on past, turning south and into the heart of Rioja. The vineyards give way to gorges, mountains and massive plateaus and you become vaguely aware of going up in the world.

We turned off the road towards Ortigosa and stopped by the dam at the head of the Embalse de Gonzalez Lacasa, now otherwise known as ‘Spanish Clatworthy’. A bit windy and exposed up here, snow on the surrounding peaks, and are those firebreaks through the trees up there or ski runs? Can’t quite tell from here.

Back to the main road and onwards towards a campsite in the village of Villaslada de Cameros, or rather about a mile and a half outsiders we turn off he main road, a thick set Spaniard is wandering up the road. As we approach he flags us to stop. Is he pissed we ask ourselves looking at his swagger? Is he violent, looking at his distinctly scarred and distorted nose that looks like it been reshaped by Mike Tyson or a brick? No, it turns out he’s helpful and telling us that the road is blocked ahead, although our Spanish isn’t good enough to determine by what or how far ahead. We thank him and carry on and find the road clear all the way to the campsite, so no worries.

Later we go for a walk up the hill and soon find snow several inches deep, so the road was probably blocked by snow further up, and the chap probably hadn’t thought we were only going as far as the campsite in our campervan.

The campsite is pretty much deserted (a recurrent theme, it’s amazing that they are open at all). The owner asks us to find a pitch and he’ll come and switch on the electric, which he does, but as we go for our walk he is attending to a massive generator (the kind used when whole villages loose mains power) with a hammer (or possibly a wrench requisitioned as such). That can’t just be for us can it?

After the walk we stoop off at the bar for a glass of vino tinto and a chance to test the wifi. Alas the van is too far away and blocked by static vans from picking up the signal, which is a shame as it a 20mb/sec connection which is just amazing considering there is only 2G mobile and we are 1200m up a hill and a long way from what might be called civilisation. I think tomorrow evening might be spent in there with the laptop and more of that vino tinto (wifi free, two glasses of vino €1.60). This is what I call civilised!