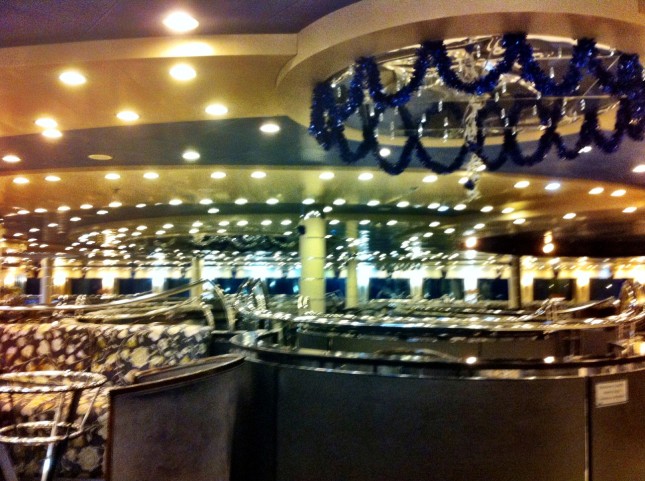 As you can see the cheesy lounge singer is really packing the place out. In fairness, most of the other passengers are lorry drivers and they have sensibly gone to bed, or are propping up a less cheesy bar.

It’s now 45 minutes after the published sailing time and we are still docked, although it did appear that the captain was here listening to the opening set so that might explain the delay.

There is now a throbbing come from below decks, so there is a chance we might be going somewhere, or the rather large lorry driver who was propping up the bar earlier is now mustering a bowel movement.

Update: We are now moving proper, we’ve left the bounds of the harbour and now sooner had we done so but the captain was back for a second helping, although he’s disappeared again, maybe off to bed as there is obviously nothing better to do now that there is several hundred miles between us and the next bit of land (assuming you are going in the right direction in the first place.) The cheesy lounge singer is still going, he keeps stopping between songs which makes me think that he’s exhausted his repertoire and is only keeping it up because we are sitting here. I’m riveted by it, I can’t go because its so bloody funny!