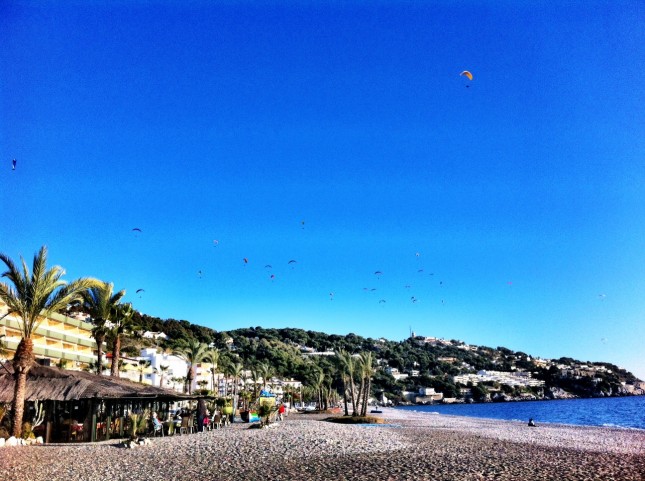 The wildest part of our wild camping experience at SalobreÃ±a was the midnight chorus of howling dogs. I’m not sure what set them off, probably one of them pinning at being outside, then they all got going, shortly joined by a chorus of shushing owners, then a dog fight under them van next to us. All very comical really. Fortunately the remainder of the night was peaceful.

The ‘site’ is perfectly reasonable, just a grassed over parking area, with people ferrying water and chemical toilets off to the nearest public loos. Going by the ruts near the entrance, I would imagine it can get soft going and there was evidence of a tractor having been in, presumably to extract some unfortunate soul.

We decided to move on as we needed water and electric, and also an Internet connection. Unfortunately it looks like our inverter has packed up, which means we don’t have the means to power the external antenna without a mains hookup. Still, we’ve not really used that very often, but it might prove a pain on the return through France.

So we’ve now moved a little along the coast to La Herradurra, which seems very pleasant with a nice arced bay. We popped out for a reckie on the bikes this evening, and the sky was full of paragliders, which seems to be run from a hut on the beach. It made quite a spectacle.

I suspect a proper bike ride in the hills tomorrow, although we need to sort out some wifi – the campsite doesn’t seem very clued up, and my setup is refusing to connect at the moment, so I may have to go and find a bar/cafe with wifi to get some things transferred.

Really annoying because this blog got hacked at the weekend (I caught it quickly and it didn’t represent any risk to viewers, only those redirected via a phishing scam) and its all sorted now, apart from redirected traffic which is still hitting the site. I need to do some work on nailing things down. It looks like the source of the problem was a hack on one of the web hosts account databases. They claimed nothing had been gained by it and forced a password reset, but on the same day this hack turned up. An unlikely coincidence.