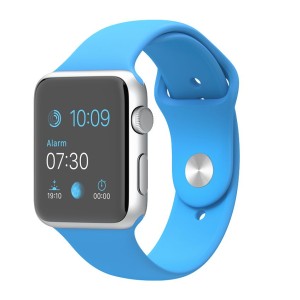 Yes, I succumbed! Well, not much surprise there. Actually, not that hard a decision, I was happy to wait a bit till launch frenzy and shortages died down, and was able to just walk into Apple Exeter on Saturday and get straight to a try on and purchase without any hassle.

I’d already been for a try-on appointment about a month ago, so knew what I was looking for, and really it was just a quick check to make sure I was happy with the size and band choice. Not tempted to go for anything other than the cheapest model, as I’m fully expecting the Watch to get a hardware refresh before too long, and didn’t want to make a big investment in version 1. This was really about trying it out and working out if it would work for me.

Ironically, I’d given up wearing a watch over the last couple of years, given that I always have my phone on me and didn’t need a watch just to tell me the time. What’s given me a new sense of purpose for a ‘watch’ is the fact that it can now do more. I’m seeing potential benefits in how I track fitness and health metrics, and as a navigation aid whilst out walking, although I’m not expected too much one that front in these early days. Apps will need to adapt and improve before the real benefits arrive.

It’s more comfortable that I thought it would be. During the try-on I was concerned that the strap would be uncomfortable and potentially sweaty during exercise, but in fact I’ve found it to be fine in that respect so far. Within minutes of it being on and doing other things, I’ve more of less forgotten its there until I get a notification as a reminder that its there!

I’m inclined to think that the cover glass is a bit too reflective compared to a conventional watch. Sometimes its a little hard to see in bright sunlight, especially when text is small or low contrast (although thats a software choice so fixable for as developers get a better feel for usability). Its worth bearing in mind that most third-party Watch apps are fairly trivial at the moment as they were developed without the benefit of having hardware to hand, and in some cases developers have quickly iterated to better suit real world usage. Some are still lagging behind.

One thing thats come as a surprise is the utility of Siri on the wrist. I’d not really used Siri much on the phone, an equal dose of poor speech recognition in earlier iOS releases, self-consciousness, and the reliance on good Wifi/mobile coverage to get meaningful results. Now that our local mobile coverage has been upgraded to 4G that actually works, using Siri is much more reliable.

I’m finding that recognition quality and speed is pretty much near accurate, not just for simple phrases, but free-form text like reminders. To activate Siri, you can either hold the digital crown button, or say ‘Hey Siri’ as you rotate the screen towards you and the screen activates. You don’t need to pause after ‘Hey Siri’, just keep going, for example, ‘Hey Siri remind me to put the bins out at 9am’ and the reminder is quickly created.

Same goes for quick replies to texts, which I found worked well, particularly when driving. No more illegal texting whilst driving!

When you start a specific exercise activity, you should tell the Workout app that you are doing it. So for me, going for a walk means I engage a ‘Outdoor Walk’ activity. This tells the watch that it should use the heart rate sensor more frequently than the normal 10 minute interval. Unfortunately, over longer workout periods, this has a noticeable hit on battery life. During a 4 hour walk on Sunday, battery went from 90% to 30%, so I wouldn’t have got through the rest of the day without a recharge, and given that I often walk for 7-8 hours at a time, I’m going to need to consider taking the charging cable with me for a quick boost half way. Not so much of a problem, but highlights one area where the technology is still in its infancy.

When you think about it, it shouldn’t be necessary to check heart rate all the time, or to tell the Watch specifically when an activity starts, although you get the benefit of pace and calorie metrics during the workout when you do. Apple should be able to optimise this so that the movement sensor works out when you start more constant activity, and adjust the heart rate sampling accordingly.

Today I’ve been working most of the day and not moved from the van, so the activity circles have barely moved from their starting point! It’s prompted me to stand once and hour, and that’s actually made it quite clear how long I can sit without significant movement throughout the day. I know that last week there was at least one day where I clocked up 9 hours without moving other than to make the tea, which quite frankly is hardly going to be good for anyones health! So I’m hoping that the Watch plays a significant part in reminding me to be more human and less machine.

Most of Apple built in apps are of an expected quality and usefulness, but everything is quite limited in functionality. Notifications and voice control are key to the experience. There isn’t much point in doing lots of input or viewing things in detail, and other developers need to understand this. Take Evernote for example, who show small thumbnails for attached documents, yet there is no way of accessing them (or point in doing so). Showing them just slows down the user interface. Also, the search facility is fairly unusable, as the speech recognition wants to put additional grammatical words into what you say to search for, which tends to be keyword oriented), and then the results don’t seem to show what should be obvious matches.

### Integration with the iPhone

Generally things work as expected, but there is often a slight delay whilst the Watch talks to the phone and visa-versa, and you can often go faster than the UI so it affects usability. This might be improved when watchOS 2 is released later in the year, when the apps can be native rather than just extensions of the iPhone host app. Continuity and Handoff are quite useful where enabled, and you need to move from doing something on the Watch to completing the task on the phone.

Handling phone calls from the Watch is interesting, although not had much chance to play with this yet. It got a bit confusing when wearing the Bluetooth headset with an incoming call, I didn’t know which device to answer it on! Need to remember to do as before and press the answer button on the headset, but because its tempting to look at the watch to see who is calling, you are then tempted to answer it there. Having made the mistake, it was nice to know that pressing the headset button caused the call to be handed off, rather than disconnected!

Likewise on an outgoing call, your inclined to use the favourites list on the watch to initiate the call, but then you are talking through the watch, but again, handoff to the rescue! All seems obvious after the event, but slightly confusing and almost magical on the first try when it worked.

Anyway, time to get off my butt and get some exercise, the Watch is nagging me again!