The journey along the coast path started a little east of the official start point in Minehead. As we were currently camped with the motorhome at Old Cleeve, that seemed like the best place to start. Officially, the walk along the coast here is part of the Somerset Coast Path, and I believe there are plans to try and officially extend the [South West Coast Path](http://www.southwestcoastpath.com) east of Minehead, and east of Poole in Dorset on the southern side of the peninsula.

After crossing the fields to Blue Anchor, you can then follow the footpath along the edge of the beach, passing by some of the beach huts and holiday homes, views across to Dunster Castle, and the golf course at Minehead. Eventually you reach the edge of Minehead and walk along the sea front (or beach if the tide is out) towards the old harbour and the official start point of the South West Coast Path. Despite the dramatic skies, the weather was kind and no rain came our way. 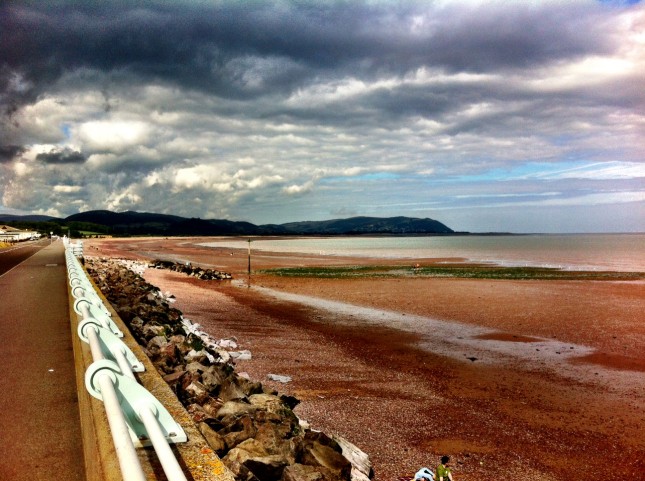 Broody clouds over Blue Anchor, but no rain for us

On reaching the harbour we decided this was a good chance for lunch, for there is little civilisation once you climb up over North Hill out of Minehead. The pub on the edge of the harbour was closed for lunch, and so we opted for an all-day breakfast in the cafe just up the street. This seemed like a good idea to fuel us for the climb up over the hill. Having already covered 5 miles, all be it on the flat, we were hungry chaps.

Rested and refuelled, we set off for the climb up North Hill. It starts out gentle but does get a little harder, but then we, or rather I, made a navigational error and we parted company with the path. We’d just passed through a gateway and looking at my GPS map we appeared to be at a turning point, and there was what appeared to be a path following a fence line. It was well trodden initially, and we were obviously not the first people to make this mistake. After a couple of hundred yards we had to scramble up hill to get around a fallen tree, and then the path really didn’t look much like a path anymore, just a series of animal tracks. We should have doubled back, but the GPS still looked right, but then I was working from 1:50,000 scale maps, and we were probably only about 100 metres from the real path.

One treat on this diversion was seeing some deer running away from us, and getting some nice views of the coast line, but scrambling through the heather and bracken was much harder work than it should have been, and my travelling companion ended up on his arse more than once. After about half an hour of this mucking about we finally found the proper track again, and from then on it was plain sailing.

After descending from Selworthy Beacon to Bossington we took at rest at a cafe for tea and cake, before setting out across the salt marshes for Porlock Weir. We were pleased to finally arrive at the Ship Inn (Bottom Ship as its known, to distinguish it from its sister pub of the same name in Porlock itself), basic rooms, basic food and ales, but welcome after about 14 miles of walking. We ate, drank maybe one too many beers, but we were pretty happy with the efforts of the day.