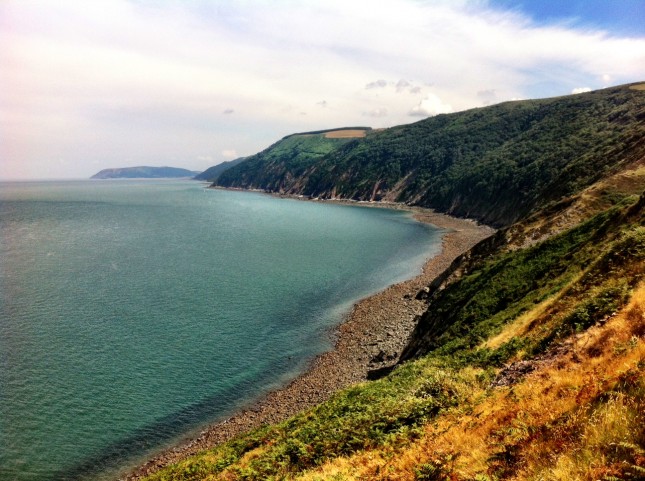 Looking back from near Countisbury, Selworth Beacon in the distance

Today was interesting, largely because for most of it you can easily forget that you are walking a coastal footpath. The route spends quite a lot of time in the woods, and whilst the sea is never too far away, you often can’t see or hear it, and so it feels much more like an Exmoor walk than a coastal one.

Passing the aptly named ‘Desolate’ and above Countisbury Cove, your walking amongst what i think were Laurels which seem to have taken over the path, although someone had been through with the hedge trimmer fairly recently, but they are enough to prevent much view of the coastline. Finally you clear them and approach Foreland Point, and it seemed rude not to take the detour to the lighthouse which gives a good view back along the coast so you can see what you’ve achieved so far.

My travelling companion was by now starting to loose the plot, and asking him to take the narrow track around the western side of the point was probably a little bit more than he could handle. The promise of a pint and a sit down in the pub at Countisbury was about all that was keeping him going. That track is steep and narrow – fine on a nice sunny day like it was today, but you wouldn’t want to do it when the weather was being unkind.

After a stop for a refresher, we did the last couple of miles downhill to Lynmouth and treated ourselves to an ice cream by the park before heading off to find the B&B for the night. The B&B was slightly odd, a little Faulty Towers in the making, and the shower in my room was so pathetic its description wouldn’t have passed the Trade Description Act. We went out to The Rising Sun on the quay, recommended by our hosts, and despite it being rammed were lucky enough to get a table straight away, and sat down for a very enjoyable fish supper and the inevitable few pints of quality ale. I can certainly recommend the place at any time, but particularly after a days walking.